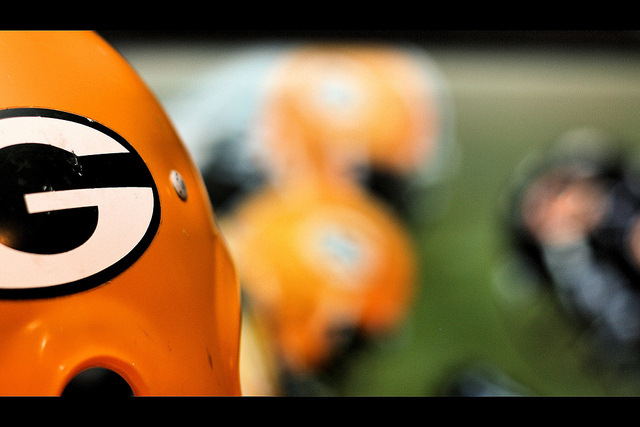 Three of seven NFL experts at CBS Sports picked the Green Bay Packers to represent the NFC in the Super Bowl. Zero of those seven experts picked the Seahawks. Like it or not, they are far from alone. Green Bay is a chic pick to make a Super Bowl run this year. Any team with Aaron Rodgers at the helm has a shot to go far every year. But the Packers were not good enough to win with him last year, so what has changed? Let’s take a look.

Rodgers is the best in the game. He is efficient, competitive, accurate, agile, strong-armed, and smart. He owns an insane career passer rating of 104.9. Any flaws in his game are microscopic. The Packers have always complimented him with talented receivers like Greg Jennings, Randall Cobb, Donald Driver, Jordy Nelson, and Jermichael Finley. Last year, they added one of the most powerful runners in the NFL in Eddie Lacy. It made for a more balanced offense than the Packers have had in recent memory, and kept defenses from committing all of their attention to Rodgers.
Even with Rodgers missing seven games due to injury, the team still finished 9th in the NFL in scoring and 4th in yards per game.

A full season of Rodgers and Lacy playing together is bound to result in a lot of points. Randall Cobb also missed a ton of time, and is back to full health. They are also implementing a faster paced no-huddle style akin to what Chip Kelly has done. The offense, though, lost some key talent that is not returning.
Receiver James Jones left in free agency. Finley has not been medically cleared to play, and is without a team. Starting center Evan Dietrich-Smith, who played well last year, moved on in free agency.
In their place, the Packers drafted receiver Davante Adams in the second round and will elevate Jarrett Boykin who played well last year. Andrew Quarless and Brandon Bostick will step in at tight end. JC Tretter was supposed to be the starting center, but is injured and so rookie Corey Linsley will start.
None of those appear to be improvements over their predecessors. And, in the case of tight end, a once Pro Bowl-caliber element of the offense is now below average.

That dynamic Packers offense in 2013 was flanked by a pretty miserable defense. They ranked 24th in points allowed (26.5), 24th in yards allowed, 28th in opponent yards per play, 29th in yards per rush, 25th in yards per pass, and 23rd in takeaways.
There were missing some key talent when Clay Mathews was out or playing hurt a good chunk of the year, and cornerback Casey Hayward missed almost the whole season. Still, that is nowhere near enough to explain how bad this defense played. Only three players on defense managed a rating of over 1.0 in the ProFootballFocus grading system. Only one, defensive end Mike Daniels, was among the better players at his position in the league. On the flip side, guys like BJ Raji, Mike Neal, AJ Hawk, Datone Jones and more, were rated -8.0 or worse. By way of comparison, Seattle had one player, Chris Clemons, rated worse than -8.0, and had 19 players rated higher than 1.0.

Mathews and Hayward are back to full health. The team added big name free agent Julius Peppers to play outside linebacker in their 3-4 defense. Safeties Jerron McMillian and M.D. Jennings moved on, and second-year player Micah Hyde has been elevated to a starter. They also spent their first round pick on safety Ha Ha Clinton-Dix.
Raji is out for the year with an injury, and free agent veteran Letroy Guion will play nose tackle in his place. Datone Jones also moves into the starting lineup at defensive end.
For all those changes, it is hard to see where the Packers will be more stout against the run. Peppers, for all his pass rush prowess over the years, has rarely graded out well in run defense. Guion is a below average player who sometimes drop to well below average. Jones, who I loved coming out of UCLA, has great quickness as an interior pass rusher but is not the most stout against the run.
The Packers secondary will be one of the best in the NFL in coverage, but again, how will they do against the run? When you are 29th in the NFL in yards per rush against, there is a significant problem. I don’t see significant solutions here.
There is some rumor that defensive coordinator Dom Capers has implemented a new twist to his scheme that allows his linebackers to be used in different ways. Mathews is going to be allowed to rush from multiple places along the line, more of free roamer. The Packers were so serious about this change that they held more private practices than recent years to keep it under wraps.

Expecting the Packers to bounce back from an 8-7-1 season makes sense. Many teams simply will not be able to contend with their offense. I have trouble, however, seeing how this defense will be better than average.
If you cannot stop the run, your great pass rush and secondary are a lot less valuable. The Packers appear weak up the middle of their defense. Guion and Hawk will face what has become the strength of the Seahawks offensive line with Max Unger, James Carpenter and J.R. Sweezy. Seattle is almost impossible to beat when they are able to run with confidence.
The Packers will look to isolate Mathews on Justin Britt in passing situations, and that could be a mess if the Seahawks do not give Britt help with a tight end or running back. It will be a great early test for the rookie right tackle. Russell Okung has faced Peppers multiple times in the past, and fared quite well against him.
Rodgers is so good that it is still mind-boggling to think that the Seahawks held him to 12 points the last time the Packers came to town. Jordy Nelson was a non-factor (2 rec, 19 yds) in that game. Finley, Jones and Jennings were the leading receivers in that game for Green Bay, and none of them are on this squad.
There are positive reviews on the rookie center Linsley, but his first in-game snap to Rodgers will come in the din of CenturyLink field. They did not play a single snap together in the preseason. Just getting the communication down between those two will be a challenge, but then he has to block guys like Brandon Mebane, Kevin Williams, Tony McDaniel and Michael Bennett.
The Packers tight ends will not threaten the middle with speed. That leaves Dan Quinn with options on how to help with the receiver who poses the biggest threat to Seattle, slot receiver Cobb. The Seahawks may be without Jeremy Lane, and even if he plays, Cobb is a handful. Byron Maxwell and Richard Sherman will be asked to handle their guys 1v1 in many cases, so their could be safety or linebacker help for the slot corner.
Lacy is a great young back who will test the Seahawks tackling right away. This game may come down to whether Seattle can hold the Packers under 120 yards rushing. If they can hold Green Bay under 100 yards on the ground, this game might get ugly for the Packers.
First games of the season are always tough. Seattle appears to have a number of key advantages, the biggest of which is playing at home, that point to a solid start to the 2014 season for the Seahawks.