THIS WEEK
The rise of the AFC? Cincinnati, Denver and Houston (yes, Houston), occupy the top three spots in this weeks rankings. Nobody can accuse me of being biased. Seattle took a big fall, but Detroit, Tennessee, San Francisco, Minnesota, Atlanta, Pittsburgh and the Jets fell further. The Bears at #5 does not seem like it will last, and Washington at #7 should grab every Seahawks fans attention as many were hoping for an easier game in a couple of weeks.

For those wondering how San Diego could be so far down in the rankings after beating a strong Seattle team, it comes down to their deplorable defense that is allowing a 112.7 passer rating to opposing quarterbacks and 5.6 yards per carry. Had the Seattle offense seen the field a typical amount of time, they might have hung 40 points on that team. 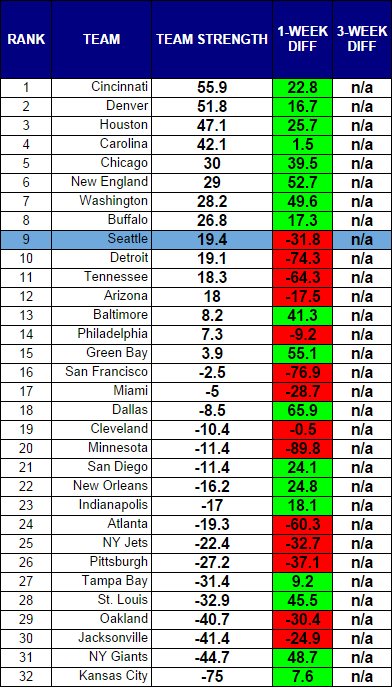