THIS WEEK
Three weeks in, and the rankings continue to have some unfamiliar names near the top. The AFC holds the top two spots, with the Bengals lapping the field right now. New England being #2 was so surprising that I had to double-check my numbers. They barely beat the Raiders and Tom Brady is not playing great football.

It turns out they are holding opponents to a 57.4 passer rating so far, which is just behind the Bengals (56.9). That gives the Pats a large passer rating differential despite Brady having low numbers by his standards. They won’t be able to play David Carr every week, though, so their spot feels tenuous.

Six of the top ten teams are NFC squads. The Bears own the top NFC ranking, thanks in large part to their surprising secondary play (71.0 opponent passer rating). That defense is just not good enough to last, so I expect them to drop.

The Broncos had the second biggest drop of the week thanks to the Seahawks. They have just a three point differential right now (25 ppg vs 22.3 ppg). They are certainly not off to the dominating start they saw last season.

Atlanta had a rout, and lead the NFL in scoring at 34.3 ppg, but they are allowing opposing quarterbacks a lot of success (91.7 rating). It is hard to take a team too seriously that is getting attacked that effectively.

Seattle is holding steady, but is well off their pace of last year when they were consistently over the 50.0 mark in team strength. Their offensive numbers are all up, but the defense is allowing a lot more points and a much higher passer rating. Much of that could be due to the quarterbacks they have played, but the team must prove it.

The Seahawks next opponent comes in at #10 this week. Their offense is strong, but their defense is weak. They are allowing opponents a 99.3 passer rating, and now have lost CB DeAngelo Hall for the year. Any team that can slow that offense should beat the Redskins. 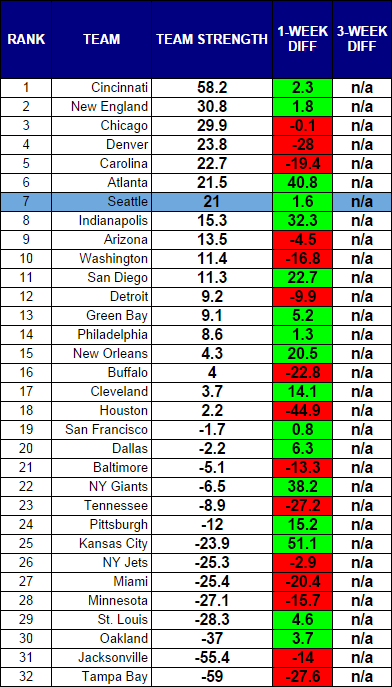 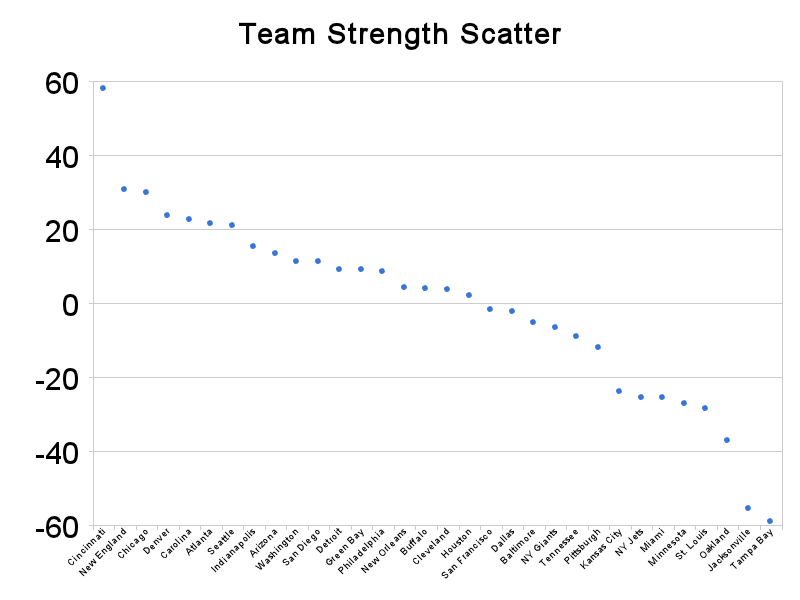