THIS WEEK
No team is accelerating faster into the home stretch than the Seahawks, who climb into the top five, their highest ranking since week five. They are just beyond the elite tier of teams that includes the Packers, Patriots and Broncos, but another performance like the last two weeks would undoubtedly put them in that class.


Seattle is nearly plus-10 in passer rating differential after being in negative range just a few weeks ago. That has been their biggest turnaround. Point differential has obviously also increased, while their league-best run differential continues to hold relatively steady.

The Eagles remain a team that defies the rankings as they are 18th with SOS factored in and 21st without. They have a strongly negative passer rating differential, which is the biggest thing holding them back. Detroit is also pretty far down the list due to very slight margins in passer rating and points. St. Louis is the only other team to make a similar climb in team strength to the Seahawks over the last three weeks. 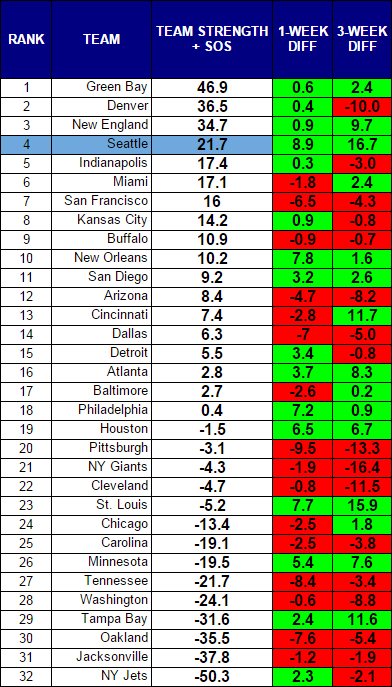