Marcell Dareus has been talking about the Bills objective to be the best defense ever. He and his teammates will need to start with being the best defense in the league, something they failed to accomplish last season. Take a look at the five most ferocious defenses of 2014, and what made them so tough.

It would be easy to cherry-pick stats for any of these defenses and make them seem better than the others. The goal here was a more honest calculation. The fundamental perspective driving these rankings and the underlying formula was that a team needed to do something special relative to the rest of the league. Being the best run defense in football, but having six other teams perform relatively equivalent run defense is less impressive than being the best by a wide margin.
I used standard deviation from the league average in a number of key stats in order to determine not only whether the team was best in the league in that category, but just how outstanding they were. All stats were treated equally except for points allowed which was triple-weighted because that really is the most important number of them all.
The formula took into account statistics ranging from points to passing and rushing yards to first downs to takeaways and more. In each case, the defense was measured in standard deviations from the league average and then combined into overall index. More sacks and takeaways is a good thing for a defense, whereas more yards or points are a bad thing. This was accounted for. The index was calculated in a way that means the more negative the number, the better the defense.

Summary:
The 49ers kickoff the countdown at number five overall. One of the most dominating defenses of the past several years overcame a series of injuries to post a very respectable -7.47 overall score. Turnovers played a key role in their position as they finished fourth in the NFL with 29 takeaways, which was just over one standard deviation above the league average. But if you peel back another layer of the onion, it was really stellar pass defense that defined this team as their best score was -1.23 standard deviations below league average in opponent completion percentage, and nearly a full deviation below the norm in passer rating. 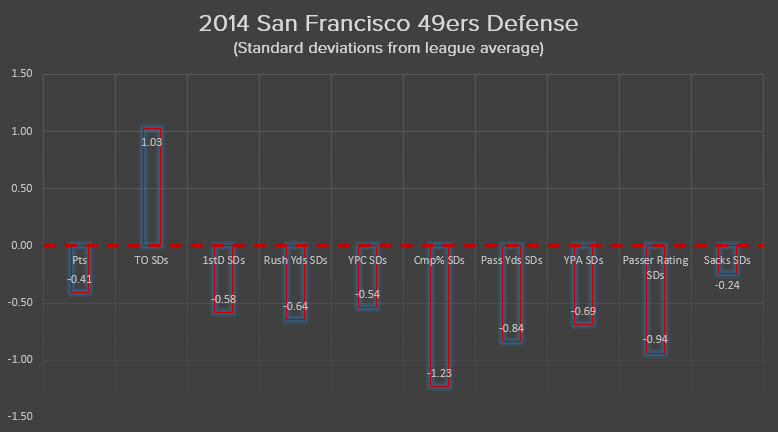 Outlook:
Perish Cox and Chris Culliver were among the members of the 49ers defense that either left via free agency or retired.
View image | gettyimages.com
A once proud defense will struggle to stay among the top five in the coming season, relying on a number of young players to step into starring roles.

Summary:
JJ Watt and the Texans eke past the 49ers due to their league-leading performance in turnovers, strong results in points allowed and overall pass defense. They were a very impressive 2.0 standard deviations above league average in takeaways, but were only able to be a full standard deviation better than the norm in two other categories (points allowed and completion percentage). 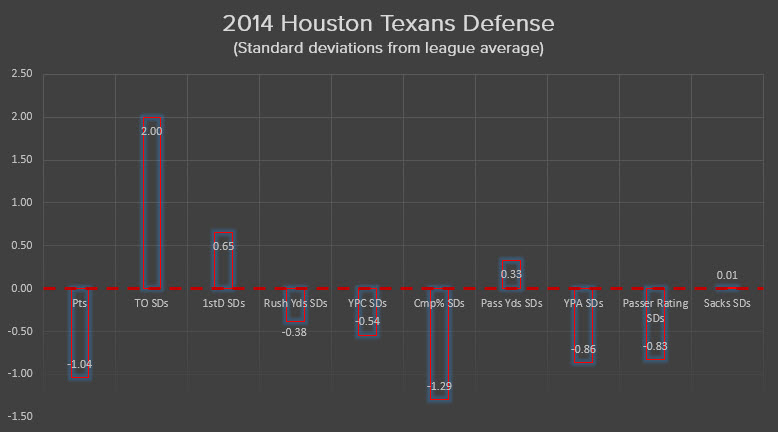 Outlook:
Any time you have the best defensive player in the sport suiting up on your side, the outlook is positive.
View image | gettyimages.com
The health of players like Brian Cushing and Jadeveon Clowney is paramount. This defense has the potential to be even more dominating if the right guys can just stay on the field.

Summary:
The top three defenses separate themselves a bit as the Lions come in nearly three full points ahead of the Texans. Unlike the first two teams on this countdown, the Lions excelled in run defense far more than pass defense. In fact, their score of -2.70 standard deviations below the league average in opponent yards per carry would probably be significant beyond this season. In other words, this was a historically good run defense. This helped them to a very solid -1.52 score in points allowed, but they were below the league average in sacks, first downs allowed, and completion percentage. 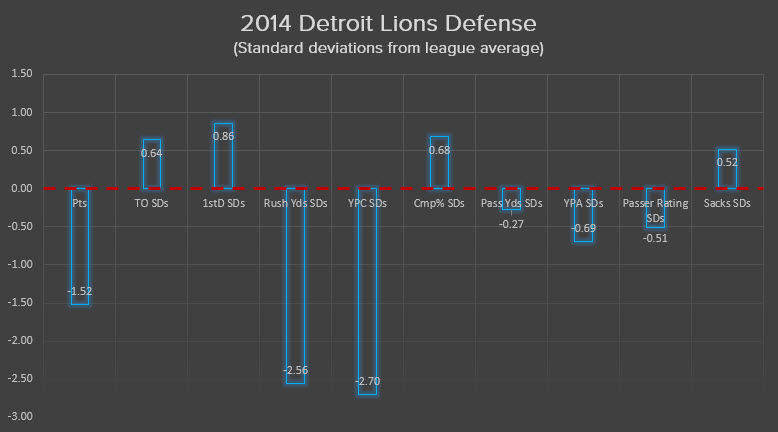 Outlook:
Gone are Ndamukong Suh and Nick Fairley. Bringing in aging veterans to replace them cannot give Lions fans much confidence that this team can put up similar numbers
View image | gettyimages.com
Haloti Ngata was a dominating presence for years in Baltimore, but he will have a very tough time even treading water with where the Lions defense played last season, let alone improving.

Summary:
The gap between the Lions (#3) and the Texans (#4) is dwarfed by the gap between the Lions and the Bills. These top two defenses stood head and shoulders above the rest of the league. Buffalo’s dominating defensive line led the sacks and were more than 2.0 standard deviations above the league average. That helped drive strong performances in passer rating (best in the NFL), yards per attempt, passing yards and first downs allowed.

Their achilles heel, and likely what kept them from the top overall spot were struggles to stop the run and a good-but-not-great total in points allowed (the most important factor). The Bills were barely above league average in run defense. Before Dareus and his friends can make true on their goal to be the best defense of all time, they will have to show the commitment and ability to grind away on run plays instead of just get after the quarterback. 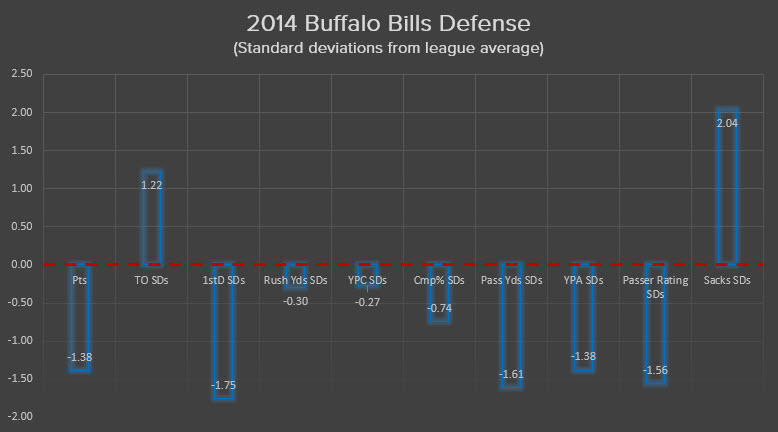 Outlook:
Rex Ryan brings a passionate and proven formula to great defense along with him to Buffalo. His teams have historically been very strong against the run, an area the Bills clearly need to improve in.
View image | gettyimages.com
There may be only one team in the NFL with the talent and coaching necessary to challenge a historically great defense that resides on the opposite coast. Marginal improvement will likely not be enough to overtake the top spot.

Summary:
Buoyed by a historic finish to the 2014 season, the Seahawks once again were the best defense in football, and it was not that close. Seattle used a near-perfect final six games, where they allowed a ridiculous 6.5 ppg to finish #1 overall in points allowed for the third straight season. Only one other defense in history, the 1969-1971 Minnesota Vikings, has accomplished that feat.

No defense since the 1976 Steelers have allowed fewer points in their final six games than the Seahawks did last year.

This is not just a good defense. This is a soul-crushing fraternity of terror. Their dominance is almost best explained by pointing out their flaws. Seattle managed to dominate the league in opponent points and yards despite a meager league average performance in takeaways and sacks. Seattle was the only team to post standard deviations over 2.0 in three categories. The Lions were the only other team to have at least two.

They were outstanding both against the pass and against the run, leaving offenses few options for how to score points. Injuries played a significant role in some less-than-stellar performances in the middle of the year that actually lowered their overall numbers. 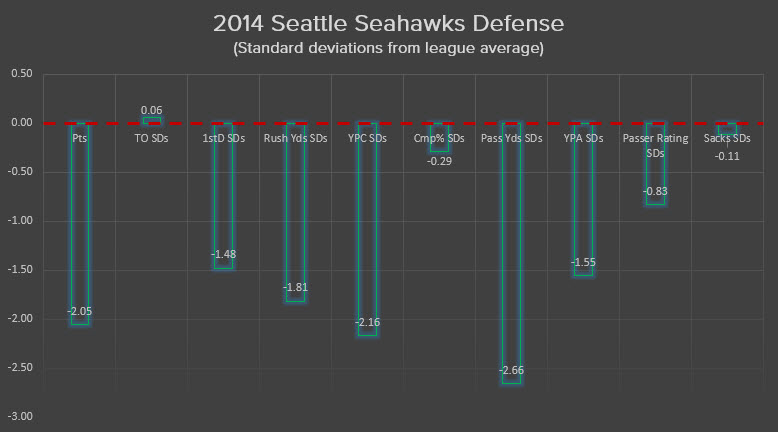 Outlook:
Seattle returns almost everyone to their defense. A case can easily be made that this year will be better than last due to reinforcements like a healthy Brandon Mebane, a refreshed Ahtyba Rubin, and promising young players like Cassius Marsh, Frank Clark, and Kevin Pierre-Louis.
View image | gettyimages.com
New defensive coordinator Kris Richard will need to prove he can steer this battleship as adeptly as Dan Quinn and Gus Bradley did before him. Health will play a major role as it always does, but there is little other reason to expect the Seahawks to relinquish the throne anytime soon.

The best and the rest 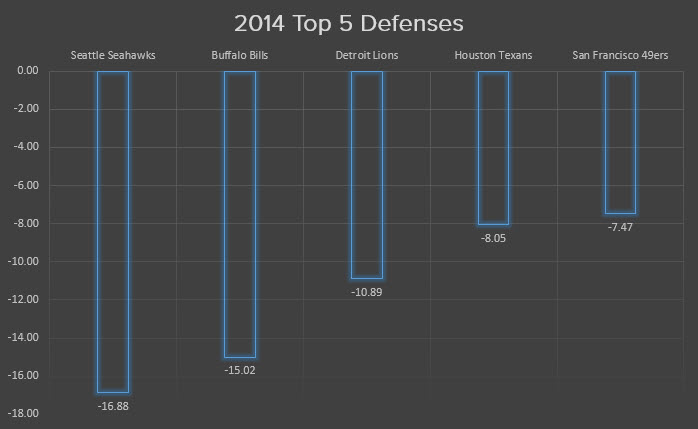