Inside The Numbers: Scouting the Lions

The Seahawks are healthy favorites to win their second game of the season against the winless Detroit Lions. Seattle has yet to play a game that meets their standards, and the Lions have talent that belies their meager statistics. Look beyond the surface of this Lion’s team and you might be surprised what you find.

It was just a few seasons ago (2011) that Matthew Stafford threw for over 5,000 yards and 41 touchdowns. He followed that up with another season just under 5,000 yards (4,967). His yardage totals have trailed off every year since to where he threw for 4,257 yards last season, but had his highest passer rating (85.7) since that breakout 2011 season.
Stafford has never been a particularly accurate passer. His completion percentage has only eclipsed 60% twice in his career. Only Cam Newton and Andrew Luck have completed a lower percentage of their passes since 2012 than Stafford (min 1000 attempts). His unorthodox throwing style can lead to off-target throws, which combines with his gunslinger mentality to create turnovers. He has thrown more interceptions (53) than any quarterback outside of Eli Manning and Andy Dalton since 2012.
His offensive coordinator, Joe Lombardi, has come under fire in Detroit for the terrible start for the Lions offense. One of the most curious occurrences so far has been how Lombardi’s offense has impacted Stafford. He is throwing the ball more than ever before (42+ att/gm), throwing the ball faster and for a higher completion rate, but is under pressure more than he ever has been. 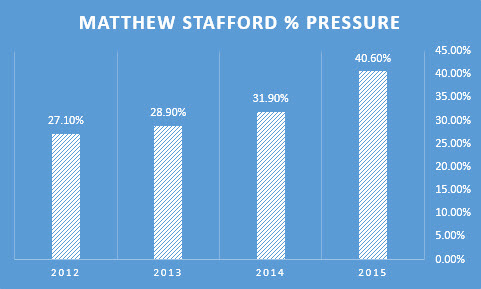 Even though Stafford is throwing the ball more quickly (70% of his dropbacks are 2.5s or less, compared to 55% last year), and being pressure more often, he is being sacked less than last year. Meanwhile, he continues to throw a bunch of interceptions. Only Luck has thrown more (7) than Stafford (5) so far this year. That paints the picture of a player who is making reckless decisions, with poor pass protection a contributing factor.
What is also different about Stafford this year is where he is targeting players. There has been a drastic drop off in his deep throws so far.
So he is throwing more than ever, throwing quick and short, getting pressured more, and tossing a bunch of picks. That is a very odd mix.

Seahawks fans, meet a team with an offensive line that is arguably struggling more than yours. The two tackles, Cornelius Lucas and Riley Reiff, are ranked #44 and #54 among offensive tackles in pass blocking efficiency, per PFF. Their center, Travis Swanson, ranks 28th out of 32 centers in overall PFF rankings.
The Lions rank last in the NFL with a paltry 46 yards rushing per game, and that is not just because they are so pass-centric. They also are tied for last in the NFL in yards per rush at 2.6 YPC.
Those sad stats have not been compiled against the best run defenses the NFL has to offer. San Diego ranks 30th in the NFL in opponent rushing yards per carry (4.9), while Minnesota checks in at 25th. Denver (6th) most closely matches Seattle (10th) in rush defense. Detroit only managed 28 yards and a 1.5 YPC against the Broncos.
Their quarterback has been hit a lot as well. After a decent first game against San Diego where they yielded just one sack and three QB hits, the Lions have given up 18 QB hits in the past two games. The Chargers rank 31st in the NFL in sack percentage, while the Vikings rank 17th and the Broncos rank 4th. Denver got to Stafford for four sacks and 10 hits in Detroit. Seattle enters the game 7th in the NFL in that category, and will be playing at home.
This may be a great game for the Frank Clark coming out party.

Levy in, Ansah out

It is looking like the Lions will get back perhaps their best defensive player in Deandre Levy for this game. He has yet to play so far this season, but practiced for the first time this week, and is expected to play. Unfortunately, for Detroit, it looks like they will lose starting defensive end Ezekiel Ansah.
Ansah has been among the better run defenders for the Lions and has two of the team’s four sacks on the year. Detroit is 24th in the NFL in sack percentage with Ansah in the lineup. They will need to find pass pressure elsewhere without him.
Golden Tate has received most of the homecoming attention this week, but former Seahawks Jason Jones and Darryl Tapp figure to play important roles for the Lions defense.
The primary concern for the Seahawks has to be Haloti Ngata. Drew Nowak struggled with B.J. Raji in Green Bay. Ngata, despite being on the downside of his career, will be a significant challenge for the interior of the Seahawks line.

The Seahawks bring the #1 ranked special teams into this game, according to FootballOutsiders.com. Detroit is 15th.
The Lions have struggled some on punt coverage and punt distance. They rank 20th in net punt yards. Their kickoff coverage has not been great either, allowing 28.7 yards per return, 26th in the NFL, but they have only had three kicks returned so far. If Tyler Lockett gets a chance, he should have room to run against this group.

Misfiring on all fronts

This Lions team has some flashy talent in Calvin Johnson, Golden Tate, Matthew Stafford, Haloti Ngata and Deandre Levy. Their numbers should be better than they are. Still, even with a poor pass offense, running game, special teams and pass defense, they have been in every game so far.
They led San Diego 21-10 in the first half of the season opener on the road. They trailed Minnesota 17-10 at halftime, and the score was 17-12 late in the fourth quarter against the Broncos. Turnovers that turned into points were a key factor in every game. If Stafford cannot control his tendency to throw the ball to the wrong team, the Lions will not win this game in Seattle.
If the Lions can eliminate turnovers, they have a shot. Their run defense is decent, and should improve with Levy back. Seattle has had plenty of challenges controlling the line of scrimmage on offense either to run or pass protect. Ngata is the type of player who could wreak havoc.

A Seattle team that wins the turnover battle against the Lions should be in great shape to win the game. It does not feel like the Seahawks are quite ready for a clean victory, and a team like Detroit has plenty of talent and incentive to make this a dogfight. A blowout would be a surprise. Seattle is the better team, though, in all three phases. Look for the Seahawks pass rush to be a deciding factor.