Opinion becomes accepted fact when enough people share the same perception. Todd Gurley has been a beast since he joined the Rams offense this season. Nobody is arguing otherwise. He has rushed for 775 yards, and generally brutalized opposing defenses. Some have even whispered that he may already be the best back in football. The reality is that he may not even be the best rookie running back in the NFL. Thomas Rawls has fewer starts, but has vastly outperformed Gurley in nearly never statistical measure.

Gurley got a late start to the season due to injury, but has now started for seven games. As expected, his season totals are higher than Rawls in most places on volume alone. 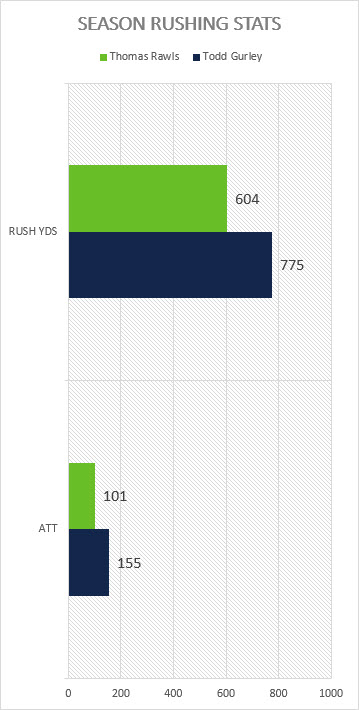 Gurley has nearly 200 yards more rushing with over 50 more carries than Rawls. What these numbers do not show is how each player is faring on a per carry basis.

Both players have not been utilized as much in the passing game thus far. Still, Gurley is lapping Rawls on season totals. 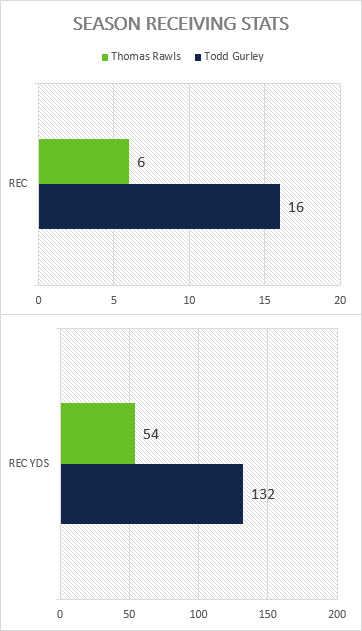 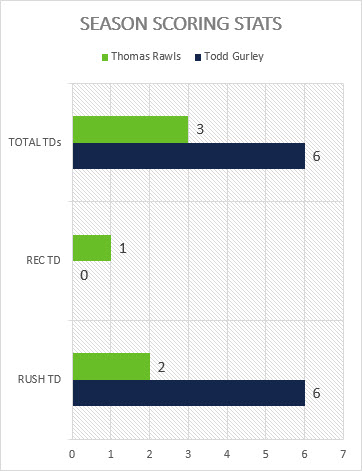 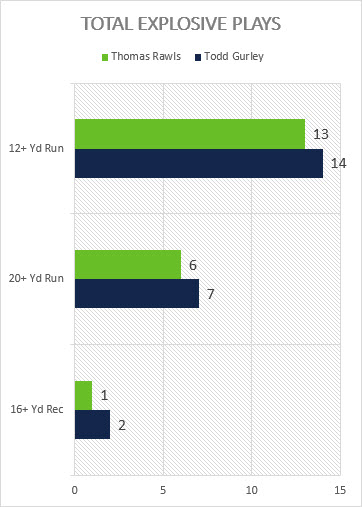 Different teams define explosive plays in different ways. The Seahawks coaching staff considers a 12+ yard run or a 16+ yard pass to be an explosive play. The above chart shows both of those totals for Gurley and Rawls, as well as the more widely circulated 20+ yard run. It is interesting to see Rawls nearly even with Gurley in this statistic despite significantly fewer attempts.

Gurley has seven starts under his belt, almost half a season. Rawls has four starts. Looking at season totals does little to help us understand how these two great backs have performed in relative terms. A per start breakdown should be a better way to compare the two. 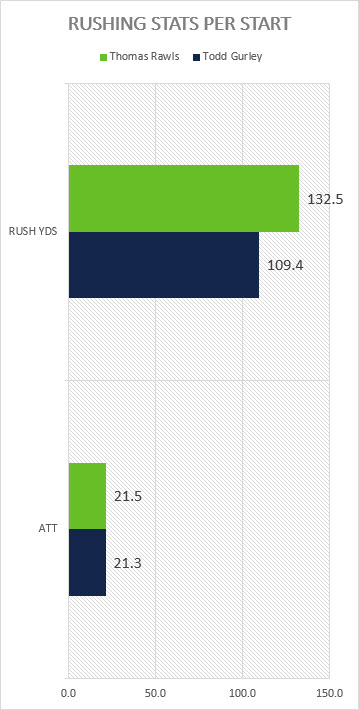 Almost identical rushing attempts is producing over 20 yards more per game for Rawls. His sparkling 6.0 YPC number on the season rises to 6.2 YPC in his four starts. Gurley’s YPC rises from 5.0 to 5.1 when removing his one non-starting game. 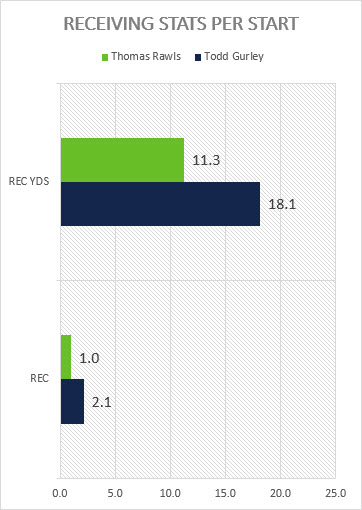 Neither player is making a major impact as a receiver thus far, but Gurley the stronger of the two thus far.
View image | gettyimages.com 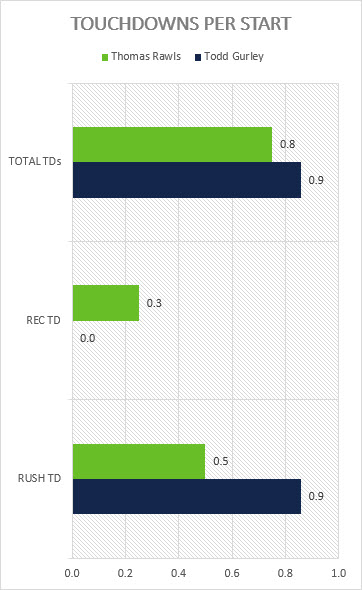 Gurley has doubled Rawls in total touchdowns so far this year, but the two are essentially even when looking at their per start numbers. 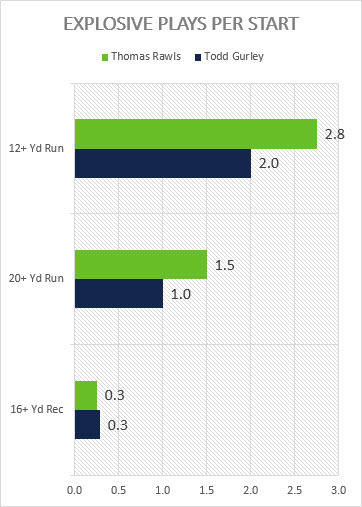 Rawls has been the far more explosive player in his starts. To give you some idea of how special Rawls has been in this area, consider that Marshawn Lynch averaged 1.5 explosive rushing plays per start last year, and has never averaged more than 1.7 with the Seahawks. He has an explosive rushing play on 12.9% of his attempts overall. Gurley checks in at 9.0%, which is a terrific number as well. Both of these players are making big plays. Rawls is just making them more often.

ProFootballFocus.com (PFF) tracks yards after contact. Rawls is tied for 2nd best among all running backs with 3.3 YaC. Gurley is doing well with 2.7 YaC, which ranks 14th. Lynch led the league last year at 3.0 YaC, after registering 2.5 YaC in 2013, and 2.8 YaC in 2012. In other words, Rawls is running through tackles at an elite pace.

The big fellas blocking always have to be factored into any running back evaluation. Neither Gurley nor Rawls have a great line in front of them. There are not a lot of great measure of offensive line quality for run blocking, but here is at least one to consider.
PFF has rankings for all 32 teams in run blocking. The Rams line ranks 25th. The Seahawks line ranks 30th.
The Seahawks offensive line has generally been regarded as one of the worst in the NFL this season. The fact that Rawls has been so effective behind this line only strengthens his case.

These are are two fantastic young running backs who happen to both reside in the NFC West. Any team would be happy to have either one. The goal in comparing the two is not to imply that one is bad and the other is good. Instead, these numbers should cause everyone who has anointed Burley the best running back in football to stop and consider how he stacks up with Rawls.
Rawls has produced more rushing yards per start and per carry. He is essentially even in scoring, and has produced explosive plays at a higher rate while producing far fewer negative plays per rush. He has faced a similar level of competition behind what appears to be an inferior offensive line.
Critics will rightly point to the smaller sample size (4 starts vs Gurley’s 7 starts). The injury to Lynch means that question should be answered soon enough. Rawls gets his next start against the 5th ranked run defense in the NFL. He will then travel to face a tough Vikings defense. Gurley started with four 100 yards rushing games in his first four starts, but has not had one in his last three. Rawls has the chance to eliminate any doubt about which back is having a better rookie season in the weeks ahead.