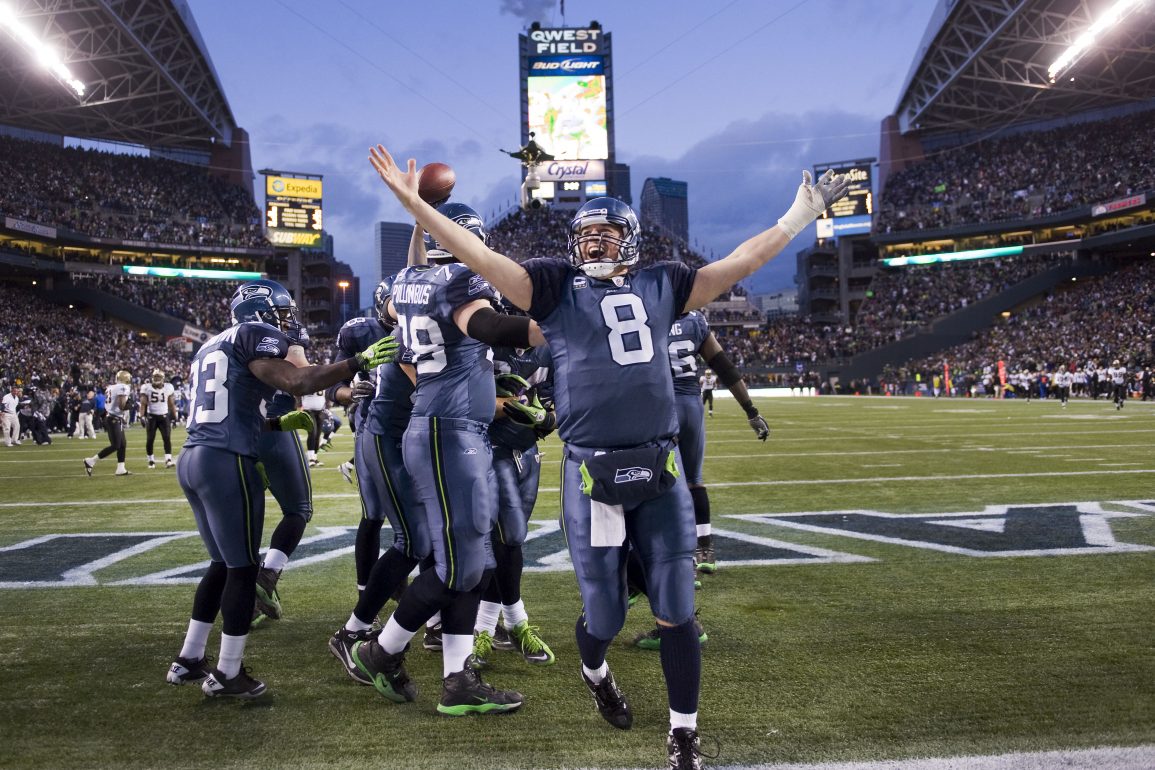 One of the greatest players in franchise history, and one of the best leaders to ever step into a Seattle locker room, is looking for a place to call home. The Indianapolis Colts announced they are moving on from 40-year-old backup quarterback Matthew Hasselbeck. It just so happens the Seahawks have a spare bedroom, and a need for exactly what Hasselbeck brings to the table. Once sent packing by John Schneider in a move that made his own son angry, the opportunity to improve the team and do right by a franchise great is knocking. Let him in, John. It is time to bring Matt home.

Tarvaris Jackson was a respected starter when he replaced Hasselbeck in 2011 and played through serious injury. He lost his starting job to then-rookie Russell Wilson the following year and was traded to Buffalo before eventually re-signing as a backup the past two years.

Jackson was a good backup in the sense that the team had confidence that they could win games if he needed to step in. He was relatively affordable as well. One thing that has never been clear is how much knowledge Jackson had to pass along to Wilson, or how much he actually did pass along.

Hasselbeck signed with the Colts specifically because he wanted to help nurture the young career of Andrew Luck. He relished the opportunity to pass along the knowledge he had acquired through what had been 14 years in the league at that point.

As he had done in his previous stops in Seattle and Tennessee, he made a momentous impact in the locker room. Even the punter noticed.

Thanks @Hasselbeck for being the perfect example of how to be an @NFL pro. pic.twitter.com/BnOsBKxLGi

Hasselbeck has always been the perfect combination of smart, self-deprecating, and courageous. His work ethic is unquestioned, and his knowledge of how to play the quarterback position is among the best in the league.

Seattle has a player who could become the best quarterback to ever put on a uniform. Think that’s hyperbole? Check the numbers. Check the accomplishments Compare them to anyone you want through four seasons.

The areas where Russell Wilson has the most room to improve (reading defenses, pre-snap adjustments, making adjustments, and being a respected locker room presence) just so happen to be Hasselbeck’s strengths.

While Jackson has made it clear that he wants to test free agency in hopes of finding a place he may get a chance to play, Hasselbeck is looking for a place where he can leave a legacy through what he passes down to the next generation of signal callers.

He also won five of the eight games he started for the Colts last year when Luck was injured. He is a viable backup.

Seattle has chosen to leave Wilson’s development to quarterbacks coach Carl Smith to this point. He eagerly soaked up knowledge from players like Drew Brees at the Pro Bowl when he has had the chance. Putting a player in his position group who is available every moment to answer questions and break down film could be exactly what Wilson needs at this point in his career.

Unlike Jackson, Hasselbeck was a long-time starter in this league. He was developed by one of the best quarterback coaches of all-time in Mike Holmgren. A 6th round draft pick by the Green Bay Packers in 1998, Hasselbeck had to fight for everything he achieved in the NFL.

Even after Holmgren traded for him in in 2001, Hasselbeck battled with Trent Dilfer and Brock Huard for the starting role. He got a chance to start that year, but lost it to Dilfer due to poor play and a battle of wills with Holmgren about how to run the offense.

His redemption came when Dilfer was injured the following year and Hasselbeck took over with a renewed willingness to play the position Holmgren demanded. Like Marshawn Lynch, when he finally relented and played the way Tom Cable asked, remarkable production followed.

Over his final six games of the 2002 season, Hasselbeck threw for over 300 yards in four of them, and 298 yards in a fifth. The offense scored over 30 points in four of those six games after doing so only three times in the previous 22 contests. Hasselbeck had found something, and helped the team to a 10 win season for the first time in 17 years in 2003.

He threw for a then-franchise record 3841 yards and 26 touchdowns that year and made the first of his three Pro Bowl appearances. His best season, though, came in 2005 when he led the NFC in passer rating at 98.2 (another franchise record), and led the team to its first Super Bowl.

Running back Shaun Alexander won the MVP award that year, but ask any fan who watched that team or any player or coach inside that locker room, and they will tell you that Hasselbeck was the MVP. He ran the offense to perfection, and was the unquestioned leader on and off the field.

He had a more flashy statistical year in 2007 when he nearly became the first Seahawks quarterback to throw for 4000 yards (3966), but the 2005 season was his capstone.

His final season in Seattle was 2010. A team that had no business making the playoffs somehow found themselves facing the defending Super Bowl champions. Everyone remembers Beast Quake, but that run would not have mattered had Hasselbeck not played his best postseason game with 272 yards and 4 touchdowns, to go along with a 113.0 passer rating.

It was fitting that Hasselbeck’s final home game saw him running alongside Lynch on that historic run, trying, and mostly failing, to block 50 yards downfield. That is who Matt Hasselbeck is.

I brought up the possibility of bringing Hasselbeck back to Seattle in my offseason analysis series. It surprised me how many people balked at the idea. I can only assume those people became fans after the 2005 season, and never saw him play at his peak.

By any measure, Hasselbeck is one of the best players to ever play for the Seahawks. He holds the franchise records for passing yards, is second in touchdowns, game-winning drives, and wins as a starter.

As good as he was behind center, it was the way he carried himself and treated people that always stood out to me. No one was classier or funnier. He was the perfect kind of cocky.

Many saw his declaration of “We’ll take the ball and we’re gonna score,” in the playoffs against the Packers as an embarrassment. For a lifelong Seahawks fan, it was a groundbreaking moment of machismo from a franchise and fanbase that never had the courage to lean forward.

I listened to every interview and press conference of his while he played in Seattle. He was more than respectful. He was present and engaged in real conversation. He was genuine. These qualities made him a fantastic leader, and a terrific member of the community.

Any fan against the idea of bringing him back to this city and this team should think long and hard about what they want to see from their players. Nobody is asking him to lead this team to the Super Bowl, but I can’t imagine a better way to finish his career than by placing a championship ring on his finger.

Football is a game of skill and power and fury, but it is also about savvy, courage, and leadership. The game it at its best when those qualities of character fuse with the physical gifts of youth to turn boys into men. Seattle has a chance to bring a man into their locker room who makes the people around him better without ever playing a snap. Bring Matt home.