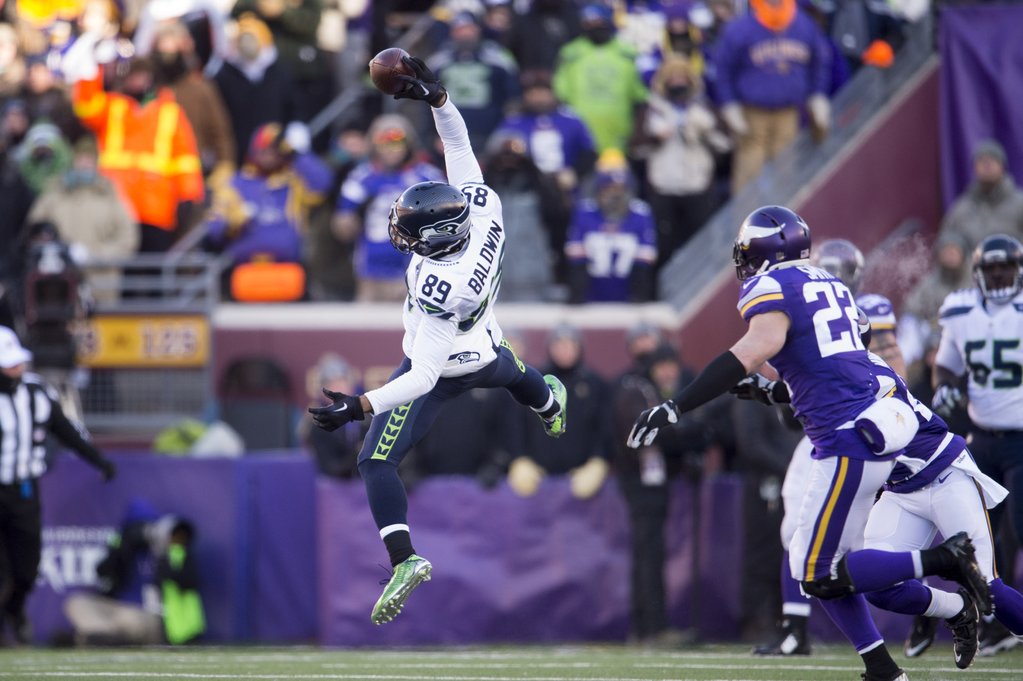 6 Things You Should Know About Doug Baldwin

Seattle signed leading wide receiver Doug Baldwin to a four-year contract extension reportedly worth $46M ($24M guaranteed) yesterday. He becomes the seventh-highest paid receiver in the game, behind names like T.Y. Hilton and Dez Bryant, but ahead of players like Larry Fitzgerald and Keenan Allen. It has to be surreal for the undrafted player who had been relegated to the scout team by his college coach Jim Harbaugh at Stanford. If money is respect in the NFL, the often-doubted Baldwin will have trouble playing the disrespect card any longer. Many NFL fans will be getting to know Baldwin for the first time given his new stature. Here are a few things worth knowing about the latest Seahawks rising star.

1. This is not about the Seahawks becoming a passing team

Just about every article written about Baldwin’s extension incorrectly states his numbers jumped last season when the Seahawks “turned to the passing game.” Wrong. Sounds right. Totally wrong. Russell Wilson averaged 29.3 pass attempts per game in the first eight games of 2015. The Seahawks averaged 30.7 rush attempts during that time. Wilson averaged 31.8 pass attempts in his record-breaking second half of the season. Guess how many times they ran the ball? If you guessed 31.8 times, you would be right. There was the slightest of shifts toward a more equally balanced attack, but to say this became a passing team would be inaccurate. Signing Wilson to big extension last year and now signing a receiver to a big contract this year will be simplistically assumed to be a sign that Seattle is morphing into an Aaron Rodgers, Tom Brady, Drew Brees-style volume passing offense. Not gonna happen. So why would you pay a receiver so much money?

2. Baldwin is the NFL’s most efficient wide receiver

Baldwin did not get this contract because the team expects him to start getting 190 targets. He got this contract because he does not need 190 targets to have a major impact on the game. Seattle’s offense will continue to be balanced, which in today’s NFL translates to run-first when compared to volume passing attacks. That means there will be limited targets to spread across the Seahawks receiving corps. No receiver has been better at squeezing the most out of every target than Baldwin over the past three seasons.

Take a look at this list. It is comprised of the only wide receivers who finished in the top 100 in the NFL in receptions for the past three seasons. Only 24 receivers accomplished the feat. Antonio Brown has piled up an astonishing 375 receptions in that span and over 5,000 yards. Brown and Demaryius Thomas totalled 31 touchdowns to lead all receivers. You know those names. But look closer. 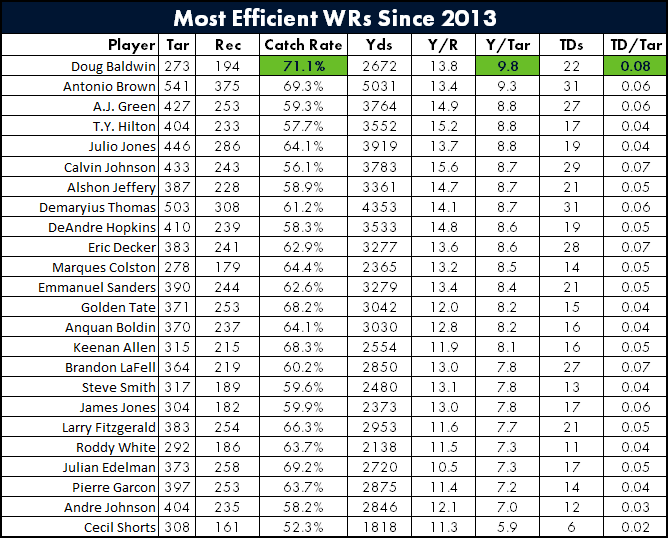 Baldwin led all these receivers in efficiency. He had the highest catch rate, the best yards per target total, and best TDs per target. He cannot throw himself the ball. He cannot call a pass play. What he can control is making the most of every chance he gets. Nobody has been better in that regard.

Baldwin’s projected three-year totals would be 385 receptions, 5,302 yards, and 43 TDs if he had received the same 541 targets that Brown did

3. He has never made the Pro Bowl

It is time for that streak to end.

Topping the charts for efficiency is all well and good, but the question will always be asked whether the player can maintain their efficiency with greater utilization. If they are the top dog, will defenses adjust and take them away? Baldwin was targeted an average of 5 times per game in the first eight games of last season. His targets rose to 8 per game in the second half of the season. What did he do with those three extra targets per game?

Baldwin mostly became more efficient with greater utilization. That is not usually how these things work. Yes, his catch rate dipped slightly but he still ranked fourth in the NFL over that stretch in that statistic for receivers getting at least 35 targets. The receivers above him were: Golden Tate (83.3%), Jermaine Kearse (75.7%), and Tyler Lockett (75.6%). The Seahawks clearly covet efficient wide receivers.

Meanwhile, Baldwin was upping his yards per target and touchdowns per target considerably. Some incorrectly point to Jimmy Graham’s injury as the genesis of Baldwin’s rise. It actually came two game prior when he got 10 targets against Arizona and turned those into 7 receptions, 134 yards and a touchdown. Graham played in half the game against the Steelers and Baldwin totalled 8 targets, 6 receptions, 145 yards and 3 touchdowns.

That’s not to say Graham’s injury played no role in Baldwin’s rise, but the role it played was misunderstood. It was specific situations where Seattle started targeting Baldwin more, where Graham might have been the primary option. The red zone was one of those situations. The diminutive Baldwin never had been given much of a chance to make an impact close to the goal line. His chemistry with Wilson over the second half of the season was a revelation. It opened everyone’s eyes, including the Seahawks, and maybe even Baldwin’s, to what kind of impact player he could become.

Consider that if he were to sustain his second half pace for a full season, we would be talking about a player with nearly 100 receptions, over 1,400 yards, and 24 touchdowns. Even if he dips to 75% of that, you are talking about one of the most productive receivers in the game in an offense that passes less than just about any other team.

5. It’s about more than receiving

When is the last time you saw Julio Jones or Dez Bryant taking special teams reps? How often do you see T.Y. Hilton pancaking a defensive back on a running play? Baldwin does more than just catch passes. He is a key special teams contributor and a menacing blocker in the run game.

Most receivers who have a role on special teams are involved as returners or possibly gunners for punt coverage. Baldwin has been a dangerous return man when used (he is one of only 6 players to ever record more than 100 kick return yards and 100 receiving yards in a playoff game), but the team is set there with Lockett. Instead, he relishes the opportunity to mix it up with the big boys blocking on punt and kick returns. He also contributes on coverage.

Tom Cable has called out Baldwin and his fellow receivers as terrific blockers in the Seahawks ground-and-pound run game. Nobody gets paid big bucks at the receiver position for being a solid special teams contributor and a standout blocker. That means very few players are willing to put in the time to refine that part of their game. Fitzgerald is one of the few true professionals in that regard. Baldwin is in the same category.

6. He is a better person than player

It is unfortunate that many of the people who have heard of Baldwin outside of Seattle have probably just seen him during a tirade or an inappropriate touchdown celebration. That is not who Doug Baldwin is. For whatever reason, he decided to promote a different image of himself through the press. It was a fictional character who was inconsistent with his values. He knows that now.

Baldwin is a person who has always been underestimated and underappreciated. That was not going to be any easier coming into the NFL as an undrafted free agent and playing for a coach who prefers to run the ball. It was understandable that he wanted to grab some attention using the Richard Sherman controversy PR playbook.

He has come into his own as a man in the past few years. The difference between Baldwin in front of the media and Baldwin in front of friends has faded considerably. He still keeps his charity work out of the public eye, once telling me, “My mom always taught me that getting attention for charitable work lessens your contribution.” People would be astounded by the amount of time he dedicates to helping others. That goes beyond charity. He engages with fans on a personal level. He gives media members of all levels his time.

Seattle is now his home. He recently got engaged to a Seattle woman, and has been upfront about his desire to settle down in this area. It is people like Baldwin who are the bedrock of any great team. Quality person. Ascending player. Tireless worker. Those who know little will think he got too much money. Those who know Baldwin realize the Seahawks have invested wisely.