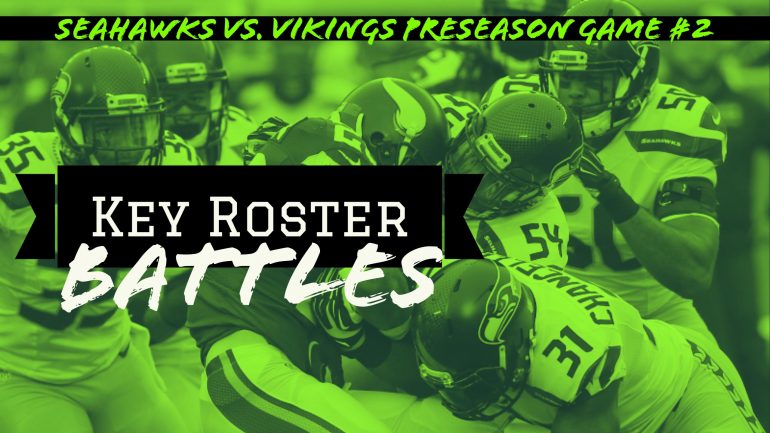 CenturyLink Field will bask in summer glory tonight when the Seahawks welcome in the Minnesota Vikings for a preseason game that will played in temperature roughly 80 degrees warmer than when these teams last met. The result will matter little. The player performances will matter a lot. Teams will make their cuts to 75 players in less than two weeks (August 30th). The third preseason game is when the starters usually play into the 3rd quarter, meaning that tonight’s game is really the best chance for players battling at the back of the roster to make their case. What many people do not realize is that some of the fiercest competition for roster spots can be between two players at different positions. The Seahawks have a couple of doozies, along with the more standard positional skirmishes.

A typical Seahawks roster will feature six cornerbacks and four safeties. They broke camp with five and five last year, partially due to Kam Chancellor’s holdout. I have been projecting the more standard six CB and four S split so far, but it’s far from clear cut. Think about it this way: who are the ten best players in the secondary, now and for the future? Figure that Earl Thomas, Chancellor, Kelcie McCray, Richard Sherman, Jeremy Lane, DeShawn Shead and Tharold Simon are locks. That is seven of the ten spots already spoken for.

That means a group of S Brandon Browner, S Steven Terrell, S/CB Tyvis Powell, CB Marcus Burley and CB Tye Smith are all battling for those last three spots. You could easily make the case that the three safeties are the most talented and valuable players. It also seems highly unlikely that the team will keep six safeties, especially if you consider that Shead can also swing over to safety.

Powell’s ability to play corner looms large here. The team is trying him out at that spot. If he shows promise there, that plus his outstanding special teams skills, youth, and low price, make him close to a lock for one of the three spots.

The team speaks confidently about the role they have in mind for him. He has still not proven himself at safety from what Pete Carroll has said. His age makes him vulnerable. His special team contributions help. A good game tonight could seal the deal.

Burley is an underappreciated role player on the team. He does his job, and can play inside or outside at corner. His special teams play has always been terrific. The only issue with Burley is his ceiling. The team is unlikely to get more from him than they already have seen. He may be on the outside looking in if the team wants to make a bet on future potential with a guy like Powell and/or Smith.

This is the battle I see that nobody is talking about. Smith is the one fans are most familiar with even if he has never really played. The second-year corner has been expected to step forward like so many Seahawks corners before him. Honestly, I have not seen it yet in camp. He’s definitely better, but there has been little indication of enticing upside. Also, Smith has failed to make a name for himself on special teams. That’s going to play a large role in this decision.

Terrell is the guy nobody knows or appreciates. He’s one of the best special teams players on the roster, and is the only safety on the team fast enough to be a true backup to Thomas. McCray can play the position, but his sideline-to-sideline speed is so different than Thomas that the team would likely need to adjust coverages. Terrell is certainly not Thomas, but the coaching staff has said repeatedly during press conferences that he is unique with his speed and ability to backup Thomas.

Before Powell had his outstanding game last weekend, I had Terrell over him on the roster. That has flopped. My best guess is Smith beats out Terrell due to youth, contract control, and the impending free agency of Simon, but this is silent battle worth watching.

This one is more straightforward. Jimmy Graham will be on the roster unless they put him on short-term IR, which would be crazy considering they could have left him on PUP. They are almost certain to keep four tight ends, with Brandon Williams joining Nick Vannett and Luke Willson. They most likely will keep five running backs. That really leaves only five spots for receivers. Doug Baldwin, Tyler Lockett, Jermaine Kearse and Paul Richardson are locks. That leaves one spot.

Williams would have this position all but wrapped up if not for his injury that held him out for more than a week. He was getting a lot of special teams reps and playing well as a receiver. Special teams will be a key deciding factor for this spot. Williams’ play in those situations tonight will be more important than making catches.

McNeil is a special athlete, who is 6’3″ and can run well. This is a guy who naturally slides into special teams duties. He is not as polished as Williams as a receiver. Don’t sleep on him for the final receiver spot.

All but off the team due to injury (he won’t play tonight), Smith also was behind Williams and McNeil on special teams when he was healthy.

The 7th round pick from Cal has gotten more attention than he’s earned so far. He is way too skinny to be a special teams contributor, and his ability as a receiver is not so overwhelming that the team would keep him anyway. I think he is headed to the practice squad. His game play can help change that.

I’m in the odd position of having hyped McEvoy before camp started (as a safety), and now tamping down the hype of him as a receiver. It’s not that McEvoy is bad. There are past teams that I think he would make on potential alone. This is a pretty stacked position on a pretty stacked team. McEvoy is extremely unpolished as a receiver and has not been a standout on special teams. That said, he is farther ahead on special teams than guys like Lawler or Smith. If he can make a few plays on coverage or returns tonight, his stock would rise for sure.

Linebacker vs Fullback vs Running Back

The team has been trying to find a replacement for FB Brandon Cottom since he was lost for the season due to injury. They have tried Tani Tapou and Jonathan Amosa and seen middling results. The name to watch for now is Kyle Coleman. The team had been considering him at fullback before camp started, but wanted to get a look at him at linebacker. He has had a very strong camp at that position, showing he is an NFL athlete. My read is that the team wants to find an excuse to keep him around. He won’t make the roster as a linebacker. There just is not enough space. That really means there is a battle for the fifth running back spot on the roster between two fullbacks, a running back, and a linebacker (as a fullback).

This is someone who is very good on special teams and could serve as a backup linebacker as well. Should he show promise as a fullback, and I’m optimistic he will, Coleman would have a very strong case for finding his way onto the roster.

The 7th round pick from Clemson is a favorite of the front office and the coaching staff. He has missed time due to injury but should be back for tonight’s game. He is similar to C.J. Prosise in that he was a receiver who was converted to running back. I currently have him making the team as the fifth running back without a fullback being kept. For that to happen, one of the tight ends would need to prove they can take on the fullback role.

Amosa played a decent first game. It’s not clear to me that he can deliver the blocks necessary due to his size. The other two players listed are more talented athletes.

Tony McDaniel was welcomed back to the fold this week. He adds more intrigue to an already jumbled defensive line position group. The team is very likely to keep nine players here. Michael Bennett, Cliff Avril, Frank Clark, Jarran Reed, and Ahtyba Rubin are locks. I had Jordan Hill as a lock, but no longer. That leaves four spots up for grabs.

He is out injured and is in the final year of his deal. He has had trouble staying healthy. It would not shock me to see Hill as one of the surprise cuts depending on how others in this group play.

The veteran is incredibly well liked and respected in the locker room. That will not be the deciding factor, but it does play a role. If he shows he is in shape, the team knows very well what to expect from him. He is helped by Rubin’s ability to slide over to NT to backup Reed. McDaniel is too tall to play NT, and the team would want someone to be there should Reed get hurt.

The free agent from the Patriots has yet to go through a full practice. If Stanley Jean-Baptiste had not hurt his shoulder in the game, Siliga may have been the guy cut to make room for McDaniel. It’s a shame because the guy could really help if he could just get on the field. Stay of execution so far, but time has all but run out.

A guy I have talked about since May, Bryant is a freak athlete who has quickly moved up the depth chart both as an interior pass rusher and as a base DT behind Rubin. He had a disappointing game in Kansas City, at least in terms of pass rush. He could cement his spot with some flashes in pass rush tonight.

He got the start when Bennett sat out last weekend. Jefferson has not shown much flash, but the team seems to trust him. They traded up to get him, so it seems likely they will keep him around. He’s probably the closest to a lock of all these names.

The only edge rusher of the group, Robinson would help himself greatly with a strong showing tonight. The woes of Hill and Siliga could open the door for a roster spot.