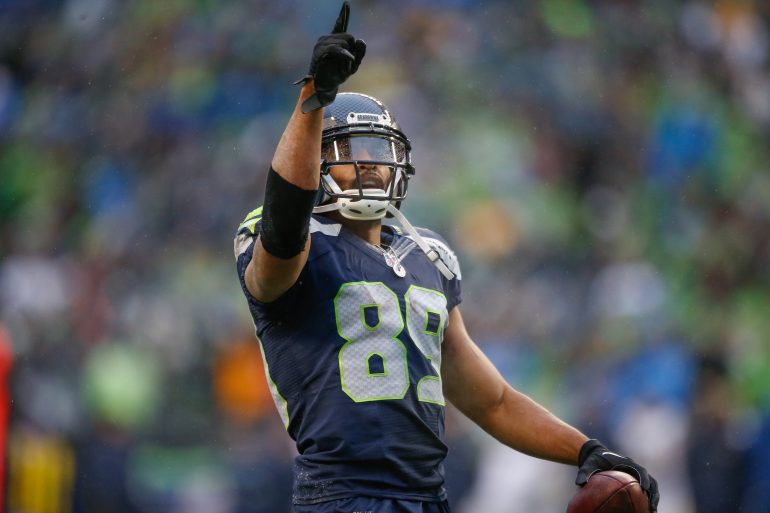 SEATTLE, WA - DECEMBER 27: Wide receiver Doug Baldwin #89 of the Seattle Seahawks reacts after scoring a touchdown in the third quarter against the St. Louis Rams at CenturyLink Field on December 27, 2015 in Seattle, Washington. The Rams defeated the Seahawks 23-17. (Photo by Otto Greule Jr/Getty Images)

Carolina ranked 16th after the first week last year and went on to win 15 games. Tennessee ranked first and the Rams ranked sixth. The eventual Super Bowl winners, Denver, were ranked eighth. Seattle, Minnesota and Washington all ranked 20th or worse and made the playoffs.

The Seahawks start this year at 13th, just above the midpoint. It might be surprising to see them above the Patriots, who won impressively in Arizona. That is largely due to a New England defense that struggled to slow down either the Cardinals pass efficiency (104.7) or run efficiency (4.8 YPC). It was not pretty, but the Seahawks had a positive pass, run and point differential. The Patriots were negative on the run differential.

Seattle is now headed off to play the team that had the worst statistical performance of week one in the LA Rams. We will find within the next few weeks if they really are as bad as they looked Monday night.

NOTE: I have decided to remove strength of schedule from the rankings until week two or three when there is a little more logic to SOS calculations.

As of September 23, 2014, I have added a strength of schedule component to the rankings as well.
Start typing to see results or hit ESC to close
softy russell wilson real hawk talk 49ers cardinals
See all results
More Stories