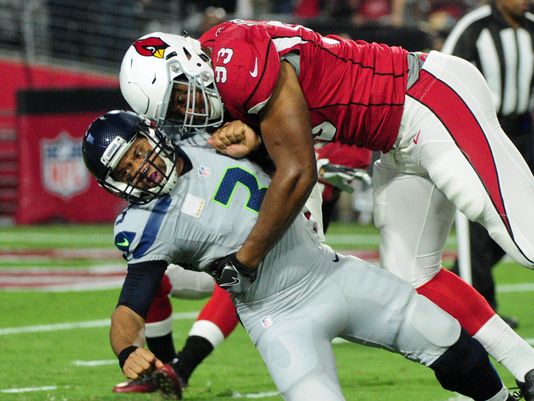 Exploring the cap implications of a trade at left tackle

Let’s cut through all the introductory etiquette and get right to the point: the Seattle Seahawks have an offensive line problem. More specifically, they have an offensive tackle problem. After what seemed like a historically awful offensive performance, the Hawks will undoubtedly be evaluating all of their options. On top of that, Bradley Sowell will be out several weeks with an MCL sprain. That leaves undrafted free agent Goerge Fant, a former college basketball player, to slide in at left tackle and protect one the franchise’s most coveted players. Well, this should be interesting.

Two names floating around as potential trade targets at left tackle are 49er Joe Staley and Joe Thomas from the Browns. Both, at a minimum, are legitimately good to great left tackles and would be immediate upgrades on the offensive line. I’m not going to argue whether they should or should not make this trade, but rather just assume that you want it to happen. Let’s break down the financials.

Step 1: How much do the Seahawks have in cap space?

Right now, according to my own spreadsheets, I have the Hawks with $7.8M in true cap space — give or take a million. Many financial aspects that determine cap space are publicly unavailable to us – so it’s important to give some wiggle room. I’m mainly referring to two things here: 1) LTBE (likely-to-be-earned) incentives in player contracts that are accounted for at the beginning of the year and 2) Injury settlements.

With the information available to us, the Seahawks likely have around $7.8M in true cap space (and that includes IR and all that fun stuff).

Step 2: How much would Joe Staley or Joe Thomas cost?

Staley is currently in year three of a six year contract worth $44,650,000. His contract runs through 2018 and actually dips in cap hits the last two years. So…let’s assume he’s traded to the Hawks. The signing bonus was already paid by the 49ers so Seattle is off the hook for that. For 2016, that leaves a $5,400,000 base salary and a $500,000 roster bonus (the workout bonus was already paid). That totals a $5.9M cap hit for 2016. However, the base salary and his roster bonus are paid on a divided weekly basis. And Joe has already played seven games.

Now remember, the Hawks have around $7.8M in 2016 cap space. Based off the over $2M difference in room and 2016 salary for Thomas, it is my understanding that the Seahawks could slide his contract under the 2016 cap without any alterations to any other contracts.

Step 3: Let’s review the conclusions we just came to

Both players could come into Seattle and they’re wouldn’t need to be any major shakeups to any other player contracts. In my opinion, it all comes down to their price. Would Cleveland part with Thomas for a 2nd round pick? If so, I hope John is on the phone right now. On the other hand, the 49ers are reportedly putting a first round price tag on Staley. That seems a bit steep. One thing I know for sure: this Seattle defense might be just as good as the 2013 unit. Let’s not waste the primes of these defensive stars.