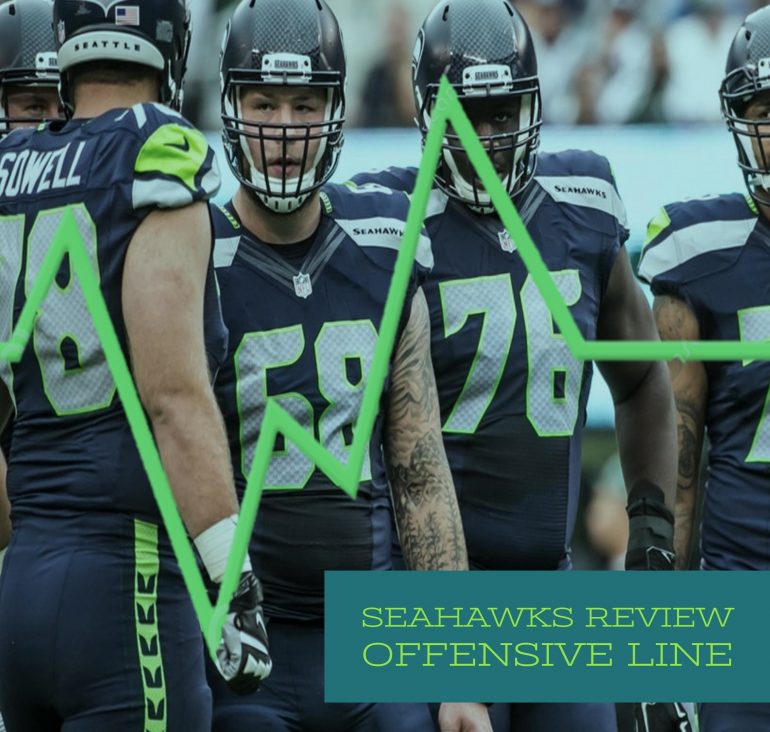 The Seattle Seahawks have play a quarter of their season already! That’s slightly terrifying, as we’re not so slowly creeping towards the long, cold NFL offseason. But, with a bye week, it’s also a good place to take a look back and review what we’ve seen so far. I’ve gone back and evaluated Seattle’s offensive line on a play by play basis, and broken down each player.

Quick run down on the charts you’ll see below. Let’s start with the obvious, ++ and — are very good or very bad plays. These are plays that stand out one way or the other. The + and – columns are broader categories. The + category covers plays that are above average to average. These are plays where the linemen did his job. They’re important, and sometimes they’re pretty good, but they’re not making it into a highlight reel. The – category is basically the opposite. These are below average plays, but not disastrous plays. They’re not good, but you’re probably not going to be laughing at a vine of them.

Alright, let’s get to it.

Sowell was one of the biggest training camp surprises this offseason. He hadn’t started a game since 2013 for Arizona, and he played poorly in those starts. Seattle brought him in on a 1 year, $1 million contract, ostensibly to be a backup swing tackle to both Garry Gilliam and Jamarcus Webb. But somewhere along the line in training camp Sowell worked his way up to starting at left tackle.

The news that Sowell would be starting at the highest profile position on the offensive line made many worry. Through four games though, he’s managed to avoid being a complete disaster. Sowell doesn’t do anything particularly well, and he struggles in both run and pass protection. Defending that pass, Sowell has struggled most with speed rushes. He’s attempted to compensate for this weakness by getting a very quick start, and it feels a bit lucky that he hasn’t been called for more false starts. On run plays he’s had trouble sealing the edge on outside runs and doesn’t show much strength in general.

These weaknesses shouldn’t be over-exaggerated though. Sowell has been, more or less, just a guy. If this was baseball, he’d be a 0 WAR player. He’s had his fair share of serious blunders, and as a left tackle those tend to really stand out. But there have also been long stretches of perfectly acceptable play.  I think Seattle will be happy if they continue to get this level of stop gap performance, allowing them to develop Fant this season and/or address the position in next year’s draft.

Gilliam was the other side of the Sowell surprise coin. Expected to take over the starting left tackle role, Gilliam was supplanted by Sowell and wound up back on the right side. After a couple up and down games to start the year, Gilliam’s play has evened out. The last two games also came against less competition than the first two though. San Francisco’s pass rush is unimpressive, and at right tackle Gilliam didn’t see as much of the Jets’ three talented defensive linemen.

Gilliam is a bit like Sowell in that he doesn’t have any striking strengths and struggles a bit in all facets of the game. His athleticism helps him against speed rushers, but he’s not consistent enough in his technique to avoid getting beat. He also struggles to anchor and will give up pressure on speed rushes turned bull rush. This lack of strength shows up most in run defense though, with Gilliam getting little push in the ground game.  If this sounds like a familiar summary of Gilliam, it’s because it’s exactly what we saw last year. There’s certainly a question of how much of his offseason was lost training to play the left side, but so far the lack of improvement is a little discouraging.

I wrote about Mark Glowinski after week 1, and don’t have much to add. Glowinski would struggle in week 2, but Aaron Donald aside he’s maintained his high level of play from week 1. Glow is athletic, technically sound, and determined. Despite his inexperience, he seems to make very few mental mistakes. His only problem area is still his strength. Because of the zone blocking scheme, his strength tends to be a bigger issue in pass protection than run blocking. Glow can get bullied by defensive tackles and end up in Russel Wilson’s lap. He’s generally using leverage and footwork to turn the defender out and slide them out the back of the pocket, but it’s disruptive all the same.

All in all, Glowinski looks like a building block for this offensive line for years to come. A second contract is still a few years away, but at this rate there is no reason to think he won’t earn it with Seattle.

Webb’s first game was atrocious, but he had the bad fortune of lining up against Ndamukung Suh for most of the game. And against LA he saw a bit of Aaron Donald, an even tougher matchup. But even against San Francisco, Webb performed pretty poorly. And aside from his poor to bad plays, Webb managed to make very few good plays. The three ++ plays I had him down for were the fewest by a wide margin, five less than Sowell who was next lowest with eight.

Webb wasn’t expected to contribute much as a pass protector, and he fell well short of the low bar set for him. Webb struggled against quickness, but was gave up pressures to simple bull rushes. He also seemed to have some issues with his assignments and mental mistakes, although that’s hard to say for sure without knowing the play calls.  Where Webb was supposed to be serviceable was in the run game, where Seattle originally expected him to help them get as big as you can get alongside Ifedi. Webb’s size doesn’t seem to translate to much strength though, and he proved to be the weakest link of Seattle’s offensive line in all facets of the game.

We finally got to see Ifedi, the missing part of Seattle’s dominant interior line from the preseason, in week 4. Ifedi had a rough first half, which was marred by a few mental mistakes. Ifedi managed to shake the rust off, however, and had a fairly dominant second half. He lead the team in ++ plays, with most of those coming after half time.

Ifedi’s dominant play came on both pass plays and run plays. Against pass rushers, this was a common sight.

This is pretty text book pass protection. Ifedi initiates contact with a quick punch, gets his hands under Leonard Williams’ pads, and  just walks Williams out of the play. That punch shows up on run blocks as well.

Ifedi showed violent hands and quick feet, and he also showed the mean streak he’s started to get a reputation for. Ifedi wants to finish every play putting a defensive lineman on the turf, and he did exactly that more than a few times against the Jets. It’s only been one week, but the interior of the Seattle offensive line looked like it picked up where it left off in the preseason.

Justin Britt has been, without a doubt, Seattle’s best offensive linemen this season. And whats maybe the most amazing thing about that is that I’m not sure he’s that different of a player. He’s shown some of the same weaknesses that he displayed in the past, but the center position fits him perfectly. Britt looks to have already mastered the position, picking up blitzes and helping his guards seamlessly. And as he’s settled into the position, Britt has moved from looking for work to hunting for it. Britt finds and take opportunities to knock defenders, who are being blocked by a guard, on their butt. Britt is playing at a pro bowl level, and it’s been an absolute treat to watch.