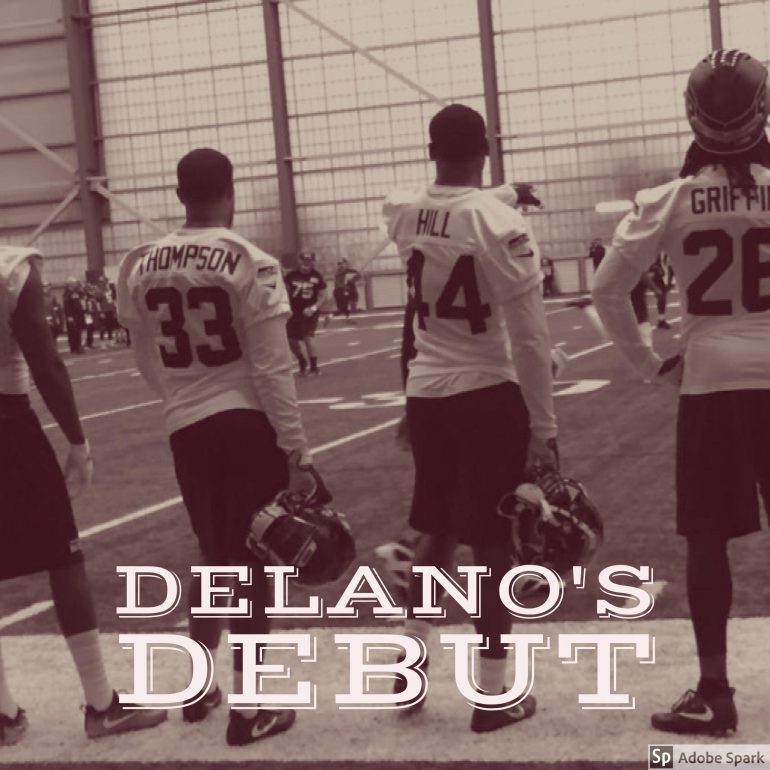 Delano Hill was drafted by the Seahawks 95th overall, after Shaquill Griffin and before Nazair Jones. Hill was not a widely known prospect, overshadowed by team mate and fellow safety Jabrill Peppers in what was touted as a particularly deep draft for DBs. Despite the modest pedigree, Hill showed some special qualities while at Michigan. His ability to hit and make open field tackles immediately jumps off the tape.

We got our first chance to see Hill make those kinds of plays in a Seahawks uniform last Sunday. Delano played 19 snaps, starting on the second series and playing with second team defense. He played 7 snaps in the box and 12 snaps as a deep safety, with several of those coming as the single high safety. While playing in the box, Delano showed off some of his trademark physicality.

Hill (42) and McDonald (41) getting through blockers to make a tackle for no gain https://t.co/vvuUmU5QNy

This first play is a bit of a mixed bag. The positive is that Delano’s physicality is immediately apparent. The tight end on this play has a clean look at Hill and goes for a bit of a kill shot. But Hill is only slightly staggered and is able to shoot the gap and make a play in the backfield.

The negative here is that Hill was likely responsible for setting the edge on the play, and he gets stuck on the inside of the tight end. Hill makes the tackle, but the play is won by Smith and Harris penetrating and disrupting the running back. Had the running back been able to hit this more cleanly, he would’ve had a good shot at making a big play up the sideline.

Here Delano does a much better job setting the edge, blowing through the block by the fullback. He over pursues the play a tad, but is successful in disrupting the running back and allowing McDonald to make the big tackle for loss.

Our best looks at Hill in coverage mostly come while he was playing in the box, as the NFL doesn’t provide All 22 film in the preseason. Hill was mainly asked to cover tight ends, and looked mostly good doing so.

Hill misses the jam on the tight end’s release when he bites on the fake to to the outside, but shows some nimble footwork and good acceleration to recover. After initially being shaken, Hill is right in the tight end’s hip pocket. A second angle shows us the rest of this play.

Here we can see the top of the route. The tight end has no separation and attempts to push off on Hill while he breaks to the outside. Delano barely budges and smoothly flips his hips, smothering the route.

Hill’s jam is much better here, staggering the tight end. Hill then runs with him stride for stride as far as we can see down the field.

Delano was only challenged once while in coverage. That came on Cardale Jones’ first pass and was completed for a 38 yard gain to tight end Matt Weiser.

Despite giving up the catch, Delano’s coverage looked solid. Hill was running stride for stride with Weiser, but the pass was slightly underthrown by Jones. Hill reaches back to attempt to break up the pass, but ends up outrunning the play by a few inches.

Without the All 22 film, it’s all but impossible to get an idea of how Hill played as a single high safety. All we can say is that the Chargers did not take a single shot deep downfield while Hill was playing single high. While it’ll be interesting to see his play there, we’ll likely rarely see him play center field in real games. Hill will be used much the same way as Kam Chancellor is used and, while there is only one Enforcer, Hill looks well suited for the role.