Only change here is I have the team keeping 7 receivers and 4 backs. Marcel Reece will likely be cut to get around the NFL rule that guarantees veteran contracts if they are on the roster week one. That also allows them to keep J.D. McKissic to ease Tyler Lockett’s return to the field. 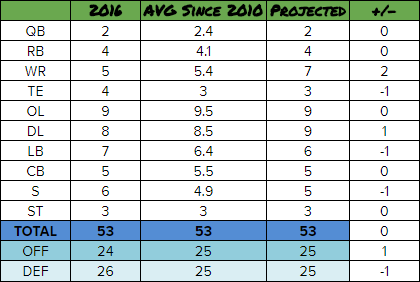 The rookie did very little to earn his spot, but he only needed to do a little. Such is life when you are a third round pick. The trade of Jermaine Kearse makes the decision easier for Seattle. They can keep seven at this position (six if you count McKissic as a running back), and not have to let Kasen Williams, Darboh, or McEvoy go.

J.D. McKissic makes it for now

It is too risky to rely on Lockett for the return game week one. McKissic should make it for that reason alone, but also provides some depth at running back and receiver and is pretty darn good in kick coverage as well.

Either David Bass or Marcus Smith will not make it

Smith and Bass have both done more than enough to earn a spot. Bass has arguably been the best defensive player for the Seahawks through the preseason. His ability to play inside and out, and better overall production, is why I wound up projecting him to make the squad. Smith is a year younger and is a better athlete, but I think he is purely a defensive end. One of the two most painful cuts.

Neiko Thorpe out, Tedric Thompson in

The team’s best special teams player from a year ago is on the outside looking in. This was the second of two tough cuts. I could easily imagine Brian Schneider pounding the table for Thorpe, but he’s a vet, and really is not a great option at corner. That would mean guaranteeing a contract for a special teams guy. The team also saves over $700K by letting him go. They have enough really good special teams players that they can afford to gamble here. Thompson is a fourth round pick and may not survive waivers.

This was a late breaker. Rubin has a contract that makes it appealing to move on, and his play has been middling this preseason. Coe has been an under-the-radar performer all through camp. He is stout against the run, and has a nasty streak. There is also a chance the team could acquire a run stuffer from somewhere else. I picked Coe over Smith because the team will be taking a risk by letting Rubin go, and need more than just Jarran Reed and Naz Jones to replace him.

Desir has been the top-rated corner in the NFL this preseason, per PFF. He earns a spot.