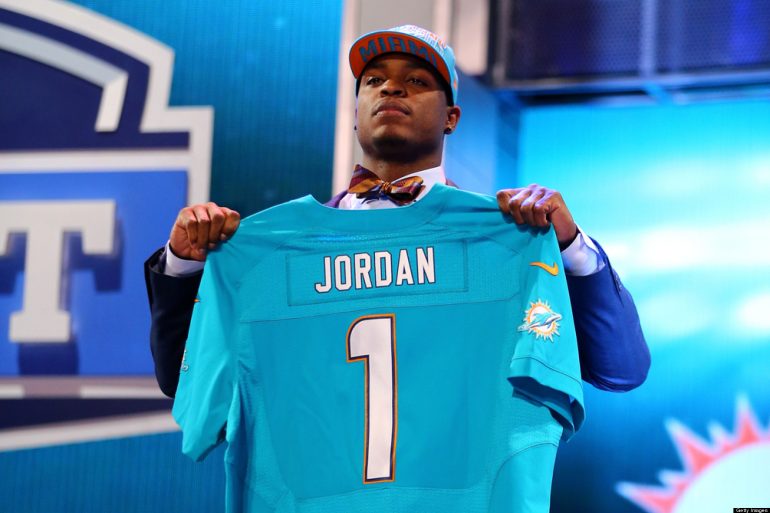 NEW YORK, NY - APRIL 25: Dion Jordan of the Oregon Ducks holds up a jersey on stage after he was picked #3 overall by the Miami Dolphins in the first round of the 2013 NFL Draft at Radio City Music Hall on April 25, 2013 in New York City. (Photo by Al Bello/Getty Images)

News broke last night that the Seahawks were hosting Dwight Freeney for a visit. The 37-year-old pass rush specialist last played for the Falcons in the Super Bowl, recording a sack. Cliff Avril was put on injured reserve. There is an open roster spot. Why not? Bringing aboard the veteran may be the wise move, but Seattle has a series of upcoming roster decisions that need to be factored in. DeShawn Shead, Dion Jordan, and even Malik McDowell may all be on their way back to the field. John Schneider is certainly thinking through all the permutations of roster shuffling depending on who comes back and when, so let’s have a bit of fun and do the same.

Freeney is visiting the Seahawks today. Avril is unlikely to be back this season, if at all. Seattle has yet to fill Avril’s roster spot after placing him on injured reserve, so nobody would need to be cut in order to bring Freeney aboard. What they would have to do is spend money on a veteran salary. The team has precious little cap space, so even a veteran minimum addition is something they have to think through.

Every dollar spent filling Avril’s vacant roster spot is a dollar that has to be saved elsewhere if the team still hopes to trade for a left tackle. What Freeney provides is proven pass rush and veteran savvy that can be shared with youngsters. He is also a bird in hand, so to speak. All the team needs to do is get him to sign on the dotted line. No other moves necessary.

The Seahawks did not have to sign Shead this offseason. They knew he was going to miss a large chunk of the season recovering from knee surgery, but they were also not the only ones interested in his services. That they did spend the money on him makes it likely they plan to add him to the roster once healthy. The team already has five cornerbacks:

It is unclear how Lane fits in when he returns. Coleman is the better player, but the coaching staff may not agree and prefer the experience of Lane. Thorpe is a special teams ace and is very unlikely to be going anywhere. What to do with Shead?

There are really two options:

There are plenty of reasons to believe the team is actively shopping Lane. They could use his cap space for other purposes, and they have superior players on the team. His recent injury is not helping the cause. The alternative would be to let rookie safety Thompson go. He has been inactive for every game and does not have a lot of upside. The team could probably sneak him onto the practice squad if they want.

Shead also has played both safety and cornerback in his pro career, so he can cover what would have been Thompson’s duties.

Shead is almost a sure thing. Jordan is far more speculative. The team could have cut him as injured a long time ago, but chose to stick with him for a reason. Pete Carroll is excited about his potential as a pass rusher, and Jordan is said to be getting closer to hitting the practice field. He was a top five pick in the draft years ago, but has never flashed in the NFL due to injury and some drug issues.

The first question to answer about a future where Jordan gets added to the roster is what position he would play. Drafted as a defensive end, Carroll has mentioned using him as an interior pass rusher. At 6’6″ and somewhere between 265 and 285 pounds, he does not perfectly fit any line spot. He was 248 pounds coming out of school, which would have him in line for Avril’s LEO spot, but the Seahawks currently list him at 275 pounds, which is far too heavy for a speed rush position. We could find out that he has shed some weight during rehab, but it is impossible to know.

The guys at risk of losing their roster spot should Jordan earn his way onto the team are:

Jefferson just returned and is playing with a broken hand. He has yet to cement his place among the line group. He plays a similar role to Michael Bennett as the end opposite the LEO (called the 5-technique) on base defense and an interior rusher in passing situations. Jordan may have a similar job if he sticks at his currently listed weight. Freeney could be jettisoned a few weeks after the team signs him if they like Jordan better, and see him playing the LEO spot.

Upstart defensive end Branden Jackson makes the list mainly because he is so new and the team is just learning what he can offer. As of now, he has the best pass rush grade of any defensive linemen on the Seahawks, but that was in limited action. Expect the team to give him more opportunities to see just what they have here.

Marcus Smith is a guy the team likes a lot, but his play has dropped in recent weeks. I think they see him as a longer-term LEO prospect that they are unlikely to want to move on from, but he is not safe.

The young defensive lineman was reportedly at risk of never being able to play football again. That still may be the case, but we know he has now been cleared to work out with the team, which indicates some positive movement. If the unexpected happens, and he is cleared to return to the field of play, there will be a series of decisions to make.

First, McDowell’s salary does not currently count against the cap. He has a $1.2M cap number, and the Seahawks have just $1.7M in cap space. There is some pro-rating that would happen, but it will still be a decent chunk of change. I have also been told that if McDowell stays on the non-football injury list for the whole year, his rookie contract will not start until next season, so the team has some incentive to leave him out even if he does get cleared.

Forget all the contract mess for a second and just focus on the roster implications of adding a player the team once compared to Calais Campbell. He was meant to be used much like Bennett, and a bit like Sheldon Richardson. He could play the 5-technique defensive end in certain situations and the 3-technique interior pass rusher on passing downs. Richardson currently does the 3-tech work alongside Bennett.

All four of the guys listed as possible cuts if Jordan returns would be at risk here as well, but I would add Garrison Smith to the mix. Smith is a run-stuffing defensive tackle who the team trusts. Given the problems they had earlier in the year, they are less likely to want to remove him. His addition also coincided with the improved run defense. Still, McDowell is a defensive tackle and the team can only keep so many interior players.

McDowell would battle for snaps with Nazair Jones, Bennett, Richardson and Jarran Reed. My guess is they would look to give Bennett the most relief as he is battling injury and is leaned on heavily.

Here’s a look at the roster by position group, with the guys I believe are locks to stick around, the possible new additions, and the guys who could lose their spots as a result. I don’t get into the left tackle situation here as that is dependent on the trade requirements. You can assume Lane and Jimmy Graham are the guys who could be impacted by a trade for a left tackle. You can also see the current allocation at each position. When you see 10 below the DL column, that indicates the team currently has 10 defensive linemen on the roster. More than 10 names are listed there, so you can see how they would need to shuffle players off the roster to make room. Those are the bubble guys I highlighted in yellow.