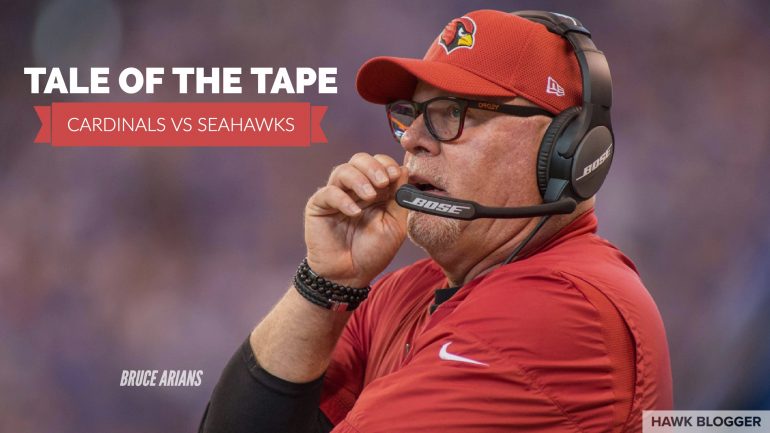 It was hard to have much confidence in the Seahawks after their disastrous beatdown against the Rams. Yet, they went into Dallas against a team with playoff aspirations and their star running back as motivated as ever, and choked the life from their season. Go figure. I had surmised that the Seahawks had no chance to beat the Rams if Bobby Wagner and K.J. Wright were not healthy and playing well. While it would be silly to imply the Seahawks would have won if both players were there, the Dallas game provided ample evidence of just how big of a difference those two can make when facing an elite running back.

The Arizona Cardinals have nothing elite in their backfield. Gone are David Johnson and Adrian Peterson. What remains is Kerwynn Williams and his 3.6 yards per carry. Never mind that his 351 rushing yards dwarfs the nearest active Seahawks running back total (Mike Davis has 192 yards on the year). His battery mate is error-prone Drew Stanton and his 69.7 passer rating. The offensive line is missing both tackles (Jared Veldheer and D.J. Humphries), as well as guards Mike Iupati and Earl Watford. It’s a motley crew.

The defense has been physical and stout all season, but they have a long list of injuries as well. Both starting safeties are now on IR as Tyvon Branch was injured in the last matchup against Seattle and Antoine Bethea just had his season end this week. Even backup safety Rudy Ford was lost to injury. Former Husky Budda Baker has stepped up, and will play a significant role in this game.

Seattle needs to win to have a chance at the playoffs. The Cardinals may be trying to send Bruce Arians off in style as reports are circulating that this will be his last season as the coach. The Seahawks have lost 3 of their past 4 home games this season, and have also lost 3 of their past 4 home games against the Cardinals the past four years. There is little question which team is better, especially given the Cardinals injury status, but these games are rarely easy. Arizona features a number of playmakers on defense, even with a few of them out. Chandler Jones is a terrific pass rusher. Tyrann Mathieu is a clever gambler. Patrick Peterson and Tramon Williams are sticky corners. Baker is the latest addition, and plays with physicality. The defensive line gives the Seahawks trouble, as evidenced by the 5 sacks they recorded in the first matchup. That was a game Seattle won by not making major mistakes. They exited without a turnover. This Cardinals defense will be ultra-aggressive looking for any takeaway knowing their offense cannot win a game without a lot of help.

Seattle did not have Mike Davis in the first matchup, and played much of the game with an injured Duane Brown. Luke Joeckel was also missing in that game. Those three all played the last two weeks and it didn’t appear to matter very much as the Seahawks offense struggled mightily. There is no reason to expect things to get any easier against this Cardinals defense that ranks 4th in the NFL in opponent yards per play.

Arizona really does not have a good answer for Jimmy Graham, especially in the red zone. Mathieu and Baker are undersized at safety. Graham scored twice in the first game, and could do more damage this time. Losing Bethea is a big deal. He was a disciplined safety who also was physical in run support. The Cardinals will likely try to play Mathieu and Baker as safeties in base defense, but may be tempted to swing Mathieu back to nickel corner when the Seahawks bring extra receivers on the field. If not, that would leave Doug Baldwin matched up with someone like Justin Bethel in the slot. That would be a huge advantage for Seattle. If they bring Mathieu in to defend Baldwin, that leaves someone else without much experience to play safety against another Seahawks player.

This is a game where smart scheming on offense could create a lot of big plays for Seattle. The biggest advantage for Arizona is they have nothing to lose. Arians will open his playbook and be willing to do anything at anytime. This very well might be his last game as a coach, and you can bet he will want to go out with a bang. That could mean trick plays, going for it on fourth down at unconventional times, or just aggressive play calls that break typical patterns. Larry Fitzgerald is always an advantage, and he was their only real weapon in the first game. Seattle is missing both Kam Chancellor and Richard Sherman who helped hold down the Cardinals in Arizona, but they now have Earl Thomas who missed that game.

Seattle failed to force an interception by Stanton in the first game. He should have a much rougher time behind this line in this stadium. Will Holden and John Wetzel are the Cardinals two tackles. Frank Clark, Michael Bennett, and Dion Jordan should have their way with those two. Clark has a great chance to record his 10th sack of the season. I’ve got a hunch that this will be the game rookie Shaquill Griffin gets his first pick.

Like other parts of this game, I expect Arians to be aggressive here. Fake punts, onsides kicks, are all on the table. Seattle can gain significant advantages by being prepared for those types of shenanigans.