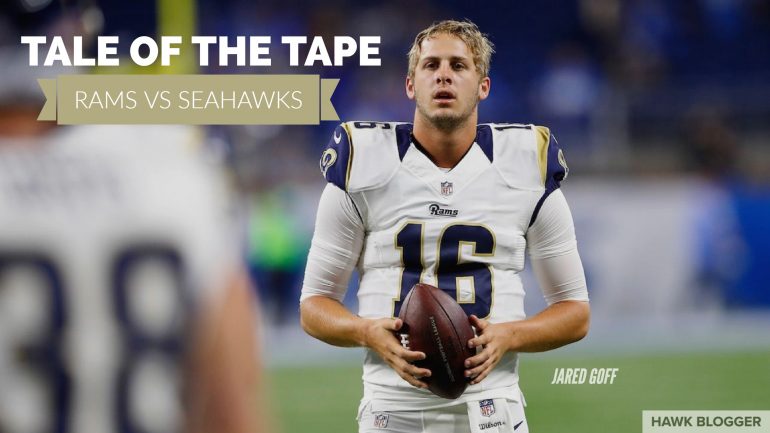 Seattle completes a trifecta of games against top ten opponents as they host the Los Angeles Rams in a contest that will likely determine which team wins the NFC West division. Despite coming in with a lesser record, the Seahawks would hold the tiebreaker over the Rams with a victory on Sunday since it would mean they swept the season series. Both teams come in 2-2 in their last four games, but it is Seattle that has serious injuries that have decimated their defense. Quite simply, if Bobby Wagner and K.J. Wright do not play this weekend, the Seahawks do not win this game. If only Wright plays, the Seahawks likely do not win this game. If both players are able to suit up and play effectively, Seattle will be in great shape to win another division title. 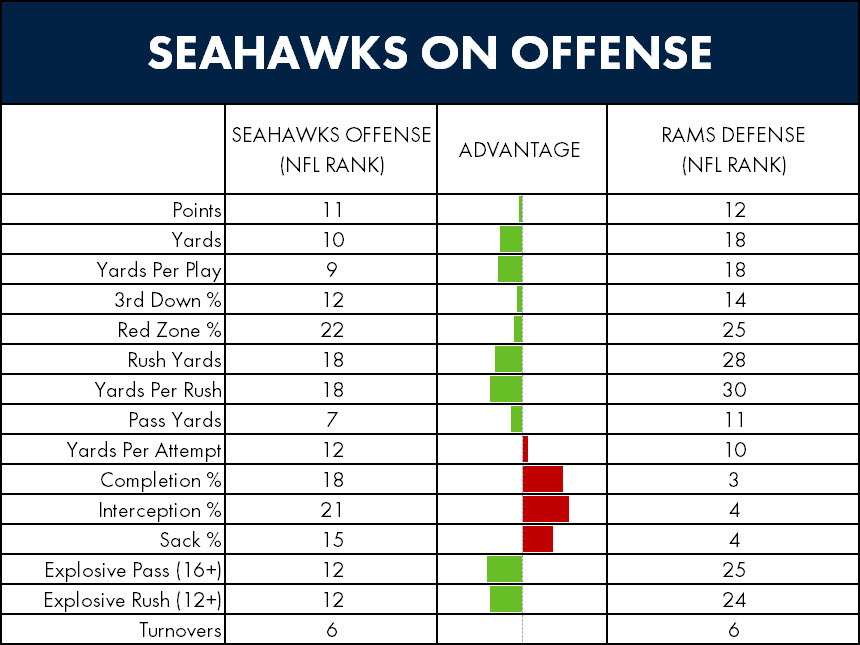 It always starts with Aaron Donald. The one-man wrecking crew is always a problem, and he will be again on Sunday. Michael Brockers and Robert Quinn join him, along with a cast of characters capable of rushing the passer as well as any team in football. Interestingly, this group managed just three sacks in the first matchup. Of the 20 total pressures they created that were attributed to the Seahawks offensive line, 14 were attributed to players who are no longer in the lineup for Seattle (LT Rees Odhiambo gave up 8 pressures, RG Oday Aboushi gave up 6 pressures). For the first time in recent memory, it is not clear that the overall Rams defensive line has the advantage of the Seahawks offensive line. Donald has the advantage over anyone he plays, but the rest is not so clear.

Alec Ogletree can be caught out of position and give up some big plays, but he is also arguably the best player I have seen at tracking down Russell Wilson on scrambles and keepers. He hits Wilson hard. Given the Seahawks reliance on Wilson’s legs, that is a matchup to watch.

There are very few times when the Rams defense is a welcome sight for the Seahawks offense. This might be one of those times. After playing the Eagles and the Jaguars, the Rams defense looks vulnerable in comparison. Over the past four weeks, they rank 28th in points allowed, 28th in passing yards allowed, 28th in rush yards allowed and 32nd in opponent yards per rush at over 5.1 yards per tote. They also just lost one of their starting cornerbacks, Kayvon Webster, and will need to lean on someone like Troy Hill to step forward. Their other corner, Trumaine Johnson, was injured this weekend as well and his outlook is unclear.

A key situation to watch for Seattle is whether Mike Davis will be able to play. He left the game against Jacksonville with a rib injury. I don’t envy a running back facing Donald with a rib injury. Seattle, though, has gone over 100 yards rushing in each of the games Davis has started. In fact, the Seahawks are 8th in the NFL in yards per carry (4.6) over the past four weeks. Duane Brown is a huge addition who has teamed effectively with Joeckel and Justin Britt in recent weeks. The Seahawks have a real chance to establish a productive run game against the Rams, but will need help from their defense to keep the game close so that the rushing attack can be employed.

Los Angeles has a tough time avoiding explosive plays. It is surprising to see such a talented defense rank in the bottom third of the NFL in both explosive passes and explosive rushes allowed. The Seahawks offense was explosive, if not consistent, against the Jaguars this weekend. There will be opportunities for Wilson to hit some big plays downfield. He needs to make the throws. Seattle is likely going to need to score 27 points or more to win this game. 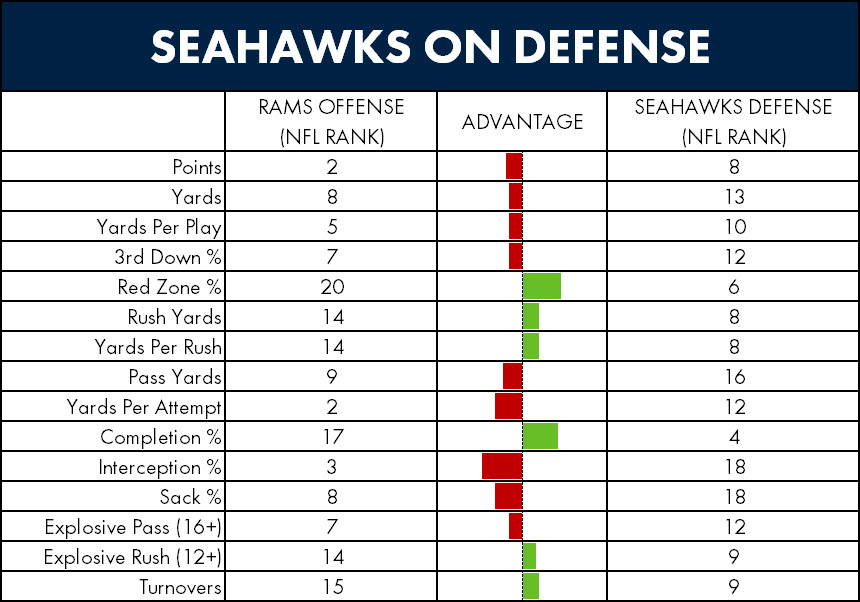 Sean McVay is by far the Rams biggest advantage. He calls a wonderful game and creates high probability throws for his young quarterback to take advantage of. Jared Goff rarely needs to fit a ball in a tight spot. His receivers regularly are 3-5 yards free of their defenders. Despite scoring just 10 points in the first matchup, the Rams had 10 explosive plays. That included 8 explosive passes. They are getting back receiver Robert Woods, who has been out a few weeks, and will be facing a Seahawks defense that won’t have Richard Sherman or Kam Chancellor. Sherman played one of his best games of the year against the Rams in the first matchup.

Expect the Rams to attack Seattle on the ground. If Wagner and Wright are out, the Seahawks will have little chance to stop the Rams run game. Todd Gurley started strong, but was shut down for much of the first game. There has been talk of dissatisfaction with the lack of carries for Gurley in Los Angeles. That, combined with the potential matchup advantage in the run game, and challenge of pass protecting in Seattle, makes me think the Rams are going to lean heavily on the ground attack.

After Blake Bortles torches the Seahawks, they are now 24th in the NFL over the past four weeks in opponent passer rating (95.3) after being 5th (76.9) through the first 10 games with Sherman and Chancellor in the lineup. Keep in mind that Wagner and Wright excel in pass defense as well. Their absence would be huge in defending the middle of the field. If Seattle has any hope of slowing this Rams offense, it has to start with an effective pass rush. They were a no-show in Jacksonville. Do that again, and the Rams may hang 40 points on this defense.

If Wagner and Wright can play effectively, the Seahawks run defense could be a key to winning. They had been terrific leading up to the Jaguars game, and were doing okay after giving up an early big run in that contest, but it all fell apart when Wagner and Wright exited. Seattle had been the best run defense in football over the previous seven weeks. They need to be stout in order to put the Rams in more 3rd and long situations.

Both Rams tackles left their last game with injuries. Andrew Whitworth returned, and is expected to play, but he struggled against Frank Clark in the first matchup and may be less able to handle him with a bum ankle. Rob Havenstein had a terrible day against the Seahawks, allowing 6 total pressures. His backup surrendered a key strip sack against the Eagles. Dion Jordan may be returning this week for the Seahawks, and Nazair Jones is a possibility as well. They will need all the help they can get in getting to the quarterback.

The Rams have a huge advantage on special teams. They have arguably the best kicker and best punter in the game, and have great coverage teams. They blocked another punt last week, and have been a key part of a number of wins for them this season. Both Seattle kickers have struggled, and coverage sprung a leak last week against the Jaguars. Seattle has to cross their fingers whenever the special teams are involved this weekend.