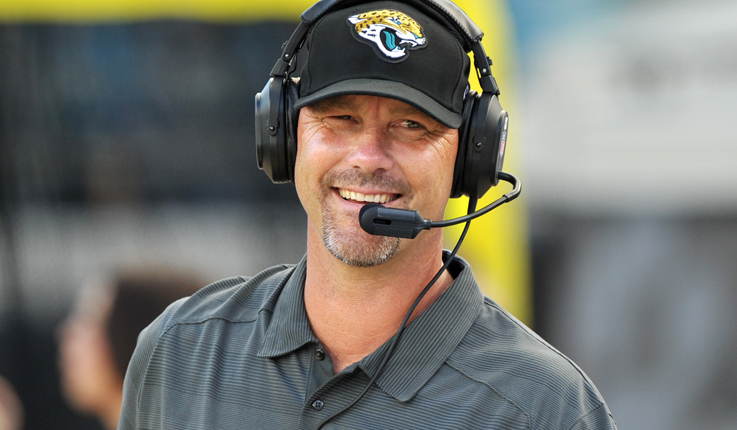 The Implications of a Gus Bradley Return to the Seahawks

Adam Schefter reported yesterday that the Seahawks have interest in bringing Gus Bradley back to Seattle. Bradley, as you may recall, was the Seahawks defensive coordinator from 2009 through 2012. Yes, he predates Pete Carroll and stands as the one good thing Jim Mora Jr. did for this franchise. He went on to become the head coach of the Jacksonville Jaguars for four seasons and then the defensive coordinator for the Los Angeles Chargers. He signed a one-year deal with the Chargers, and is now a hot commodity on the coaching market. Why would someone with a good shot at a head coaching position be interested in returning to his old Seahawks stomping grounds when Pete Carroll is entrenched in the top spot? Good question. Let’s discuss.

First, let’s look at what Bradley has done in his NFL career. His first two seasons as defensive coordinator in Seattle were not exactly resume builders. The Seahawks finished 24th in points allows and 26th in yards allowed in 2009 and then 27th in both categories the following season, which was his first under Carroll. Both of those defenses were severely lacking in talent. Kelly Jennings was still around, as were starters like Kentwan Balmer, and aging Lofa Tatupu, David Hawthorne, and Marcus Trufant. Things turned in 2011 once the full Legion of Boom took the field. Bradley was part of the leadership that assembled and utilized the unique talents that formed that secondary. Many people thought they were crazy for having 6’4″ and 6’3″ corners in Brandon Browner and Richard Sherman. It seems obvious now, but it was a grand experiment back then and Bradley was the one responsible for that defense, even if Carroll was there behind the scenes.

At least some folks will point out that 2012 Seahawks defense had some problems closing out games, including the divisional playoff loss in Atlanta. Those same people are unlikely to point out the inferior pass rush Bradley dealt with during his tenure. Chris Clemons was pretty much the only threat, and when he was injured in the playoff win over Washington, the only remaining option was undersized rookie Bruce Irvin against the Falcons.

Carroll made pass rush the top offseason priority after that loss, which led to adding guys like Cliff Avril and Michael Bennett. Bradley never got to coach that defense as he had moved on to Jacksonville.

I remember meeting Bradley and talking to him a few times after our first meeting. He is remarkably engaging, friendly, and energetic. Nobody I have met in football comes close to matching Carroll’s boundless positive energy than Bradley. Monte Kiffin, the famed Tampa Bay defensive mastermind, once said this about Bradley to Mora:

“[Jim], listen to me. I have got a guy here in Tampa that is one of, if not, the finest football coaches I have ever worked with. He’s an A-plus. He’s a once-in-a-lifetime coach. You need to talk to him”

Carroll had no intention of keeping anyone from Mora’s staff, but Bradley wowed him so much that he won the job, while teaming with Dan Quinn to form one of the most talented defensive coaching rooms the NFL has seen in the last 20 years.

Bradley did not fare so well in Jacksonville, but a significant portion of that blame has to land on the general manager for the talent Bradley was given. Jaguars defenses finished 27th, 26th, and 24th in his first three seasons as coach. That turned in Bradley’s final season when they finished 6th. One has to wonder if Bradley would have replicated new coach Doug Marrone’s success this season if he had the benefit of Calais Campbell, A.J. Bouye, and Leonard Fournette. Keep in mind, Todd Wash, the Jaguars defensive coordinator this year was a Bradley hire.

Bradley was highly sought after despite his dismal record in Jacksonville and landed with the Chargers where he oversaw a major turnaround on defense. Los Angeles finished ranked 3rd in points allowed, the highest a Chargers defense has finished since 1979. Notice a pattern?

My assumption was that he would parlay that success into a new head coaching gig, either in the NFL or in college. He’d be an unreal program builder in college. It had not really occurred to me that he might consider returning to Seattle, both because it would seem like a step back in time and because it would be a lateral move. Then, it clicked after hearing Schefter’s report.

I have been hearing rumblings since the season ended that the Seahawks do not plan to bring back Kris Richard. I also believe, but have not been told, that Tom Cable could also be on his way out. If I was in Carroll and Schneider’s shoes, and wanted to attract back a top coaching talent like Bradley, I would figure out a way to paint this as a compelling step forward in his career.

The story would go something like this, “Come back and take over a defense you know well with a variety of players you know well. Help us rebuild with a new young core. We will make you the assistant head coach and the clear second-in-command on the coaching staff. Pete may either retire or move into a different role in the organization in a few years. You would be in great position to take over should that happen, and you know Pete will help you get another head coaching gig before then if you get the itch.”

Fine, but he could possibly get another head coaching job now. Why wait? Bradley saw how hard it is to win without a good general manager and without a good quarterback. Seattle already has both, and they should be around for the next decade. It also has the best owner in the league. Having those pieces in place make a massive difference in a head coaches success and the perception of him around the league.

Look at Bill Belichick. He was an under .500 coach in Cleveland before joining up with Tom Brady and Robert Kraft in New England. He is in the conversation for the best coach in history, but I have doubts about whether that would be the case if he wound up elsewhere or with a different quarterback.

People often wrongly assume that the only way forward in a career is escalating responsibilities and titles. Some people are blinded by that. Wiser folks pay attention to what leads to success and happiness and chase those instead. This is a situation where Bradley could have gained some of this wisdom through his first head coaching experience that will set him up for a far more successful and rewarding second stint.

Just the fact that Seattle appears to be pursuing him is a strong signal that Carroll and Schneider do not appear interested in standing still. Richard would appear to be the safest of the people on the coaching staff. Not only has the defense been a better part of the team the past two seasons, but Richard has been with Carroll since USC. He even played for Carroll. Sending him packing means nobody is safe on that staff.

I could see a few different ways this could break if Bradley were to get hired. Perhaps most likely, Bradley would replace Cable as assistant head coach and run the defense. Cable would be let go. The team has kept two assistant head coaches before, but I think they would want to put Bradley in a stronger position. Removing Cable would also allow the team to consolidate offensive responsibilities under Darrell Bevell. Cable has been the line coach and the run game coordinator and outranked Bevell on the staff. That has made for a challenging dynamic at times.

It would not surprise me to see the team decide to give Bevell an opportunity to fully control the offense. That would also provide some stability on the staff. I would like to see them move on from Bevell as well for reasons I have previously outlined, but I would understand the logic of how things could change without Cable in the picture.

This is just the start of what should be an eventful and pivotal offseason.