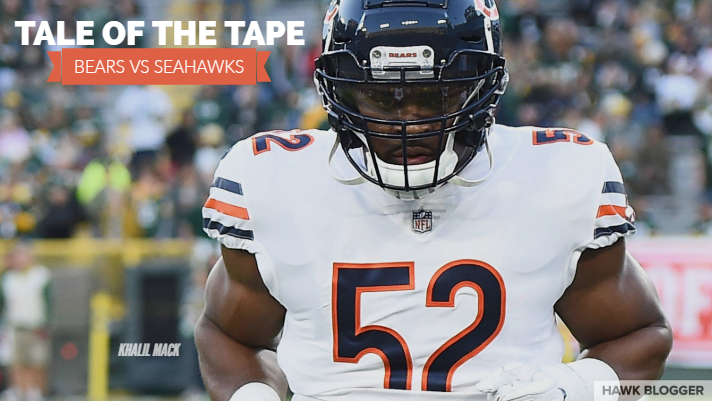 Tale of the Tape: Seahawks Face Second Straight Mediocre Team on the Road

It should have come as no surprise that the Seahawks lost their road opener last week in Denver. They pretty much do that every year, and Denver never loses at home early. That said, the Seahawks lost in an unfamiliar fashion. They scored 24 points, and should have had at least 27. The created three turnovers, and could have had five with a faster replay challenge and simple catch of a tipped pass. Depending on your outlook on life, that is either discouraging that they still lost or encouraging that they demonstrated some playmaking ability.

This week they face the Chicago Bears, who are similar to the Broncos on defense but less experienced on offense. They were on their way to shocking Green Bay in Lambeau Field last week until Aaron Rodgers led a crushing comeback on one leg. Chicago will be eager to get back on the field for their home opener in primetime on Monday night. Seattle would have a better chance to get the road win if they were playing a typical Sunday game. It is going to take a far superior defensive performance than what they did in Denver for the Seahawks to beat the Bears. It is not clear where that improvement will come from. There will not be two better edge rushers the Seahawks will face than Von Miller and Khalil Mack in consecutive weeks. Ifedi did not perform as poorly as many would have you think, but remains a major liability in pass protection. Miller got one of his sacks by looping inside where J.R. Sweezy did not pick him up. Expect the Bears to try similar games until the Seahawks prove they can communicate effectively in those situations.

It doesn’t stop there. Akiem Hicks is a load on the interior line and Leonard Floyd is a handful on the other edge.  I would argue the Bears have a better pass rush than the Broncos, who finished with six sacks last week. Seattle coaches know that, and will adjust to a heavier reliance on the run game and more quick passes.

The trouble there is Chicago is pretty good defending the run. They gave up 69 yards to the Packers on the ground. The Bears will finish as one of the top ten defenses in football this season. Seattle can prove a lot by putting up some points against them in this atmosphere.

Brandon Marshall faces a former employer for the second straight week. He will enjoy a size advantage over whichever corner the Bears throw his way. With Doug Baldwin out, look for Marshall to be a bigger part of the Seahawks offense. This is the type of game where a large possession receiver who can make contested catches could be a big factor. Wilson almost certainly will be focused on getting the ball out faster this week and he will not be able to count on his receivers getting open quickly. Marshall gives him a target who is strongest in the short-to-intermediate game.

Will Dissly deserves a mention given his shocking debut. Defenses are now aware of him, but I doubt they respect him yet. There is still opportunity to surprise the defense and force them to adjust.

Chris Carson split carries with Rashaad Penny last week. It sounds like that will not be the case this week. Carson has earned the right to be lead dog in the backfield, and has yet to have his coming out party. Seattle’s ability to not only gain yards on the ground, but feature him through the air is going to be a key to this game. His blitz pickup is also among the best in the league for his position.

The secret weapon I hope the Seahawks deploy is C.J. Prosise. Penny took all the third-down reps against Denver. I would love to see Prosise back in that role as he has demonstrated far more big play ability. And maybe…just maybe…David Moore will get a chance to make one big play down the field. Tarik Cohen and Taylor Gabriel are two names to watch. Both are game-breaking little fellas who excel at taking short throws and turning them into long gains. Ask Phillip Lindsay how that works against the Seahawks defense. Seattle has to be aware of these two at all times and rally to the ball to bring them down. Chicago would be wise to make them a central part of their game plan until the Seahawks prove they can defend the swings and screens where Cohen and Gabriel excel.

Jordan Howard is a workhorse who will test a Seahawks defensive line that has not proven it can stop the run. Seattle will have their hands full slowing him down.

Case Keenum is not exactly elite, but he is far more savvy than Bears second-year QB Mitch Trubisky. Keenum made some awful throws that kept the Seahawks in the game, but also was able to take advantage of blown coverages. Trubisky has not been very good to this point. He threw as many interceptions as touchdowns a year ago on the way to a dismal 77.5 passer rating. He was not any better in Green Bay where he finished with a 77.2 rating and no touchdowns. His yards per attempt was a cringe-worthy 4.9. Carson averaged more yards per rush than that, by a lot.

Earl Thomas and Bradley McDougald were easily the best part of a highly questionable Seahawks defense in week one. Their ability to choke the middle of the field and break aggressively on underneath throws could lead to some good results.

The wide receiver crew is not exactly intimidating. Allen Robinson was once good. Gabriel is better in the short field than on deep throws. Trubisky and his receivers have not proven they can threaten down the field. That should make life easier for the young secondary.

Chicago’s offensive line is not good. Their center, Cody Whitehair is the weakest link. Jarran Reed and Tom Johnson should have chances to make big plays. Dion Jordan will play more reps this week and needs to beat Bobby Massie a few times.

Michael Dickson proved again how powerful of a weapon he can be in the loss to Denver. That game is probably not close with the punting performances we have seen the past few years. Dickson will be relied upon again in a game where the offense will likely struggle to consistently move the ball against a stout Bears defense.

Keep an eye out on Penny taking over kickoff return duties with Tyler Lockett filling in for Doug Baldwin on offense. The Seahawks may choose to give him some more rest on special teams, opening the door for Penny.