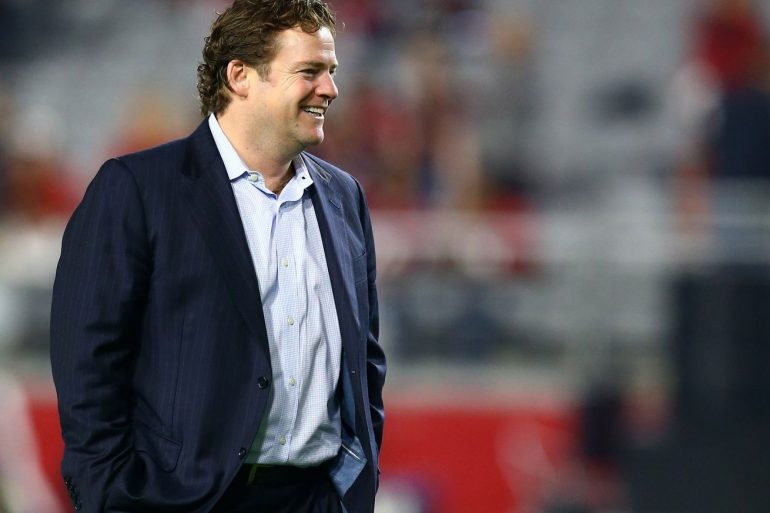 2019 Mock Draft: What Seahawks should do in Round 1

The NFL Draft just got a lot more exciting for Seahawks fans.

Trading Frank Clark was a difficult move from an overall talent standpoint, but a very wise move by John Schneider, because it not only opened up plenty of cap space fprthe coming years, but also provided the team with much needed immediatelt draft capital, given they only had four picks in total entering Tuesday.

This was basically the reverse of the Percy Harvin trade from 2013 (thank you John) and now gives the Seahawks way more flexibility entering Thursday and potentially Friday.

Do the Seahawks swap down both first rounders? Do they use both? Do they move only No. 21 or No. 29? Do they even move up given they now have 12 picks lined up for 2020. The possibilities seem endless.

No matter which route they choose, they need to address three positions in 2019 draft: Wide receiver, safety, and edge rusher.

Staff Nathan Ernst has been exploring plenty of the trade down scenarios, which still seem likely with only five picks and Schneider’s draft history, but here’s one scenario of what the Seahawks could do if they decide to use both firsts to upgrade their talent level.

1) Arizona Cardinals: Kyler Murray (QB, Oklahoma) — One year after trading up to draft Josh Rosen, the Cardinals completely scrap that plan and kick off their rebuild under Kliff Kingsbury with a new franchise QB.

2) San Francisco 49ers: Nick Bosa (EDGE, Ohio State) — The NFC West keeps getting stronger. After acquiring Dee Ford in a trade, the 49ers continue to reload its defensive line by adding the consensus top player in the draft.

3) New York Jets: Ed Oliver (DT , Houston) — The Jets really want to trade down from this spot to recoup the picks they lost in the Sam Darnold trade, but in this scenario, the Jets can’t find a taker and add another monster interior rusher to fit in Gregg Williams’ defense

4) Oakland Raiders: Quinnen Williams (DT, Alabama) — The Raiders need building blocks on defense, after dealing Khalil Mack, and Williams is a great fit to be the new centrepiece of their defensive line. Even Jon Gruden couldn’t screw this pick up.

5) Tampa Bay Buccaneers: Devin White (LB, LSU) — Bruce Arians’ new squad has a ton of needs on defense, so they can go BPA. White is an all-around linebacker tha’s built for the modern game, and good fit to replace Kwon Alexander for a defense that has lacked an identity in recent seasons.

6) New York Giants: Josh Allen (EDGE, Kentucky) —Conventional widsom says the Giants should take a QB here, but logic and smart team building doesn’t seem to apply to GM Dave Gettleman and the Giants. So the Giants continue to ride out this Eli thing and go with the top pass rusher.

7) Jacksonville Jaguars: T.J Hockenson (TE, Iowa) — This could be an offensive lineman as the team needs an upgrade at right tackle, but after investing so much money in Nick Foles, the Jags should go with a an all-around to boost the passing game. Hockenson is also a very good run blocker, which their old school coach will love.

8) Detroit Lions: Jonah Williams (OT, Alabama) — Matt Patricia likely wants to move down here, given that Hockenson is off the board, but if the Lions are forced to select here, the team goes with Williams to upgrade a unit that lost T.J. Lang to retirement and still needs to get better protecting Matthew Stafford.

9) Buffalo Bills: Andre Dillard (OT, Washington State) — The Bills could still use some playmakers for Josh Allen, but there just isn’t one worthy of this slot, so instead the Bills continue to upgrade their offensive line and go with the best pass protecting tackle available.

10) Denver Broncos: Devin Bush (LB, Michigan) — The Drew Lock rumor continues to linger, but Vic Fangio pleads the team not to make another monumental mistake at the position and gets a key building block and sideline to sideline linebacker in the middle of his defense, like he had in Chicago and San Francisco.

11) Cincinnati Bengals: Dwayne Haskins (QB, Ohio State) —  New head coach Zac Taylor wants to get the franchise out of Andy Dalton purgatory and brings in Haskins to put some life into the post-Marvin Lewis era. Haskins has limited experience but more upside than most of the QBs in this class.

12) Green Bay Packers: Noah Fant (TE, Iowa) — The Jimmy Graham signing (who would’ve guessed) turned out to be disastrous for the Packers, so Green Bay double downs on the spot to bring in a young, athletic tight end that can stretch the field to give Aaron Rodgers another weapon beyond Davante Adams. Selecting Fant allows the team to move on from Graham after the 2019 season.

13) Miami Dolphins: Jawaan Taylor (OT, Florida) — Don’t expect the Dolphins to take a QB here. Their entire off-season has been geared towards setting the team up for a tankjob that should coincide with a post-Brady rebuild. Instead, the Dolphins begin to set their foundation up front with a quality lineman that can be a book end with Laremy Tunsil. A great pair for whoever becomes the future QB.

14) Atlanta Falcons: Christian Wilkins (DT, Clemson) — Dan Quinn loves his defensive linemen, so the Falcons bring in another high pick to pair with Grady Jarrett in the middle of their defense. Wilkins should help boost a mediocre run defense and provide some more interior pass rush.

15) Washington Redskins: Drew Lock (QB, Missouri ) — This could be a QB if Washington can’t pull off the Josh Rosen trade, so with Haskins off the board, the Redskins pass on a plethora of pass rushers to bring in Lock as their future #1 quarterback. With Alex Smith likely out for the season and Case Keenum and Colt McCoy projected to start, they need to address this spot.

16) Carolina Panthers: Montez Sweat (DE, Mississippi State) — There are some some offensive linemen that should intrigue Carolina here, but the edge rush just isn’t good enough — especially with Julius Peppers in retirement so assuming his medical concerns aren’t too big, Carolina goes with Sweat and can address their offensive line need in Round 2.

17) New York Giants: Daniel Jones (QB, Duke) — Finally, the Giants go with a quarterback. Through his college coach David Cutcliffe, Jones has an established relationship with the Manning family which makes him a good transition plan to the the Giants. Jones’ play on tape has drawn a lot of mixed reviews, but early rumor is the Giants have him as the top QB on their board.

18) Minnesota Vikings: Garrett Bradbury (C, North Carolina State) — With the top tackles off the board, Minnesota upgrades their offensive line by upgrading two spots. Drafting Bradbury at centre allows Pat Elflein to shift over to guard, where he’d immediately start. NFL Network’s Daniel Jeremiah is a massive fan of Bradbury.

20) Pittsburgh Steelers: Greedy Williams (CB, LSU) — The Steelers could pick a receiver to replace Antonio Brown, but historically they’ve had success finding them in the middle rounds. Pittsburgh struck out on Artie Burns and still need to upgrade their secondary. If Williams is off the board, Rock Ya-Sin is a name to watch here.

21) Seattle Seahawks: Brian Burns (EDGE, Florida State) — If this scenario unfolds, Schneider should resist the urge to trade down and turn the card immediately. Burns is a nasty speed rusher off the edge, who reminds some of Cliff Avril at the LEO spot, and would go a long way in the post Frank Clark solution at the position. Burns could be a Day 1 starter for Seattle and allow the team to fill their next biggest needs with their upcoming two picks.

22) Baltimore Ravens: D.K. Metcalf (WR, Ole Miss) — One thing I noticed in studying depth charts for this exercise is how scary thin the Ravens are at wide receiver. They’re going to run a lot, but still need help at receiver. Metcalf is an absolute physical specimen that can win at the point of attack, but lacks much of a route tree, which actually makes him a potentially decent fit for Lamar Jackson.

23) Houston Texans: Cody Ford (OL, Oklahoma) — The Texans are an obvious candidate to move up because their offensive line brings back scary flashbacks off the Tom Cable Seahawks. Ford, however, would be a good pick for them. He got a first-round grade from Pro Football Focus and is a powerful, versatile lineman that has experience playing at least three different spots.

24) Oakland Raiders (via Chicago) : Josh Jacobs (RB, Alabama) — With Marshawn Lynch expected to retire, the Raiders still have a major hole at running back, and Jon Gruden is absolutely obsessed with adding offensive talent and ignoring his defensive personnel. Jacobs is one of the cleaner prospects as well, which is why I can see Mike Mayock signing off on this selection.

25) Philadelphia Eagles: Clelin Ferrell (DE, Clemson) —  The Eagles could go safety here, but because their roster is in such good shape, they can go with the top player on their board and ignore need, and Tillery fits the kind of players the Eagles like to bring on the defensive line, and add some more depth after dealing away Michael Bennett in the off-season. They signed Malik Jackson but he’s still an aging player.

26) Indianapolis Colts: Jeffery Simmons (DL, Mississippi State ) —   The Colts have built up such a solid roster that they’re able to take this kind of flier and redshirt Simmons, a top-five talent coming off an ACL injury. Simmons is considered by Mike Lombardi to be the best overall talent in this draft class. The Seahawks could consider him at No. 21.2

27) Oakland Raiders (via Dallas): Byron Murphy (CB, Washington) —  Murphy is a tough and physical playmaker on the back end, which the Raiders badly need after the previous regime wasted a lot of draft capital in their secondary. The UW product should start right away in Oakland.

28) Los Angeles Chargers: Jerry Tillery (DL, Notre Dame) — Brandon Mebane is getting up their age, Derrius Philon left in free agency and Corey Luiget was not brought back, so the Chargers need to address their need on their defensive line, and Tillery is a good fit that can play multiple spots in Gus Bradley’s defense.

29) Seattle Seahawks: N’Keal Harry (WR, Arizona) — With lots of receivers and safeties still on the board, Seattle should likely swap down from here and try and add another Day 2 pick, but the Seahawks decide to buck their usual trends and pick the receiver of their choice to make sure they stay in front of Arizona/SF who both want to add receivers high in Round 2. Harry is a big receiver that can run and provides depth with Doug Baldwin’s future uncertain.

30) Green Bay Packers: Taylor Rapp (SS, Washington) — Rapp’s stock dropped a bit with his 40 time, but the Packers are an old-school organization that places more emphasis on film, so Rapp provides them a physical safety that can help cover tight ends in space and pairs well with all the corners they added in recent drafts.

31) Los Angeles Rams: Dexter Lawrence (DL, Clemson) — Lawrence isn’t a great penetrating lineman like some of his college teammates. He is more of a space eater, which pairs nicely with Aaron Donald and help shore a run defence that was torched by Seattle twice last season. Rashaad Penny does not support this pick. Maybe they should take a QB instead.

32) New England Patriots: Irv Smith (TE, Alabama) — Predicting what New England will do in the draft is more challenging than figuring out the nuclear codes, but using logic and rationale, Belichick loves Alabama players and has a large hole to replace at tight end with Rob Gronkowski’s retirement. Smith is no Gronk but he can be a solid starter that can contribute both as a pass catcher and a blocker in the run game.J