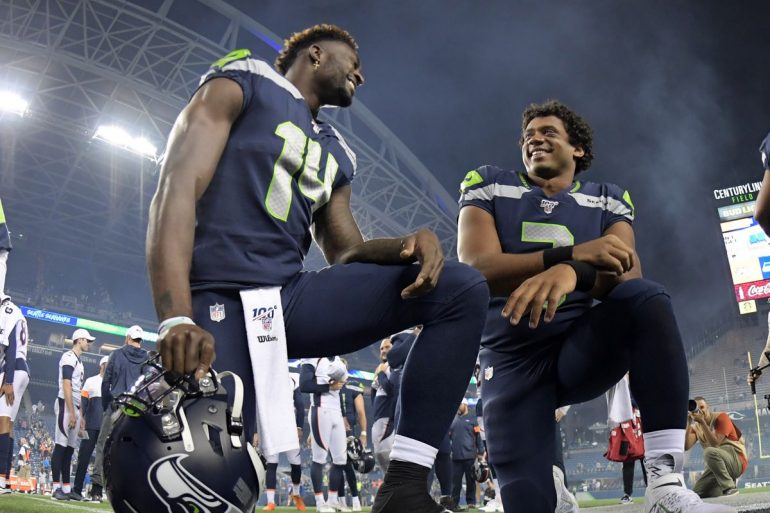 6 Questions On My Mind as Seahawks Open 2019 Season

The NFL season is rolling series of call-and-response challenges for each player, coach, and team. It begins in the offseason with questions of how a front office, coaching staff, and players will respond to the previous season. What will be the positional priorities? How will the draft, free agency, and trades be utilized? It then rolls into training camp where we learn which players put in the work to improve, which new acquisitions look promising, and what scheme adjustments have been made. Preseason games help us learn who is ready for a larger role and who will make up the roster. But all of that amounts to the preface of the novel that is the regular season. This Seattle team has questions that will only start to be answered once the ball is kicked off today at 1:05PM Pacific Time. These are a few that are on my mind.

#1 – What is the defensive end rotation?

The Seahawks traded for Jadeveon Clowney and signed Ezekiel Ansah this offseason. They cut Cassius Marsh, and traded away Jacob Martin. The first part of this riddle will be answered when we see who steps on the field to start the game.

The reason being that Ansah seems to be the bigger health question and the team can limit his snaps by picking subpackages he can play in. This also gets their three best defensive ends into rotation as Jefferson was the projected starter at 5T before the Clowney deal.

I would expect to see Branden Jackson give Ansah a break as well.

The forgotten man since the Clowney deal, Ansah was the big ticket addition to the defensive line. I find myself with low expectations for what he will be this year, and am eager to see how he looks even in limited snaps in his first game back from injury.

#3 – Is the secondary a weakness on a strong team or an Achilles heel that prevents this team from competing?

There are questions at every single position in the secondary. Yes, even Bradley McDougald is coming off a knee injury and played his best football last season. We do not know if that is the new normal for him or we have seen his best football.

Shaquill Griffin took a step back last year and needs to at least reestablish that he can keep the ball in front of him with fewer explosive plays.

Tre Flowers enters his second season ever as a cornerback and has yet to make an interception.

Akeem King likely starts the day as the nickel corner, but he could be unseated as early as next week by either Perry Nickerson or Ugo Amadi.

Tedric Thompson seems the like the surest thing in the secondary, and that is because he is almost certainly a below average starter.

Even the third string safety is unclear. Will Marquise Blair or Lano Hill be the first safety off the bench?

Even for what seems like a doom and gloom assessment of this group, the question I keep asking is whether they are worse than the offensive lines of the Super Bowl teams, or the offense, in general, of those teams.

People forget how many times the offense scuffled in those years and the defense had to keep them in the game. The offensive line, in particular, was awful at times and made competing incredibly difficult.

The point is that all teams, even champions, have weaknesses. Is this secondary a weakness that the offense and other aspects of the defense can overcome, or is it so bad the team has a much lower ceiling than we want to admit?

I am super curious to see what the targets breakdown will be among just the wide receivers, and then expanded out to all receiving targets, including tight ends and backs.

We know Tyler Lockett is the top target. It feels more and more likely that D.K. Metcalf could be second on the list for receivers, but Jaron Brown could push him to third.

Will Dissly gives the team a dangerous receiving threat at tight end for the first time in nearly a year. We know the team wants to involves their backs more in the passing game, so Chris Carson could get a heavy dose of targets.

There have been seasons in the past where it was very frustrating when the team did not get the ball to their best players in the passing game. This season sets up differently. It feels far more natural that Russell Wilson will move the ball around to the best option instead of feeling the need to involve specific players.

#5 – Was I just imagining the increase use of crossing routes in the passing game?

One observation I had during training camp and preseason was that the offense appeared to be including more crossing routes in front of the QB compared to past years where most routes appeared to be vertical. This primarily seemed to be to tight ends, but receivers were doing them as well deeper downfield.

Wilson looked very confident throwing from right-to-left on those plays. I’m eager to see if those show up more.

#6 – Will there be a two or three person rotation at running back?

We all saw C.J. Prosise showcase his talent in the final two weeks of the preseason to earn a roster spot. What we do not know is whether he will see the field this week or even be on the active roster.

Carson is set to get more snaps in more situations than a year ago. A big part of how he will get the 50 pass targets the coaches talked about was gobbling up a bunch of the 42 targets Mike Davis had last year as the third down back.

The team needs to be wise about his health, so we know Rashaad Penny will sub for him every few series. What we do not know is whether they will have a dedicated third down back or two minute drill back as they have in the past, and if they do, who will take those duties.

Prosise is the ideal player for those roles. It would be a thrill to see him get snaps, but it would not surprise me to see him inactive.

We are hours away from starting to get answers to these questions and more. Welcome to the 2019 season!