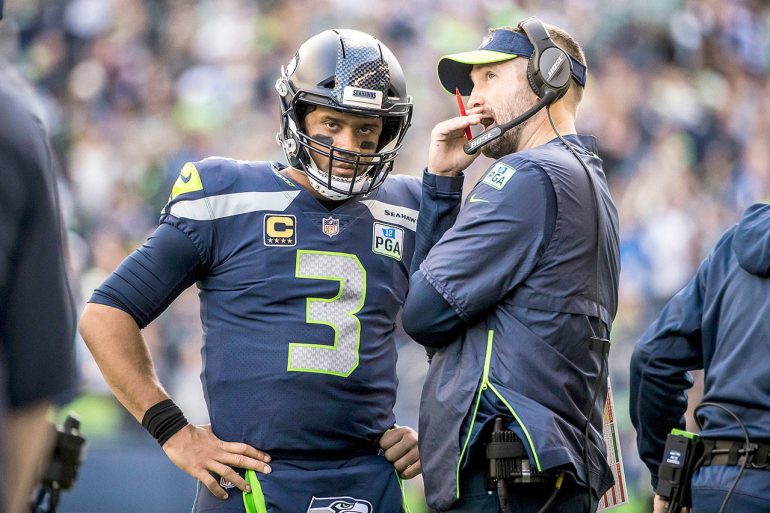 Speeding Up the Passing Game

Against Pittsburgh in week 2, Russell Wilson was getting the ball out as fast as we’ve ever seen.

There’s a lot that’s impressive about this. First is that Wilson still managed to throw for 8.5 yards per attempt. For reference, Russ’ highest yards per attempt for any season in his career is 8.3. Typically you would expect a decrease in time to throw to go hand in hand with shorter passing, but Wilson and Schotty found a way in this game to avoid that trade off.

The next thing that’s impressive about this is just how big of a shift this is from how Russell has played in the past. It’s no secret that Russell holds on to the ball longer than almost all other QBs. Per Pro Football Focus:

Against Pittsburg, Russell was getting the ball out a full second faster than he’s done over most of his career. It was, as noted by Keegan in the tweet above, the fastest average time to throw for any QB since 2016 per Next Gen Stats. It’s a massive swing, but it’s also just one game. So how predictive do we think this is for the rest of the season?

In week 1 against Cincinnati, Wilson’s time to throw (according to PFF) was 2.72 seconds. While that’s a tick faster than his career averages, it still put him at 7th highest in the league for the first week of the season. So does that mean week 2 was just a fluke?

Well, yes. Week 2 was almost certainly a fluke as there’s no reason to expect him to continue to put up sub-2 second time to throws. For reference, the lowest average time to throw since 2012 was Andy Dalton’s 2.21 seconds in 2015. So we shouldn’t expect this kind of performance from Wilson every week.

That said, there was some indication in week 1 that the offense was speeding up. While the overall time to throw wasn’t particularly different from the rest of his career, the percentage of drop backs where Wilson got the ball out in under 2.5 seconds was significantly better than previous seasons.

If Wilson can simply maintain his week 1 rate of passes within 2.5 seconds he should find himself among the top rates in the league. In 2018, his 54.2% would have ranked as tied for the 10th fastest in the league.

There’s a lot of history pointing to this being more of an aberration than a new trend for Wilson. It would be a massive evolution of Russ’ game to go from perennially in the bottom 6 of time to throw to the top 10 over a single offseason. But swings like this don’t happen by accident. Through two weeks it seems clear that Seattle has modified how they’re trying to pass, and the early returns have been very positive. He may not continue to lead the league, but fans can probably expect to see a sped up passing game.