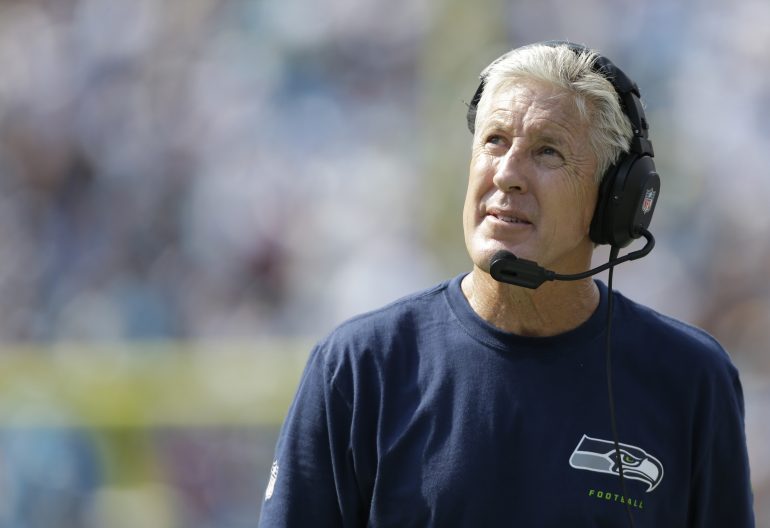 The Seahawks are cowards on fourth down. And I’m sick of it.

The Seahawks are 5-2. But for some reason, it sure doesn’t feel like it. Oddly enough I wasn’t that upset after Sunday’s loss to the Ravens. I felt the Seahawks were both outplayed and outcoached. But Pete’s interview on 710 this morning infuriated me.

I want to preface this article by noting several things, hopefully denying the opportunity for hateful comments:

With that said, each week we’ve watched as the Seahawks have continued to play conservative football to a fault — making late down decisions so mind-numbingly stupid (mostly on 4th down) that make me want to throw my 65 inch LG television off the patio. Believe me, I understand football can be frustrating. It’s not often a sport of black and white decision-making. There’s a whole lot of gray area. But this isn’t one of those times.

The Seahawks are cowards on fourth down. And here are four reasons why.

For a team that believes in the sanctity of “body blows”, “establishing the run”, and “pushing a mother******* a** off the line”, Seattle’s 4th down decision making reeks of cowardice. Let’s pretend for a moment that all of the running beliefs previously mentioned matter and are true. It is incredibly cowardly and fearful to refuse to run the ball down the opponents’ throat on fourth and short.

If you want to be a running football team, that is the time to run. That is the time to establish physicality and dominance over an opponent. That is the time to say: “We’re going to run the ball. Try and stop us. You won’t.” But the Seahawks don’t do that. Instead, they’re cowards and they punt the ball or kick an unreasonably long field goal in enemy territory. Instead, they turn the ball over to gain 20 yards of field position. For a team that prides itself on physical dominance, their fourth-down decision making starkly contradicts their supposed identity.

The defense is not elite (or even good!)

The Seahawks’ conservative offensive approach is not a new thing. And frankly, there wasn’t a ton of backlash against this approach several years ago. Why? Because the Seahawks had one of the greatest defenses in NFL history for four consecutive years. The Legion of Boom could overcome many coaching failures and offensive cowardice.

But now? Not so much. These Seahawks don’t have a Legion of Boom level defense. In fact, they’re not even average. They’re below average. Here’s how they rank defensively:

(or kicking a very long field goal) on fourth and short in enemy territory would still be a cowardly decision. But at least I would understand it a bit more.

Analytics are clear: go for it

There’s been extensive, indisputable research clarifying the immense value from being aggressive on fourth down. Ben Baldwin, a columnist at The Athletic Seattle, wrote a fantastic article on the consequences of fourth-down decision making.

“We have known this for more than a decade: David Romer, an economics professor at UC Berkeley, released a paper examining fourth-down decision-making in 2006. A new paper released earlier this year showed that the average team costs itself about a half-win per year by being too conservative on fourth down.

It’s easy to find information about when teams should go for it on fourth down. The New York Times created a bot that tells teams whether they should go for it based on field position and yards to go using their expected points model, and even published a simple chart showing when the bot recommends going for it.”

As a general rule, data scientists suggest the following:

Not only are the analytics clear that going for it more often than not is the correct decision (*especially* in opponent territory), Russell Wilson has proven to be very good at converting fourth downs. Go for it!

Choosing not to trust Russell Wilson

I genuinely do not care what the logic is behind choosing to punt (or kick a very, very long field goal) in enemy territory. I do not care. I don’t care if the argument is that the defense is elite or if the god of big steak burritos told you to, you are subconsciously choosing not to trust Russell Wilson.

Russell Wilson is the league’s MVP frontrunner. He is playing out of his mind behind a very bad offensive line. On Sunday, the Ravens trusted Lamar Jackson more than the Seahawks trusted Wilson. Even if it wasn’t intentional, it was a subconscious decision. And that is sad.

And before you retort with NFL coaches “know more” than the average fan? No, they don’t always do. The Baltimore Ravens literally hired a dude off twitter (well known in Seahawks fan circles) to conduct modern data research and interpret analytics in hopes of increasing their chances of winning. And the Ravens did just that, by following Sean’s advice to go for it on fourth down.

Stop being cowardly. I’m sick of it.