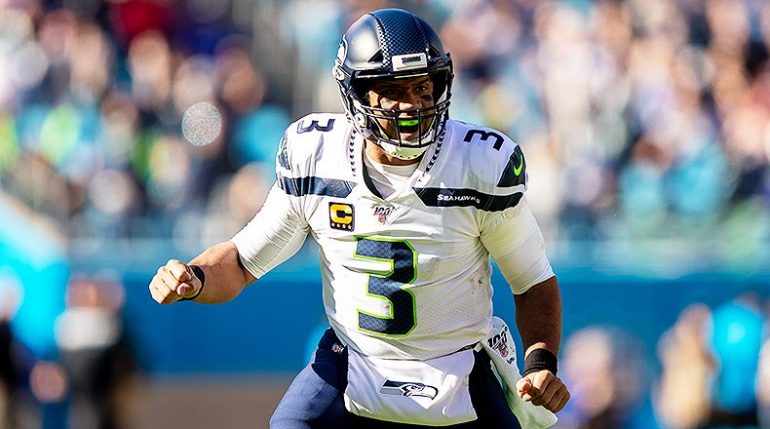 People wanted to declare Russell Wilson a field general in 2015. After week 2 of this 2020, I can say without reservation that, Russell Wilson is a field general. The strange thing about analyzing football and loving football history is that it can sometimes cross wires in your brain. This last Sunday we were all pumped up by D.K. Metcalf’s big 54-yard touchdown. A touchdown mind you, that beat the 2019 defensive player of the year, Stephon Gilmore. I was talking about it like you all were. It was D.K.’s final catch that stuck in my mind though.

The route was a simple stop at the sticks. (He was slightly short.) but it showed a veteran savvy that few second year players have. My brain wound this up and I excitedly thought about how to explain why it was cool. I was all prepared to talk about how the hand jab at the top of the route reminded me of Anquan Boldin’s entire career. Then, words that Matt Hasselbeck once spoke near the end of 2010 popped in my head. They gnawed at me.

I became obsessed with learning more about how the Seahawks worked in 2003-2005. These were some of the best years offensively in Seattle’s entire history. I wanted to learn how option routes worked, QB mechanics, how running backs read blocks and defenses. You name it, I dug into everything about that period of time. It’s why my tweets constantly go back to that time when talking about offense. This was peak performance, to me anyway.

So why did Matt Hasselbeck’s words hit me so hard? It’s what followed them that suddenly clicked everything into place for me. Paraphasing a bit:

“You just have to buy in.” When asked to explain what he meant he explained. “When you run a play you have to believe in every aspect of it.” Everyone has to buy in. “When I came to Seattle, we ran this play, I won’t give specifics here, but everyone in football runs a version of this play. Like it’s on page one of every single playbook.”

“When I came here to Seattle from Green Bay, I thought I knew how this play should work. The coaches, they’re like; ‘we do things differently here. And I just fought and fought because I thought it was dumb how we ran it. When I finally stopped and just did what I was asked, I found that they (the coaches) were right. I mean, I was fighting on small things like read progressions or thinking route depths were dumb.”

“When I bought in finally, I learned to love this play. I thought we ran it better than anybody else. It wasn’t that big of a deal (The differences in the play) but I had to believe in the play, set my ego aside and do what the coaches wanted. Once I did that, everything clicked. It was so easy after that.”

A simple swing pass to the running back. This is when I noticed Russell Wilson buying in. A dump off pass to a back out of the backfield is usually an outlet and by design it is typically a third or fourth read on the play and usually it’s there if the other parts of your play get covered up. It’s simple. It’s easy. However, young QBs often hang on to a play too long, And the outlet becomes less effective.

Russell Wilson’s scrambling off platform plays made him an early success, but eventually he was only doing that. Whether it was because of the o-line or poor plays I don’t know. At some point, Russell only seemed capable as a passer later in games. Many first halves would be like 5-of-11 or 6-of 14. Never mind the scrambles and sacks that don’t register as incompletions.

Since Brian Schottenheimer has been here Russell has been processing the field differently and when the play isn’t there, he doesn’t hang on to it. He throws to his outlet. This has made him more effective earlier in games. Seattle has seen a major uptick in first-half scoring since the new coordinator everyone hates got here.

Like it or not, Field General Russell Wilson has bought in. And his teammates are buying in too.

It Sounds Too Simplistic

It sounds so simple. There’s no way what we’re seeing now is because of that. This whole article is dumb. I hate it. I understand. Let me explain it another way, using a baseball analogy; Russell Wilson is at bat in a 3-0 count with the bases loaded. If he doesn’t like the pitch, he takes it, instead of swinging for the fences because it’s a 3-0 count.

By taking this pitch, he scores a run by walking or hopefully gets a better pitch on 3-1. In football terms, he’s letting the play develop the way it’s meant to and then saying “Okay, let’s wait and get something else.” Rather than doing his run around and hope Doug Baldwin or Tyler Lockett finds me.

With the information you collect from that dump off you can:

-See how the defense chose to defend you.
-protect your O-line from becoming worn down by having to block for 8-9 seconds. Now they can read their keys and play properly
-Force the defense to account for the outlet pass by moving a defender closer to the line of scrimmage.
-Take your free yards

Probably the most important of this set of points is for you to get a look at the defensive approach. Now you can adjust small things such as the timing of a route or how the QB may process the play (Change the order of first read, second read, etc.

I’ve seen the biggest plays happen because a receiver recognized that a defender was playing him with outside leverage. They changed the direction of the route from the sideline to the middle of the field. Same play everywhere else. And ended up with a key conversion on a 3rd and 7.

The second most important is ‘Take your free yards’ If you get 5-7 yards on an outlet pass you’re going to have many more options of things you can call. The things we saw Russell do On SNF was throw to his back and then run when the Patriots played man coverage. All those yards were free. You didn’t have to challenge more than one defender and the chains moved at a brisk pace.

We can talk about, motions, audibles and be all complicated, but it’s all about this. It’s realizing when they got you and living to fight another down.
Field General Russell Wilson is not afraid to take his free yards. Because of that, he helped his team win the battle.

So after all this layout, why did Metcalf’s final catch lead me on this journey? Because I remember last year when D.K. made big plays but sometimes looked like he was trying to keep his head above water. That 10-yard stop route was a sign of confidence and execution. It was a simple adjustment to Gilmore squatting on the comeback route after 10-yards 3 different times.

Really? That’s it? All this long article for a small paragraph at the end?
Since you’re asking questions, let me ask you one. How many second year receivers do you know having Metcalf’s success? Now consider that he was playing last year’s defensive player of the year.

As Field General Russell Wilson overlooks the field, he has faith in himself and his team. His teammates have faith in him and that’s reflected in how smooth everything has looked for the last two-weeks. That last catch by Metcalf? says “I’m coming for the rest of the NFL and this kid is coming with me. ”