Tale of the Tape: Seahawks Renew Rivalry with Rising 49ers 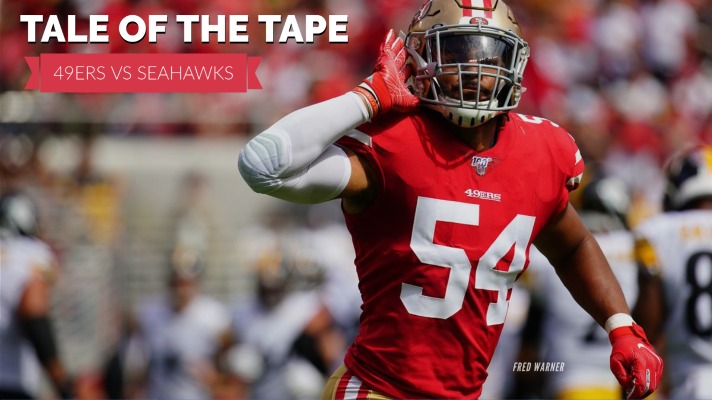 If there is a rivalry in today’s NFL that has as much bad blood as the Seahawks vs the 49ers, I do not know of it. The teams may not feel it, but the fans certainly do. There is no team I take more pleasure in beating than the 49ers. The feeling appears to be mutual on the other side.

This year we will not be able to impact the game in the stands, and instead be left to cajole the team cosmically through our TVs.

San Francisco enters the game in a perplexing state. They are more injured than any team in the league, losing two more key starters this past week. They had one of the easiest opening schedules in the league, but started with a losing record. They had their two toughest tests the past two weeks, and played splendidly in beating the Rams and Patriots to get back over .500.

Seattle, meanwhile, is coming off not only their first lost of the season, but a particularly painful one. Their offense continues to be the best in football, while their defense is one of the worst. A big question mark this week is whether they get their best defensive player back on the field in Jamal Adams and do they add a monster in the middle with Damon Harrison. There is also some question as to the availability of Shaquill Griffin.

It is easier to picture the 49ers defense slowing the Seahawks offense than the Seahawks defense rising up against Kyle Shanahan’s offense. The loss of Deebo Samuel, though, is significant. San Francisco has employed a heavy reliance on stretching the field horizontally over these past two games. There are lots of jet sweeps and screens and short passes.

This has helped to combat some pass protection issues and poor play from the quarterback position. I am curious to see if that approach actually plays to the Seahawks advantage. Seattle has largely struggled with being beat deep. They have been good-to-excellent in defending screens and jet sweeps. If Seattle can get Jimmy Garoppolo throwing farther downfield, that could be a recipe for more turnovers from the defense leading the league in that category (it’s true).

This is one of the most difficult matchups to assess for Seattle this season. The Seahawks offense has been impossible to defend over a full game so far this year. I like their chances against anyone. This could very well come down to whether Adams and Griffin play to help make enough plays to hold down the 49ers.

Fred Warner is the best linebacker in football. He is everywhere on the field. Jason Verrett has been one of the best corners in football this season. Arik Armstead is a handful on the defensive line. Kerry Hyder has been excellent opposite Armstead.

The 49ers are without Richard Sherman, Nick Bosa, Kwon Alexander, Dee Ford, Jaquiski Tartt, and Jimmie Ward. They are still a handful. That is how stacked this defense was heading into this season, and they also had DeForest Buckner last year.

Yet, the Seahawks put up 27 and 21 points last year despite a far inferior offense with more missing players. This version of the 49ers will feel good about their ability to matchup with D.K. Metcalf and Tyler Lockett. They will also like their chances in defending the run, especially if both Chris Carson and Carlos Hyde are out with injuries.

The one thing the 49ers will never feel good about is facing Russell Wilson. He has found a variety of ways to beat them. They should expect his best effort coming off a game he took personal responsibility for losing due to his interceptions.

He may get an even larger share of the offensive load with the state of the running back position. Seattle may suit up a receiver like Penny Hart or David Moore at running back depending on how many of their current backs are able to play.

DeeJay Dallas struggled mightily in pass protection against the Cardinals, but could benefit from a full week of practice and has big play potential with very little tape for the 49ers to use for preparation.

Seattle’s offensive line has been excellent this season, and should have an advantage against a 49ers defense that has struggled to generate pressure. San Francisco likes to play a lot of man defense that could leave them vulnerable to QB scrambles. Kyler Murray gave them a ton of trouble in the first week, as did Ryan Fitzpatrick.

Shanahan is the biggest advantage. He will scheme circles around Ken Norton Jr. Tackling became a problem against Arizona and would be a major issue if Seattle is not sound in their approach this week.

The 49ers will isolate their players on Seattle defenders time and again, and if the tackle is not made, explosive yards after catch will follow.

George Kittle is always a tough matchup, and will be the focal point with Samuel on the sideline. Brandon Aiyuk has been a great addition, and will see a lot of Samuel’s targets.

Kyle Juszczyk is one guy to keep an eye on as his ability to find open space as a receiver poses a serious issue for the Seahawks.

JaMycal Hasty likely steps in at running back, and is a guy they like a lot.

Center Ben Garland went on IR last week and his replacement, Hroniss Grasu, was awful last week. Right guard Daniel Brunskill has not been good all year. Should Harrison play, he may have a chance to cause significant disruption in the interior of the 49ers line.

That is one of the biggest wildcards in this game. Nobody knows what to expect from Harrison. Not even Seattle. If he is even 75% of the player he was two years ago, it will be a major boost for the linebacker corps behind him.

If you can stop the 49ers run game, which is no easy task, San Francisco becomes far less comfortable. Seattle did an excellent job of that last season. No 49er running back had more than 57 yards in a game against the Seahawks. That was a huge part of why those games were close despite the massive talent disparity between the two rosters.

Unlike Sean McVay, Shanahan’s offenses have had a tougher time against Carroll’s defenses.

Adams is absolutely crucial in this game. His ability to read and react near the line of scrimmage is exactly what Seattle needs against this style of offense. If he is not there again, the game gets that much tougher.

Seattle should enjoy a field position advantage if they can get the 49ers to punt the ball.