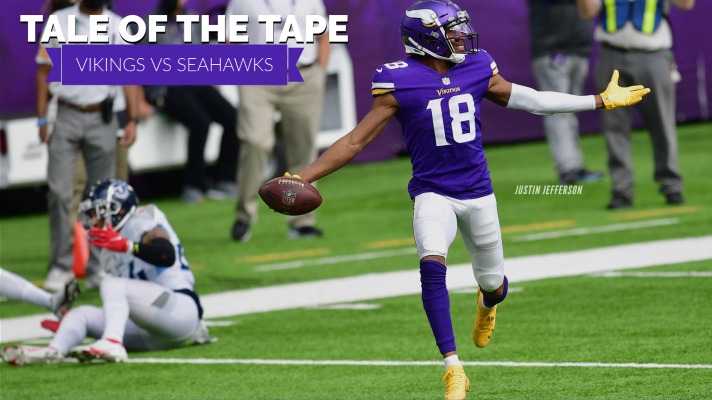 Tale of the Tape: Vikings a Dangerous, Flawed Opponent

I’ll admit it. My heart sank when the news broke the former Jaguars defensive end Yannick Ngakoue had been traded. Not because he was a player I had wanted the Seahawks to draft years ago or even trade for this offseason. The sinking feeling came from imagining how good the Minnesota Vikings defense could be with him on one side of the line and Danielle Hunter on the other, along with Anthony Barr behind them.

Well, Hunter has unfortunately been injured, and may miss the entire season. Barr was lost early on to a torn pectoral muscle for the year.

The less-than-dominant front seven has left a young group of corners even more exposed. Their schedule has not helped, as they have played three of the best teams in football in the first four weeks, and will play another on Sunday. Their easiest opponent still had DeShaun Watson at the helm.

Hidden behind their surprising 1-3 record is an offense that has scored 30+ points in three of their four games. The only game they failed to reach that point was against the Indianapolis Colts, who own the best defense in the NFL so far.

People like to clown on Kirk Cousins, but he is a middling driver behind the wheel of a Ferrari. He can be average and still win plenty of races when he is throwing to Adam Thielen and Justin Jefferson (the #1 and #2 graded receiver in the NFL by Pro Football Focus) and handing off to Dalvin Cook (the NFL’s leading rusher).

This is the most dangerous 1-3 team in the NFL. Many will look at the quarterbacks or the records or the location of the game (or even the time of the game considering Cousins’ record on prime time), and assume this is a clear win for Seattle.

I see something different. Minnesota just got their first victory and are likely looking at this as their chance to get back in the NFC race. They will have no fear of the Seattle defense that will still be missing key players, and the Seahawks could relax just a bit with the upcoming bye.

Seattle needs to avoid complacency and play another terrific offensive game to win on Sunday. The intangible aspects of this matchup concern me.

Ngakoue has three sacks and 10 pressures through four games. Ifeadi Odenigbo is a lesser known edge rusher who has 12 pressures of his own. They will go up against what has been a good-but-not-great tackle duo of Duane Brown and Brandon Shell.

Brown has given up some uncharacteristic sacks the past few weeks. Seattle also chose to rotate Shell out last weekend and the Dolphins were able to beat his backup for key sack.

Harrison Smith is still a great safety. Anthony Harris has not been as good this year, but is still excellent. Linebacker Eric Kendricks is a terrific tackler and solid playmaker.

That combination of veteran talent and solid edge rush has made the Vikings one of the best situation defenses in football, ranking 2nd in 3rd down and red zone defense.

The Seahawks lone offensive weakness has been performance on third down. Continuing their success on early downs will be key.

You can read the chart. The Vikings pass defense has been awful. They have been playing Holton Hill and Jeff Gladney as their starting corners, with Gladney sliding inside to slot corner in nickel situations and Cameron Dantzler playing outside.

Those corners rank 94th, 71st, and 55th (out of 102 corners) in PFF cornerback grades, respectively. If you focus just on coverage grades, Hill slides to 95th and Gladney to 81st.

Hill has been roughly equivalent to Tre Flowers. This is a game where a technician like Tyler Lockett should have a field day.

The Vikings rank 27th in defending opposing #1 receivers, 13th in #2 receivers, 30th in all other receivers, 18th in tight ends and 8th in running backs (as pass catchers).

David Moore would seem to have a chance to make an impact on this game, as would possibly Freddie Swain.

The Vikings have also been terrible in defending the run. Linval Joseph is gone. All they have is Jaleel Johnson and Shamar Stephen inside. They have allowed 130+ yards rushing in all but one game, and 150+ in two.

This is a game where longer possessions could prove useful in slowing down a potent Vikings offense.

Take a look at that yards per play, and their ranks in explosives. This offense can score quickly, and will challenge a Seahawks defense that has had trouble giving up the big play.

Seattle is still a distant last in surrendering explosive passes with 41 on the year. Thielen and Jefferson have to feel pretty confident in their chances, especially if Quinton Dunbar remains on the sideline for a third week.

This will be the biggest test so far for Ryan Neal as a starter.

The Vikings also have a good tight end in Kyle Rudolph. It will be interesting to see if Shaquem Griffin gets more snaps at linebacker this week as he has clearly outperformed Cody Barton.

Cook is an outstanding runner, but that is not where the Vikings appear to have their biggest advantage.

Seattle’s stout run defense may finally be a key factor in a game. Minnesota has enjoyed a booming running attack in three of their four games. The one game they rushed for less than 130 yards (80 vs Indy) was the one game they scored less than 30 points (11).

The Seahawks have been stacking the middle and taking away a lot of interior rush lanes. Whether it is Griffin or Barton, you can expect the Vikings will try to attack the smaller Seahawks linebacker on outside runs.

The Vikings offensive line is also not very good. Benson Mayowa has finally started to produce some pressure, as evidenced by collecting 5 of his 10 pressures on the year in one game against Miami last weekend. This would be a good game for Alton Robinson or others to contribute more pressure.

The Seahawks would appear to have a significant advantage in special teams. Minnesota has missed two field goals already and their punt game is not good. Maybe Moore can break a long return in this one.