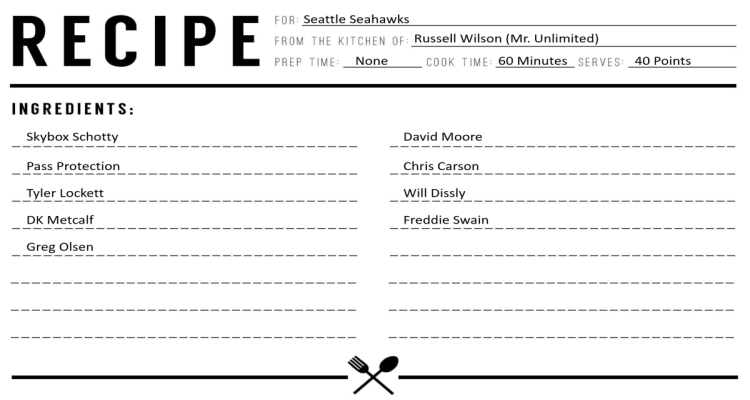 The story of “Let Russ Cook” begins with the 2018 season. The uncertainty heading into the season was at a level unseen in the Russell Wilson era. Turnover at both coordinator positions and heavy changes to the defensive personnel left fans and media tempering expectations. New coordinator Brian Schottenheimer had a penchant for running the football, which is perhaps the number one reason Pete Carroll brought him in.

The previous season featured a bad run game, forcing the Seahawks to rely more than ever on Russell Wilson. The poor running game, paired with an injury-riddled defense, led to the Seahawks missing the playoffs for the first time since 2011. Like it or not, Pete’s goal that offseason was to fix the run game.

Despite the frustration of analytically inclined fans, or fans who can’t stand close games, the renewed offense found success in 2018. In 2017, the Seahawks ranked 28th in expected points added (EPA) per rush attempt, in 2018 they jumped to 7th. They also improved their passing offense, moving from 13th in EPA per dropback, to 5th. Despite being the league’s most run heavy team, the offense was efficient. Since 2010, the 2018 Seahawks ranked as the fourth most run heavy team in neutral situations.

The Seahawks were able to sneak back into the playoffs that year, and a wild card match with the Cowboys felt winnable. Like much of the season, Brian Schottenheimer focused on running the ball, in this game though, it wasn’t working. Meanwhile, the pass game was working. On early downs (1st & 2nd), running the ball resulted in -0.26 EPA per rush, at just a 20% success rate, while passing resulted in 0.20 EPA per dropback and a 50% success rate.

In a playoff game, continuing to try and establish the run was a mistake. Russell was dealing, the run game was struggling, but Schottenheimer and Carroll wouldn’t hand the keys over to Russell Wilson. The Cowboys would go on to win the game, marking two consecutive years of not making the divisional round, after reaching it the previous five.

Following the game, there was frustration that the Seahawks were running too much, that the “establish the run” philosophy was outdated. This frustration was justified, despite being a successful rushing team in 2018, passing the ball was far more efficient. In the 2018 season, the Seahawks EPA per dropback was 0.21, the EPA per rush was -0.02. Success rate told the same story, 39% for rushing compared to 49% on dropbacks.

The traditional thinking is that running sets up 3rd & short, which is easier to convert. While it’s true that it’s easier to convert short-yardage, no distance is a guarantee. Once there’s more than three yards to go, less than half of 3rd downs are converted. Relying on a successful 3rd down offense is like relying on coin flips to keep landing on heads.

With the arrival of the 2019 season, there was little optimism the Seahawks would change their approach on offense. They got back to the playoffs on the back of, in their opinion, a strong run game and a physical identity. A sizable change occurred though, the Seahawks returned to the pack and passed 49.7% of the time in neutral situations, compared to 37.9% of the time in 2018.

The increase in passing though was not enough to push the offense further. The run game regressed, averaging -0.13 EPA per rush and a 39.8% success rate, compared to 0.12 EPA per dropback and 48.5% success rate. Thus, the “Let Russ Cook” era began. Season after season showed that Russell Wilson was a top tier quarterback, showed that the pass game, not the run game, was the way to move the team forward, that waiting until the fourth quarter to put the ball in his hands was unacceptable.

Coming into the 2020 season, there was a strange sense of optimism that this would be the year. Schotty, and more importantly Pete, was ready to hand the offense to Russ. Sure enough, in week one against the Falcons, with Schotty calling plays from the skybox, the Seahawks let Russ cook. In neutral situations, they passed the pall on 65.5% of plays, the highest rate since Schotty became offensive coordinator in 2018.

Now four weeks into the season, the offensive philosophy change seems real. In neutral situations, the Seahawks are passing at the highest rate in the league. The Kansas City Chiefs have been the king of passing for the last couple of seasons, but the Seahawks are even outpacing them this season at 60.7%.

Contrary to the beliefs that Russell would struggle if asked to pass too much, his efficiency is at an all-time high. Two of the most stable QB stats are EPA per play and completion percentage above expected (CPOE), Russ is excelling in both and indeed, cooking. Through four weeks, he is completing passes 13.2% more often than expected and is adding over 0.4 expected points every time he either drops back or runs.

Passing more was expected to move this offense into the elite group that can carry any team and put lots of points on the board. The Seahawks are averaging 35.5 points per game, a monumental step forward from 24.7 and 26.5 in 2019 and 2018, respectively. More importantly than what though, is how. The Seahawks are passing more than they ever have, but there’s more to the story.

A quick look back to early down conversion rate shows the effectiveness of early down passing, the Seahawks are facing a 3rd down on just 31% of their series. The chart below shows just how successful they’ve been at moving the chains (or scoring).

Offensive line play in Seattle has been a struggle for a while, especially in pass protection. Yet there’s been a remarkable improvement this season, ranking 17th per PFF Pass Block grade and 6th in ESPN’s Pass Block Win Rate. The improvement can be attributed to a couple factors, one being that they are simply better at pass blocking, but the other is that passing more on 1st and 2nd down leaves the defense uncertain. The defensive ends aren’t in pass rush only mode compared to 3rd and medium/long situations. Regardless, the pass blocking improvement needs to be highlighted.

With improved pass protection, Russell Wilson’s is able to hold the ball longer. His average time to throw is 3.02 seconds, 5th longest in the league. This long time to throw isn’t necessarily him waiting for longer routes to develop though. He is targeting the short area more frequently than previous seasons. In 2018 and 2019 Russell Wilson threw the ball seven yards or less on 54% of his passes, that number has shot up to 62% this season. The change is visible in the graph below, with the 2020 curve showing the highest peak in the short yardage area over the last three seasons.

Across the board Russell Wilson has been more accurate than ever as well. The biggest increase has been to his deep passing, from 40% (already a high number) to now 60%. While that will likely decrease with more volume, even a sizable decrease would keep him near the top of the league. Gains in the mid and short areas are more modest but certainly help with moving the sticks early and often.

The analytics crowd got their wish. Schotty is giving Russ the keys to the offense and the results have been as good as anyone could have hoped. Through four weeks, Russell Wilson has thrown for 15 touchdowns and shows little sign of slowing down. While he has had stretches like this in the past (second half of 2015), there appears to be a real difference this year. Better pass protection, a stud receiver in Tyler Lockett, an emerging star in DK Metcalf, and a play caller who seems hellbent on proving every doubter wrong, make for a unique situation that should allow Russell Wilson to continue to excel.