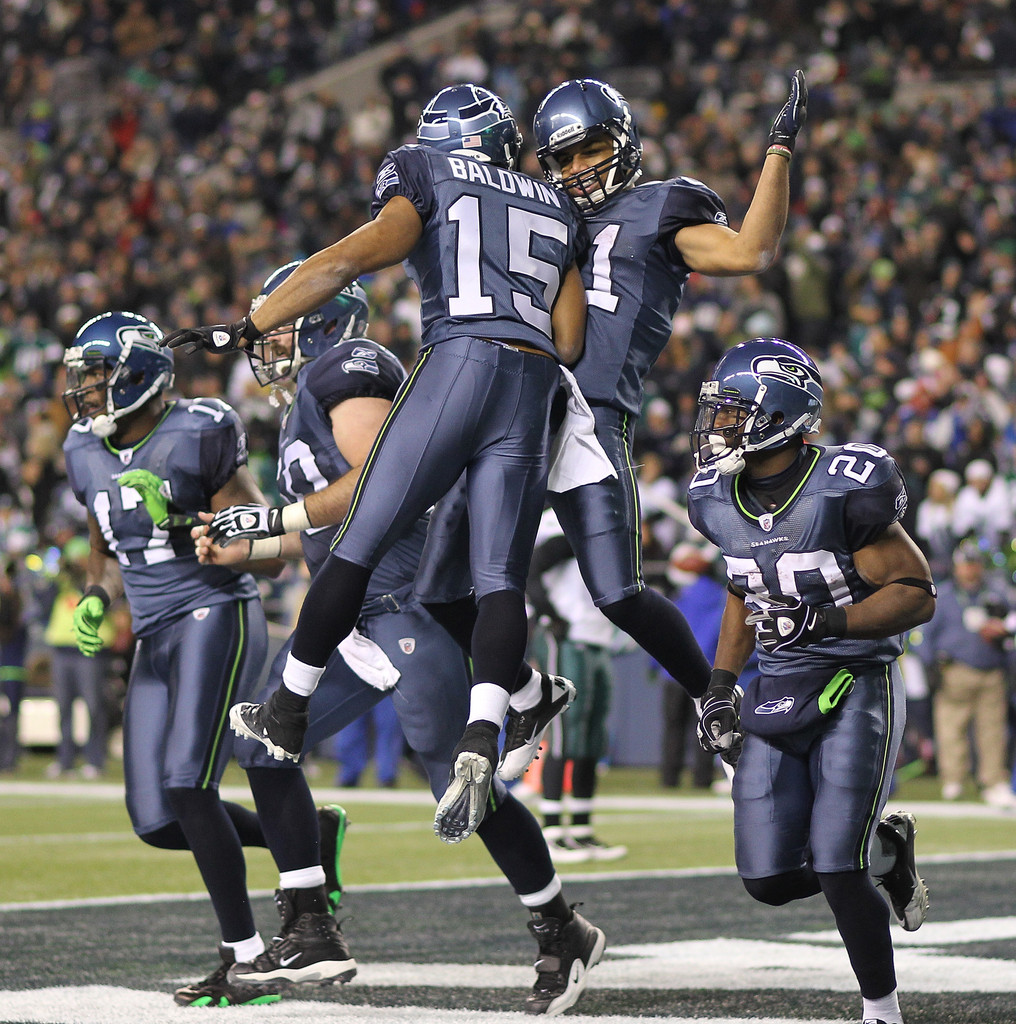 Seattle began training camp last season with a ton of talent. They already had a great secondary, a respected defense, and a promising pair of quarterbacks in Matt Flynn and Russell Wilson. They had added Bruce Irvin, Bobby Wagner and Jason Jones. Anyone that was paying attention could see the team was ready to make a large step forward. Yet, there was little national attention until they signed a player named Terrell Owens. The day Owens stepped onto the field for the first time, the amount of press covering the team grew five times over. Only, they were not really covering the team. They were covering Owens. Talking heads on various sports networks started talking about how Seattle might be a team ready to make a splash during the season with the addition of a player of Owens caliber. Ludicrous. Seattle went on to prove they were plenty ready to make a splash, and the national wonks and fans outside the Northwest were forced to learn to respect new names. Golden Tate had room to emerge into the dynamic playmaker he was made to be. Russell Wilson evolved from a short joke to a phenomenon. The team earned every accolade together. The 2012 season was not about one man.

Percy Harvin should not be mistaken for an over-the-hill receiver with money problems. His presence, though, brings some of the same misplaced credit, and his absence will create opportunity for new growth. The story of the Seattle Seahawks in 2013 with Harvin would have been something close to, “they were pretty good last year, but Harvin makes them great this year.” Consider the Seahawks story if they 10-2 or 9-3 by the time Harvin might return. Consider the space it provides Tate to grow further, for Doug Baldwin to re-establish his value, for Luke Willson and Sean McGrath to sneak up on people. This opens the door for Jermaine Kearse to become a player many of us did not think he could be, but that he continues to demonstrate in camp. It means a player like Stephen Williams, all 6’5″of him, could add a dimension the receiving corps lacked.

There is no credible case to be made for why this offense should take a step back this season. Any objective analysis would find far more reasons for it to improve, and they were already 9th in the NFL in scoring despite a knuckle-dragging 17.5 ppg in the first half of the 2012 season. Both guard spots on the line can only get better. James Carpenter is finally healthy. J.R. Sweezy was a rookie converted defensive lineman that earned a start in week one, and he is battling with John Moffitt who looks more determined than ever to regain his spot. Willson provides a speed dimension at tight end the team completely lacked a season ago. Baldwin is healthy and looks like a different player. Tate looks better. Marshawn Lynch now has two credible back-ups to share the load. And Wilson gets his first full off-season to study, prepare and improve.

Seattle’s offense was as dangerous as any in the NFL when they ended the 2012 season. Harvin’s addition was meant to keep Seattle one step ahead of defensive coordinators. He would add a unique dimension that must be accounted for on every play. He would create an unfair advantage that would sharpen the edge of every other weapon on offense. Or, at least, that was the idea.

Harvin is an unknown in Seattle. Football is not algebra. One plus one does not always equal two when it comes to personnel. There is some potential that Harvin’s presence would change the complexion of the offense in a bad way. A few old fans may remember Mike Holmgren’s first year in Seattle when Joey Galloway held out and Jon Kitna was forced to rely on Sean Dawkins and Derrick Mayes at receiver. The team miraculously went 6-2. Galloway came back for game nine, and the team proceeded to go 3-5 the rest of the way. The tendency is to always assume that adding great to great makes unbeatable. People need to acknowledge the possibility that Harvin may have actually complicated and slowed an offense that was just hitting its stride. Most will consider that insane spin doctoring, but the truth is nobody has seen Harvin play in Seattle, so there is no definitive truth.

What we do know is that it is very hard for a receiver to be central to a team’s success. Cold Hard Football Facts has done a great job exploring this, and have coined it The Shiny Hood Ornament Man Law. The basic gist is that evidence suggest receivers are complimentary, not foundational to championship teams, and that teams with very strong foundational parts (e.g., QB, offensive line) are far more likely to be champions with a mediocre receiving corps than vice versa. Seattle fans have seen this with a player like Matt Hasselbeck leading the team to multiple division titles and a Super Bowl appearance without the benefit of a single Pro Bowl receiver.

If you believe in Russell Wilson, Marshawn Lynch and this offensive line, today’s news falls in the range of disappointing, but far from devastating. I see reason to be excited about the opportunity this creates for players that appear ready to shine brighter, and for the team to once again surprise people with how dangerous it is even without a game-changer like Harvin. Should he be ready to rejoin the team late in the year, he will have to blend in. The offense will not form around him the way things seemed to be shaping up during OTAs. That may serve him and the team well. The 2013 Seahawks season will not be about one man. It never was.