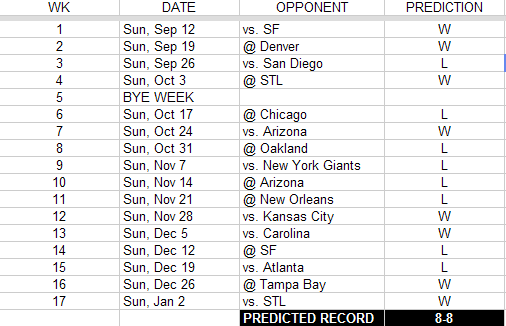 FINAL WORD
Fans hate it when a team starts the season with no hope of winning the Super Bowl, but I’m here to tell you there is hope. It’s just a different kind of hope. There is a rare batch of QB talent scheduled to be available in next year’s draft. It is unlikely the Seahawks will ever reach another Super Bowl with Matt at QB. Whitehurst may be the answer, but I wouldn’t bet the franchise on it. Even if the team decides to go a different direction and draft an impact pass rusher or another cornerstone offensive lineman, the best chance for this team to return to glory is to lose this year.  I have no interest in moral victory seasons that cost us a legitimate chance to be great. Even with that in mind, it’s hard to see how the Seahawks win fewer than seven games this year with such a fluffy schedule.

I’m looking forward to this season more than any one since 2005. These are the moments when you get to buy low as a fan, and watch the next generation of stars develop. Will Mike Williams be a Pro Bowler? Can Russell Okung lock down the left tackle spot? Is there a diamond in the rough we would never predict?  It won’t be long before we’re wringing our hands over these youngsters rookie contracts running out. Enjoy this season. Things only get better from here.