Pre-season predictions are always a crap shoot. Not only do you have to guess about how individual players will perform, how new schemes will pan out, and who will get injured, but you have to do the same with every opponent your team plays. Looking back at my predictions shows how you can be right and wrong at the same time. I foretold a 3-2 start for the Seahawks that most likely did not. Of course, I was only right about predicting the outcome of one game. That tends to undercut one’s credibility a tad, wouldn’t you say?

But now I am six weeks wiser, and emboldened about how I see the rest of the season unfolding. Nobody predicted a 1-5 start for San Francisco or a 3-3 start for St Louis. Few expected Oakland to look so much like they did last season. I certainly did not expect the Seahawks defense to emerge the way it has or for Marshawn Lynch to be added to the offensive bouillabaisse. Let’s take a look at how things were predicted pre-season, and my updated expectations: 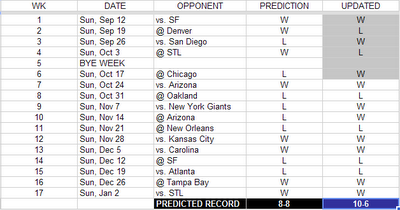 A 10-6 finish may seem optimistic to some. You may wonder if I have gotten swept away by the euphoria of the first meaningful road win since we had a working economy. Go through the schedule yourself. What results would you change? I see more potential for winning *more* than 10 games than I do for winning fewer. The games @Oakland and @Arizona are tough to forecast. Oakland might be a more likely win, but I’m not sure Seattle is consistent enough to win four games in a row. It is likely the Seahawks win in one of those away games. The Giants game will be tough, and Kansas City could be a trap game at home. However, the away game at SF and the home game against Atlanta could go in the Seahawks direction.

Football Outsiders formula for predicting win totals had the Seahawks winning 8.7 games before the Bears game this weekend. Given that the Seahawks best football should be in front of it with a weak schedule, it is not crazy to start thinking about 10+ wins. The cursor is blinking at me as I stare at that last sentence. Pete Carroll and John Schneider are magicians.

Tell me what you think. How do you see the season playing out?

UPDATE: Football Outsiders just revised their projections to include the Bears game, and they now have the Seahawks winning 9.6 games. Told you, bitches!!