[PA Announcer at Qwest]
Now introducing…your starting quarterback of the Seattle Seahawks. A man beloved in Seattle, and throughout the world. Number one, himself, David Hasselhoff!!

It’s been an amazing ride for Hasselhoff as the Seahawks starting quarterback. He first made a name for himself by being the only player in NFL history to insist on singing every national anthem before his team’s games. His awful singing caused every fan not of German descent to run screaming from Qwest Field at first, but people learned quickly, and brought ear plugs with them.

The league was unsure how to handle this new personality. They loved the increased popularity in Europe, but Commissioner Roger Goodell was concerned what example they were setting. Bad singing was one thing, but Hasselhoff’s decision to eschew league-mandated uniforms, and instead play topless, threatened to unravel a sport built on down-home values like violence and money. After weeks of deliberation, they decided Hasselhoff’s lack of jersey could be tolerated on two conditions. First, he would be the only player who could legally be hit helmet-to-helmet or after he released the ball, or even after the whistle was blown. Second, he was required to get an NFL logo tattooed on both pectorals. Hasselhoff agreed, and a star was born.

His line of Seahawks speedo briefs were an instant hit off the field. His ability to cause every play to snap into slow motion whenever he started running made him a hit on it. Defenses were powerless against his gleaming white teeth and stubborn refusal to ever…just…go…down…and…….stay down. They were merciless, and yet he still kept popping up. It was as if he had made a deal with the Devil. Everything he did was at once horrifyingly terrible and unfathomably successful.

Even his well-publicized rift with his daughter as he fought through alcoholism led to a lucrative endorsement deal for Carl’s Jr.

Cheeseburgers became the official Seahawks giveaway anytime Hasselhoff vomited on-field from a late hit or his spiked Gatorade. The team rarely won a game early on because Hasselhoff had absolutely no talent, but fans could not help but continue to tune in and sellout his games. Of course, his influence on the cheerleaders had a little something to do with that. Hall of Fame Sea Gal, Pamela Anderson passed up a chance at Hollywood to roam the sidelines of Seahawks games. She, and a bevy of other buxom beauties revolutionized cheer-leading with their risqué outfits and constant slow-motion running of laps around the field.

Only the smartest, most clever intellect could have hoped to keep this circus moving in the right direction. Luckily for the Seahawks, they had the smartest head coach in football. Having a talking Trans-Am as a head coach was odd at first, but KITT proved to be the only entity capable of corralling Hasselhoff. Their union resulted in many unbelievably convenient endings. A franchise with a history of being on the wrong end of bad calls and scheduling, now regularly got every call it needed to win and never played another 10AM road game on the East Coast again. It was a miraculous transformation. 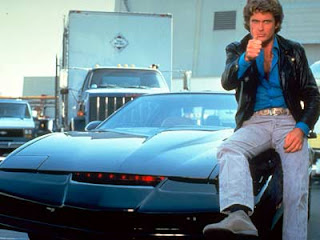 By the time it all had ended, Hasselhoff was still incredibly self-satisfied and talentless, KITT had turned into a Mustang, and Pam Anderson was known more for her sex tape with Pearl Jam bassist Jeff Ament than her cheerleading. The wins were great, but the team’s success and flashy image didn’t fit in the great NW. The Seahawks eventually re-located, becoming the first European NFL team, settling in Berlin, Germany. Seattle was left waiting for a team that better fit the mold of breaking hearts and causing hand injuries from punched drywall. It remains unclear if they will succeed in finding a new franchise, but one thing is certain, Seattle fans will be complaining between sips of $7 coffee about East Coast bias until they do.

—Tune in next week for a look into Matt Hasselbeck’s career in TV!—

[Convervative Life Guard, Elizabeth Hasselbeck]
Matt, you’ve got to give this guy CPR. Tim and I just pulled him out of the water!

[Matt Hasselbeck, Head Life Guard, and lead actor]
I’ve signaled the Coast Guard for help by reflecting the Sun off my head. They’ll be here soon. I’ve been trying to resuscitate this guy for what feels like years. I think we’re losing him. I might as well just smother him and end all hope.