Green grass on blue clear sky, spring nature theme. Panorama or banner. Super high resolution, premium quality.
Fans were finally reunited with players this weekend when the public got its first chance to witness Seahawks training camp at the VMAC in Renton. Change is a constant with this team, and today was no different as defensive leader and former Pro Bowler Lofa Tatupu was granted his release. There is a ton to cover, so let’s dive right in.

Pictures:
Note: Excuse the excess pics of Chris Carter. I’m doing a spotlight series on him.

STAND-OUT NEW FACES
Rookie CB Richard Sherman
Sherman is a tall (6’3″) defensive back, and extremely aggressive. The word was that he loved press coverage, and he proved that to be true today. He jammed receivers at the line all afternoon. Mike Williams and Sidney Rice were not on the field, so it will be worth keeping an eye on Sherman to see if he can be as successful against top talent. Sherman’s aggressiveness carries on down the field, and he was penalized at least once for pass interference. That may be his toughest adjustment to NFL football.

CB Brandon Browner
Browner is even more of a freak than Sherman, standing at 6’4″. Seeing him next to Walter Thurmond shows just how different two players can look at the same position, and Thurmond isn’t small for a DB. Browner played with the 1st team opposite of Marcus Trufant, and looked very fluid and physical. He is quiet, but demands attention on the field.

WR Doug Baldwin
Baldwin may have gotten a little more attention from me because I was watching WR Chris Carter much of the afternoon, but he’s got a suddenness to his game, and plays with a ton of swagger. Seeing him in a pre-season game will tell us much more.

RT James Carpenter
This is a big man. He will have a lot of success by the looks of it. His strength and footwork in pass-blocking is impressive. Drive blocking is curiously less effective. I did not see him drive players back, but then again, he was matched against Red Bryant much of the day.

SIDELINED PLAYERS
Mike Williams, Sidney Rice, Walter Thurmond, Roy Lewis, Colin Cole, Cameron Morrah, Deon Butler, Leroy Hill did not practice. Hill and Rice cannot practice until August 4th. Cole and Butler are injured. Not sure about the rest. Could just be a day off.

GENERAL IMPRESSIONS
The tempo of practice seemed quicker than last season. The pace of the drills, and the players running them seemed faster. The defensive backs stole the show. Sherman, Browner, Earl Thomas, Kam Chancellor, and Mark LeGree all had their moments. The corners were rolled up in press coverage seemingly every play. It was almost like watching the lineman blocking drills as receivers and cornerbacks were colliding every snap. Sherman not only played physically, but with confidence. On one play, the ball was thrown while he was in full sprint with his back to the line of scrimmage, and he swiveled his head around as the ball left the QBs hand, and was able to tip the pass in the air for LeGree to pick off. LeGree is more thick-bodied than I’d expect from his highlight clips. He did not make any especially encouraging plays, but there was something about him that inspired confidence.
The quarterbacks were pretty bad. Charlie Whitehurst did fine, but was far from commanding. He made a few nice touch passes over the top. Josh Portis is a major project. He fumbled at least three snaps, and was inconsistent throwing the ball. Zac Lee looks like a more promising player at this point.
Jameson Konz is an interesting talent at tight end. He seems to have good hands and good speed. It was hard to tell about his blocking. Ryan Travis is small for the position, and was not the most inspiring blocker.
Golden Tate had a nice practice. His routes seemed crisper, although there were a few rounded corners for sure. He continues to flash reliable hands. He needs to prove it in games. Baldwin got a ton of snaps behind Tate. He is fast and looks to have strong hands. Chris Carter looks like he is behind Baldwin in the depth chart, but had a nice series where he caught three in a row, including his first against 1:1 coverage from Earl Thomas. Carter runs nice routes, and was getting separation. He did look to run a little slower when he knew the ball wasn’t coming his way. The wide receivers were tough to gauge without Mike Williams or Sidney Rice out there. Where does Ben Obomanu play when they are both available? Kris Durham looks sleek and fluid, but did not get the ball thrown to him that I can recall. I could see the team keeping 6-7 receivers this year.
Pep Livingston flashed a few times rushing the passer. He’s a strong kid. Red Bryant continues to just be a massive individual. When he and James Carpenter collide, the field shifts a few inches. Max Unger checked in  with a gorgeous pancake block (didn’t catch who he pinned). Unger has never struck me as a particularly physical lineman, so that was good see. John Moffitt seemed to play fine. Nothing great or terrible there.
The running backs looked good, even great at times. Marshawn Lynch was hammering people as usual. Leon Washington was flitting around, but Justin Forsett looked special at times. He drew oohs and ahhs as he juked defenders on multiple occasions.
The offensive philosophy of Darrell Bevell is hard to pick-up after just one practice. They ran a ton of screen passes today, but that may just have been what they chose to install this afternoon. The same could be said of the defense. I’ll be back on Tues and Thurs of this week, and should have a much better feel after seeing some more action.
Start typing to see results or hit ESC to close
softy russell wilson real hawk talk 49ers cardinals
See all results
More Stories 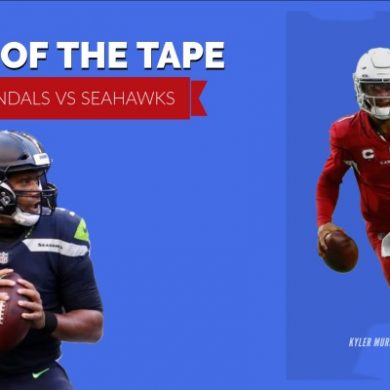