To Suck, Or Not To Suck is a series exploring whether franchises have a better chance of winning a Super Bowl by suffering through some terrible seasons to get higher draft choices, or whether winning begets more winning. Each article will look at this question from a different angle. All will be based on quantifiable data. Varying interpretations and debate are highly encouraged!

The first part of this series examined the all-important position of quarterback, and where Super Bowl-winning quarterbacks are taken in the draft. No matter how critical the quarterback is to a team’s championship aspirations, there needs to be dominant talent surrounding that player to have a real chance. NBA teams often talk about needing three all-stars to be true championship-contenders. There has never been a similar formula for NFL teams, so this article will examine how many dominant players a team must have to win a ring, and where those dominant players are drafted. The measure of a dominant player for this analysis will be selection to an All-Pro team. NFL All-Pros are the best of the best. These are not the Pro Bowl players that are often selected based on past achievements or popularity. The key question for every article in this series will be whether there is evidence to suggest losing, and the higher draft choices that come with it, is the best way to build a championship team. In this case, history shows that teams have just as much of a chance to draft an All-Pro player late in the first round as they do at the top.

It should be noted that All-Pro voting has been around since the 30s. A number of different press corps have held All-Pro voting through the NFL era. All the data for this article was pulled from Pro-Football-Reference.com where they list a player as an All-Pro if any of the various All-Pro voting polls nominate the player to either the first or second team. Kickers, punters and special teams players were omitted as the focus was on positions that have a larger impact on teams winning or losing. Nobody is going to build their franchise around dominant punters.

There have been 160 players named to the All-Pro team since 2008. More than half of those (86) were first-round draft choices. Consider that for a moment. Every year there are at least 224 players selected (7 rounds X 32 teams). Only 32 of those players (14%) are selected in the first round (since the Texans were added in 2001). The fact that 14% of the population of draft choices is making up more than half of the dominant players in the league, gives fans some indication of why first-round draft choices are so valuable.

Interestingly, it doesn’t really matter where in the first-round a team is selecting. There are just as many All-Pro players that were selected in the bottom of the round (20-32) as there were in the top (1-10). Of the 86 All-Pro players that were drafted in the first round, 31 were picked in the Top 10 of their draft class, 24 were picked between 11-19, and 31 were picked from 20-32. It is tempting to believe that being part of a winning team influences voters. In other words, the best middle linebacker in the NFL may play on a last place team and not get the notoriety that winning team players get. That likely plays some part, but when you see names like Ray Lewis (drafted #26), Clay Mathews (26), Ed Reed (24), Nick Mangold (29), Nnamdi Asomugha (31), Steven Jackson (24), and Chris Johnson (24), it is hard to argue these players are solely getting votes because of their team’s fortunes.

Once you get out of the first round, all bets are off. A whopping 23% of the All-Pro players not drafted in the first round were completely undrafted. Names like Arian Foster, Antonio Gates, James Harrison, Cameron Wake, Wes Welker, Jeff Saturday, and Kris Dielman appear on the undrafted list. There were only 19 All-Pro players in this time frame that were drafted in rounds 4-7. That means teams have almost an equal chance of finding an All-Pro in the undrafted free agent pool as they are after round three. 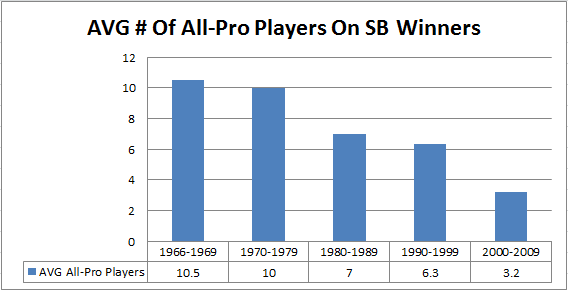 Of the last 10 Super Bowl winners, only three teams had more than three All-Pro players on their roster. Again, keep in mind, that this is not counting kickers, punters, kick returners or other special teams selections. Four of the last five winners, and five of the last seven, have had exactly three All-Pro players. It is almost as if the NFL has become the NBA in that respect. Find three dominant players to build around, and your team has a good shot to win it all. It also seems to pay to bunch the dominant players on one side of the ball. Two of the past three winners (Green Bay, Pittsburgh) had all three of their All-Pros on defense. The pattern continues as you see teams known for their offense (1999 St. Louis Rams) with most of their All-Pros on the offensive side of the ball, and dominant defenses (2002 Tampa Bay Bucs) with all of their All-Pros on defense. Of course, when you go back to the age of dynasties like the Cowboys of the 90s and the 49ers of the 80s, their dominant players were spread across the field.
The simplest interpretation of all this data is that teams likely need at least three All-Pro-caliber players to win a Super Bowl, and that the best way to find those players is to get as many first-round picks as possible. It doesn’t appear to matter where those first-round picks are. So, in that sense, losing teams don’t seem to have any better chance to add dominant All-Pro players than winning teams that pick at the back of the first-round.  The team that ends up with the #1 overall pick next year is in the catbird seat since they will either add a quarterback that figures to be one of the best in the NFL, or add multiple first-round picks.
Start typing to see results or hit ESC to close
real hawk talk softy russell wilson 49ers rams
See all results