Seattle skyline mount Rainier plane blue sky north west city center downtown architecture corporations business working places outdoors modern landmarks Space needle tower trees colorful metropolitan cosmopolitan living skyscrapers USA picturesque post card d
Way back during the build-up to the free agent signing period there was a bunch of chatter from fans and national “experts” that the Seahawks had a major need at corner back, and would be spending big bucks to lure a player like Jonathan Joseph. One famous expert said, “You don’t get starting NFL corners from the CFL and the 5th round of the draft.” It turns out, you can if you run the right defense. After injuries to Marcus Trufant and Walter Thurmond, Richard Sherman got his chance to step forward as a rookie starter on Sunday. He yielded an early touchdown, where it was unclear if his technique was off or if Earl Thomas blew his inside help, but then was the catalyst behind two turnovers, including his first interception. The way he made the play was just as encouraging as the play itself.

Sherman is at the top of the formation, opposite fellow rookie, WR A.J. Green. Both Browner and Sherman are in their familiar press coverage, rolled all the way up. 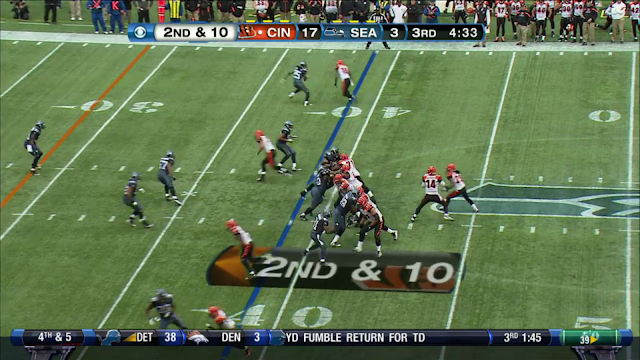 Sherman gives Green an outside release, channeling him toward the sideline. This indicates he knows he will not have help from a safety in the middle of the field. This is what they call “being on an island,” as a corner. Note, though, that Green gets a free release. No actual press contact happened at the line. 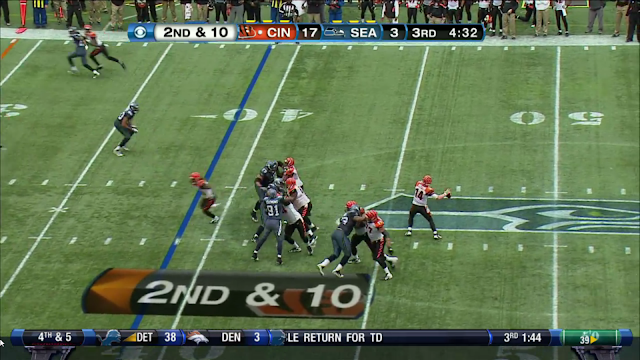 This is the key to the play, and the most encouraging sign for Sherman’s development. Sherman had terrible trouble in training camp and during the pre-season about turning his head to pick-up the ball, and would instead get flagged for pass interference. This is not an uncommon problem for DBs to have. Browner has this challenge as well. Sherman clearly has turned his head here before the ball has even been thrown, likely keying off of the receiver who has turned his head as well. Green has closed the gap with Sherman, but both are running in full stride now. Again, note the total lack of safety help (by design). This was Sherman’s play to make or break. 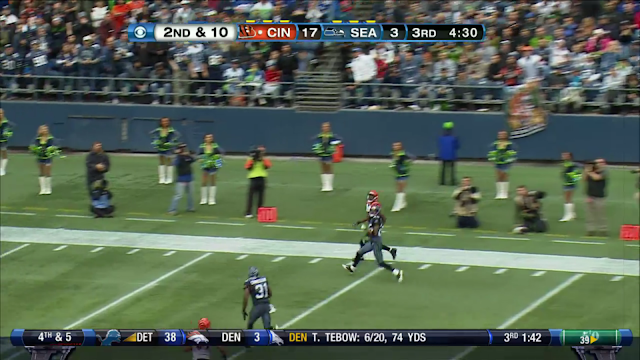 Sherman is perfectly positioned between the ball and Green. The chances of a completion at this point are slim. 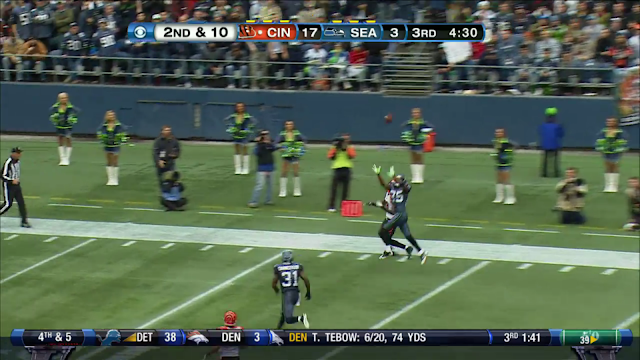 Green doesn’t even attempt a reception, and Sherman looks far more like the receiver going up for the ball. 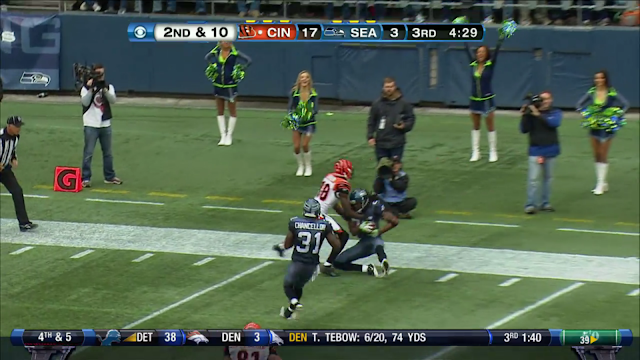 The hardest part of interceptions for defensive players is making the catch. Sherman makes a tough one here. 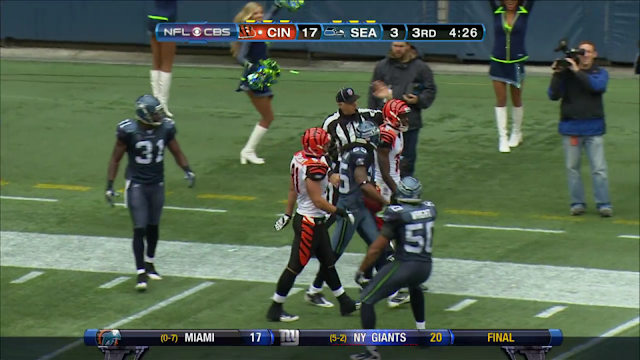 This ain’t Kelly Jennings. Sherman makes sure Green gets an earful before taking the ball back to his sideline.

Sherman has unique physical talents, appears to be a hard worker who learns quickly, and plays with a swagger well-suited for the cornerback position. He will have his “Mike Wallace” game as Browner did, but he is going to be fun to watch for a long time.