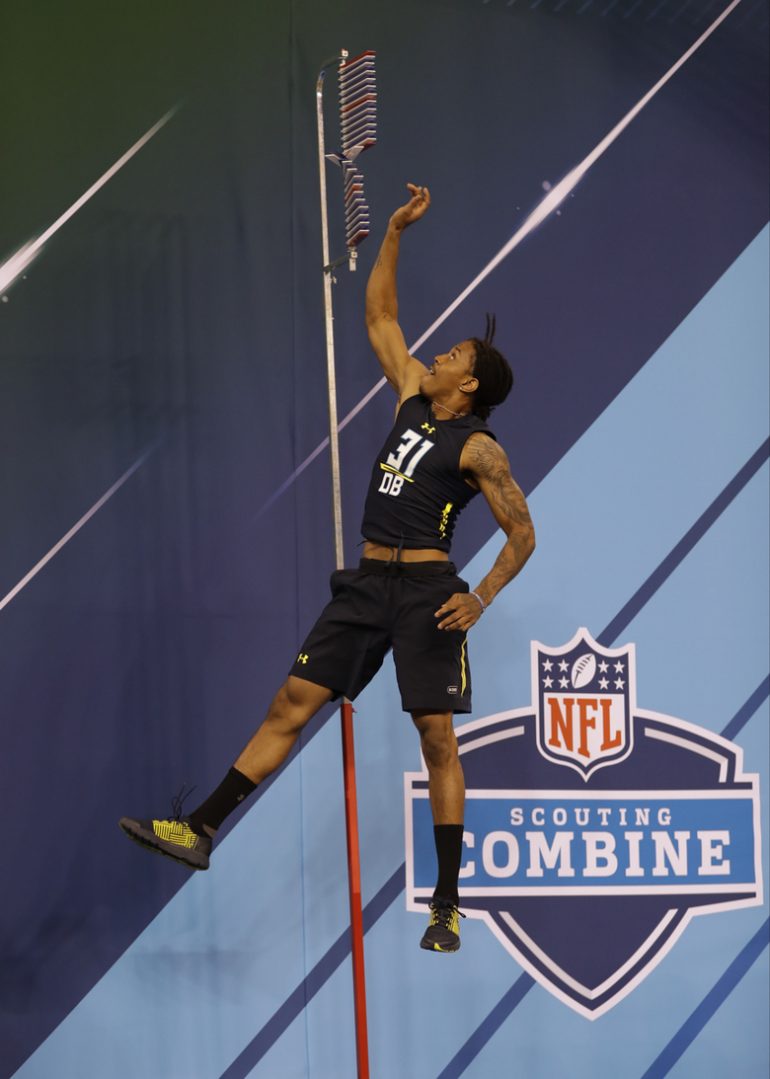 The draft board really began to take shape following the end of the Scouting Combine last weekend in Indianapolis and it’s clear how this year’s draft really lines up for the Seahawks, given the club’s major organizational needs.

It might not fit with the one area most fans surely want to address (offensive line, cough cough) but this draft, however, does offer the deepest group of cornerback prospects to hit the league in quite some time.

With DeShawn Shead’s future in question and Jeremy Lane coming off a down year, it seems like the year to reload the talent inthe Legion of Boom.

Will the Seahawks buck their recent draft trends and go with a defensive back in Round 1? Or will John Schneider stockpile picks by moving down?

Check out our post-combine mock draft below to see what the Seahawks could end up doing.

1) Cleveland Browns: Myles Garrett (DE, Texas A&M)– The Browns still have a gigantic need at QB, especially with Tyrod Taylor staying in Buffalo and Jimmy Garroppolo reportedly off the trade market, but no quarterback in this draft is worthy of this slot so Cleveland goes with the obvious pick and should go with the dynamic edge rusher who just tore up the Combine.

2) San Francisco 49ers: Malik Hooker (S, Ohio State) — Brian Hoyer isn’t the long-term answer for the new 49ers regime (or realistically anyone), but none of these QB prospects should really intrigue Kyle Shanahan and John Lynch, so the 49ers begin its transformation of their new Seahawks-esque defense with the addition of a rare safety with Earl Thomas-like range.

3) Chicago Bears: Solomon Thomas (DE, Stanford) — It seems like the Bears are about to vastly overpay for Mike Glennon in free agency once the new league year begins, so instead of spending this pick on a QB, the Bears continue to stockpile pash rushers and add Thomas, who has the best first step of any defensive lineman in this class. Think Michael Bennett.

5) Tennessee Titans: Marshon Lattimore (CB, Ohio State) — Given the depth at cornerback in this draft, this might be a bit of a reach but the Titans need to address the secondary, especially with both safeties off the board. Clemson WR Mike Willians could be in play here if the Titans don’t end up dealing for Brandin Cooks.

6) New York Jets: Rueben Foster (LB, Alabama) — The Jets appear to be punting this season in order to position themselves for stud USC quarterback Sam Darnold in 2018. So they address a short-term area of need, and select Foster, an ideal fit as an inside linebacker in a 3-4 defence. Todd Bowles needs more tone setters on his roster.

7) Los Angeles Chargers: Garett Bolles, (OT, Utah) — The Chargers would be fantastic scheme fits for Hooker or Thomas, but with questions at both tackle spots (especially after releasing D.J. Fluker), the Chargers decide to ramp up the pass protection for Philip Rivers in the twilight years of his carer.

8) Carolina Panthers: Leonard Fournette (RB, LSU) — The Panthers are hoping to address left tackle in free agency so they go with the top talent on their board and peg Fournette to team up with Cam Newton in the backfield. Jonathan Stewart’s age, durability, and no quality backup on the roster make this a logical fit.

9) Cincinnati Bengals: John Ross (WR, Washington) — Andy Dalton took a step back without Marvin Jones and Mo Sanu last year and Ross’ electric 4.2 speed is a perfect compliment for the rangy A.J. Green. First Husky off the board.

10) Buffalo Bills: Deshaun Watson (QB, Clemson) — Despite retaining Tyrod Taylor, the Bills clearly aren’t sold on their incumbent starter so they need to look at adding a long-term option at QB. Watson has the arm talent, and athletic ability to fit perfectly in Buffalo’s new offensive scheme.

11) New Orleans Saints: Charles Harris (DE, Missouri) — A cornerback would make some sense here (Quincy Wilson is a scheme fit), but the Saints instead prioritize an edge rusher with all the talented quarterbacks in the NFC South. Harris is a fluid mover that brings speed and power off the edge.

12) Cleveland Browns: Mitchell Trubisky (QB, North Carolina)– The available quarterback options are shrinking by the day, so Hue Jackson throws a dart at the prospect with the biggest upside in the class. A classic boom or bust pick.

13) Arizona Cardinals: Corey Davis (WR, Western Michigan)– Larry Fitzgerald is near the end of his career and the team needs a bigger receiver to compliment J.J. Nelson and John Brown since the team already moved on from Michael Floyd.

14) Philadelphia Eagles: Mike Williams (WR, Clemson)– Carson Wentz needs playmakers to work with. Williams has the physical tools and production to be an ideal No. 1 receiver that can win with size and provide a safety blanket for the Eagles’ young quarterback.

15) Indianapolis Colts: Derek Barnett (DE, Tennessee)– With Ryan Grigson no longer in the picture, the Colts might actually address their hapless defence early in the draft, and the new general manager should look at adding an edge rusher with big-time upside. Barnett fits the bill.

16) Baltimore Ravens: O.J. Howard (TE, Alabama)– Ravens GM Ozzie Newsome was a prolific tight end at Alabama so he dips back into his alma mater to select the most well-rounded tight end in the draft. Howard is a sizable upgrade over Maxx Williams and Dennis Pitta.

17) Washington Redskins: Jonathan Allen (DE, Alabama)– Based on tape, Allen is a top-five talent, but lingering shoulder concerns could cause the Alabama lineman to fall into the teens. If his health holds up, this would be outstanding value.

18) Tennessee Titans: David Njoku (TE, Miami)– Tennessee already addressed its secondary at pick No. 5, so they go with the top playmaker on the board and bring in the athletic freak at tight end who has drawn comparisons to Jimmy Graham. Njoku was a total stud in the on-field testing in Indianapolis.

19) Tampa Bay Buccaneers: Dalvin Cook (RB, Florida State)– Jameis Winston would love this pick as the Bucs bring in his former college teammate from FLorida State and add an electric piece in the backfield. Cook makes a ton of sense with Doug Martin’s future in doubt.

20) Denver Broncos: Ryan Ramczyk (T, Wisconsin)– The Broncos’ free agent budget might be devoted to Tony Romo, so if they leave themselves short at one of the tackle spots, Ramczyk is a solid scheme fit for new OC Mike McCoy and takes another OT the board for the Seahawks.

21) Detroit Lions: Taco Charlton (DE, Michigan)– The Lions made a big splash before free agency, reportedly agreeing to a big deal with right tackle Ricky Wagner, so they address the team’s next biggest need with a pass rusher. The Lions had little outside rush outside of Ziggy Ansah and were gashed against the run all season.

22) Miami Dolphins: Hasaan Reddick (OLB, Temple)– Adam Gase did a marvelous job with Miami’s offense last season so now he needs to put some resources in the defence, so the Dolphins go with the most athletic linebacker in the draft, who exceeded expectations at the combine. Reddick was a standout throughout Senior Bowl week as well.

23) New York Giants: Christian McCaffery (RB, Stanford)– Rashad Jennings got released and Adrian Peterson seems like a bad fit for a team that uses plenty of Shotgun formation, so they go with McCaffery to add a loaded offence that already brought in Brandon Marshall. McCaffery has unique talents and his athletic traits should transfer to the next level.

24) Oakland Raiders: Marlon Humphrey (CB, Alabama)– Ken Norton Jr. runs the Seahawks’ defensive scheme in Oakland so they’ll likely be on the lookout for corners with size and arm length to address a porous secondary.

25) Houston Texans: Forrest Lamp (G/T, Western Kentucky)– The Texans need immediate protection for whoever ends up starting at quarterback, so they address the interior of an offensive line that, like so many others, needs work. Many Seahawks fans could be crushed if Lamp goes at this spot.

26) Seattle Seahawks: Kevin King (CB, Washington)– This is an ideal pick for the Seahawks. King has the size, athleticism, tackling ability, arm length, and physical edge that Pete Carroll loves on defence. King could be a Day 1 starter on the outside and should help bring some swagger back to the Seahawks. If King is on the board, the Seahawks shouldn’t get cute and move down unless they’re blown away with an offer.

27) Kansas City Chiefs: Sidney Jones (CB, Washington)– Back-to-back Huskies! The Chiefs did quite well when they landed former Washington corner Marcus Peters so they double dip and bring a perfect fit for what the Chiefs look for in the secondary.

28) Dallas Cowboys: Obi Melifonwu (S, Connecticut)– Jerry Jones did quite well when he took combine warrior Byron Jones out of UConn in 2015, so he can’t help himself when this year’s combine standout, Melifonwu is on the board at pick No. 28. Melifonwu doesn’t have elite tape but his measureables and leaping ability are off the charts.

29) Green Bay Packers: Quincy Wilson (CB, Florida)– This is likely too steep a fall for Wilson, but if this scenario unfolds, the Packers won’t get cute and turn in their card quickly. Wilson fills a big need after the Packers were ravaged in the secondary last season.

30) Pittsburgh Steelers: Tak McKinnley (DE/OLB, UCLA)– The Steelers are looking at cornerbacks in free agency but still have a lack of quality young edge rushers, so McKinnley, despite a recent surgery, is a logical option to pair with Bud Dupree. James Harrison played too many snaps last season.

31) Atlanta Falcons: Budda Baker (S, Washington)– Dan Quinn saw the value of Earl Thomas up close in Seattle and with Steve Sarkisian now on staff, they’ll be well aware of Baker’s skill set. Adding the Washington safety to a defensive backfield with Keanu Neal would be Quinn’s version of Chancellor and Thomas.

32) New England Patriots: Jabril Peppers (S, Michigan)– Can’t you just see Bill Belichick absolutely loving this player as a versatile chess piece? He could use Peppers at linebacker, in the secondary for various formations, and at returner.