Seattle skyline mount Rainier plane blue sky north west city center downtown architecture corporations business working places outdoors modern landmarks Space needle tower trees colorful metropolitan cosmopolitan living skyscrapers USA picturesque post card d
The recent poll posted on this blog asked Seahawks fans what they wanted to see the team do with their 1st-round draft pick (#12 overall). The leading answer, with almost a quarter of the vote, was to trade back to accumulate more picks. Now, that could also be read to say 75% of fans want to draft a player, even if not the same player, but 25% is still a significant chunk of the fan base. It also highlighted my own internal debate about what the best thing is for the Seahawks to do. There are going to be some great players available in the draft at #12, players that could become elite at their position. The Seahawks, however, only have six picks through all seven rounds. Trading back could reap something as high as a 1st-round pick next season, to just adding a 2nd-5th this season, depending on how far back they go and how desperate the team is who wants their spot. The Seahawks are an improving squad that is unlikely to be drafting this high again for some time, so their decision to stay put or trade back will have a lasting impact on the franchise.

Many people point to franchise quarterbacks as being the key element to any Super Bowl run, but the truth is Super Bowl teams are made up of elite players. Elite, in this case, means All-Pro players who rate as the top 2-3 in their position within the NFL. Free agency and the salary cap have had a drastic impact on the number of elite players necessary to win a Super Bowl over the past 50 years.

This gets to the fundamental question of whether it is quality or quantity that matters in the NFL. The 2010 Green Bay Packers are a great case study in that regard. They won the Super Bowl despite losing an NFL-high 91 games due to injury. If there was ever a case for the importance of depth, it was that Packers team. Look closer, though, at that team. Was their depth the key to winning that Super Bowl, or the play of their elite players: Aaron Rodgers, Clay Mathews, and Charles Woodson? It is hard to imagine that team winning the Lombardi Trophy with a back-up playing in place of Rodgers or Mathews, even if they were above-average players. The Packers probably don’t even make the playoffs, though, without the depth they had on the roster. Both depth and elite talent played a key role in that run to the Super Bowl, but when it comes to actually winning the Super Bowl, elite talent trumps depth every time.

The more common story in the NFL is the teams that make a deep run in the playoffs enjoy remarkably healthy seasons, making depth a non-factor. The Giants found their stride last season when all their key players got healthy and stayed that way through the Super Bowl. New England, outside of Andre Carter, had all their key players for the run to the championship. The 49ers has an unbelievably fortunate four players on injured reserve during their breakout season, while the Rams had 13 players on IR and the Seahawks had 14. Depth can help weather a storm of injuries, but staying healthy is a far more reliable way to win big.

Seattle had one elite player in 2012. Earl Thomas earned his first All-Pro honors. Kam Chancellor and Richard Sherman are possibly close behind. It is worth noting that there are not any players on offense approaching All-Pro status outside of possibly Marshawn Lynch. It is also interesting that most fans that want to keep the #12 pick want to spend it on defense. Could the Seahawks win the Super Bowl with only elite players on defense? That’s a research project for another time. San Francisco almost got to the Super Bowl last season with only T Joe Staley making the All-Pro team on offense, and four All-Pro players on defense.

Trading back would make it far harder to add an elite player, unless the trade netted another first-round pick next season. Finding elite players after the first-round is exceedingly difficult. 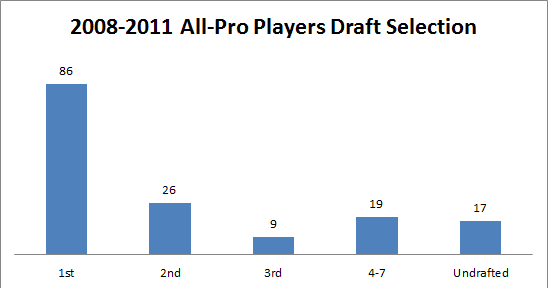 As tempting as it is to add another second-round pick, fill in the team’s lack of fifth-round pick, or some other combination, the risk of missing out on an elite player seems too great. The general consensus is that the quality of talent in this draft drops of significantly after about 15-20 players. It is possible the Seahawks could trade back from #12 to #18 and still wind up with one of those players, but if the guy they love is there at #12, they should take him. The Seahawks path to the Super Bowl will be paved by adding more elite players, not by adding more depth.