Pete Carroll will reveal an area of emphasis from time-to-time in his interviews. In between the platitudes, he will mention something worth paying attention to. Chunk plays, or explosive plays, are defined by most as passes over 20 yards and runs over 10 yards. Getting those plays on offense and limiting them on defense is a key focus point for the Seahawks coaching staff. This is the third in a series of short articles exploring where the team is their pursuit of being explosive on offense and defusing on defense.

Chunk runs are generally considered those of 10 yards or more. NFL.com only has historical data on runs of 20+ yards, so we will use that for reviewing the Seahawks progress. One of the intriguing aspects of doing the research for this series has been seeing the overall trends in the NFL. For example, the Seahawks allowed the same number of 20+ yard runs (12) from 2007-2009, yet their ranking in the NFL in that category fell precipitously. Run defenses across the board were improving in these areas, or NFL offenses were less focused on getting big runs. Either way, the Seahawks were relatively porous in this fashion. Pete Carroll’s first year made things worse. The team gave up 16 explosive runs, and fell near the bottom of the NFL in stopping them. The 2011 Seahawks halved that number to 8 such runs, and saw their ranking climb well into the Top 10. 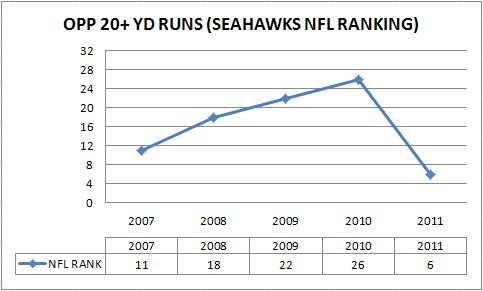 Those following this series now know the 2011 Seahawks defense ranked 2nd in opponent explosive pass plays and 6th in opponent explosive run plays. Carroll is building a defense that forces opponents to string together a long series of shorter plays in order to move the ball. Grabbing big chunks of yardage is not easy against this group. They did this without a strong pass rush last year. The pass rush should be stronger this year, even if it is not as strong as some of us are hoping for.