Pete Carroll will reveal an area of emphasis from time-to-time in his interviews. In between the platitudes, he will mention something worth paying attention to. Chunk plays, or explosive plays, are defined by most as passes over 20 yards and runs over 10 yards. Getting those plays on offense and limiting them on defense is a key focus point for the Seahawks coaching staff. This is the first of a series of short articles exploring where the team is their pursuit of being explosive on offense and defusing on defense.

Emphasizing an area of the game and actually producing results are very different things. Carroll’s first season with the Seahawks was a disaster when it came to yielding big plays in the air. His defense finished 31st in the NFL in that category, giving up a whopping 60 pass plays of 20+ yards to opponents. His predecessor, Jim Mora Jr. managed a rank of 17 in the same category a year earlier. Everything changed last year. 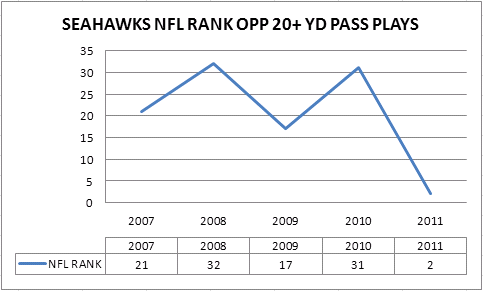 The Seahawks secondary limited opponents to the 2nd fewest chunk pass plays in the NFL in 2011. Not bad for the first season of playing as NFL starters for Kam Chancellor, Richard Sherman and Brandon Browner. The ability to pull this off while being a mediocre and inconsistent pass rush team is all the more impressive. How much better can this get if the pass rush improves this year? Long pass plays take longer to develop, and are most susceptible to sacks. If the defensive line plays up to its ability this season, the Seahawks have a good shot at leading the NFL in limiting long pass plays.