Pete Carroll will reveal an area of emphasis from time-to-time in his interviews. In between the platitudes, he will mention something worth paying attention to. Chunk plays, or explosive plays, are defined by most as passes over 20 yards and runs over 10 yards. Getting those plays on offense and limiting them on defense is a key focus point for the Seahawks coaching staff. This is the second in a series of short articles exploring where the team is their pursuit of being explosive on offense and defusing on defense.

Matt Hasselbeck’s last Pro Bowl year came in 2007. That was the last time the Seahawks were Top 10 in the NFL in chunk plays through the air. They had 51 such plays that year. Interestingly, that’s the same number of big pass plays the Seahawks had last year with Tarvaris Jackson at the helm. The league is seeing more and more of these big plays through the air, so it takes more to crack higher in the rankings. 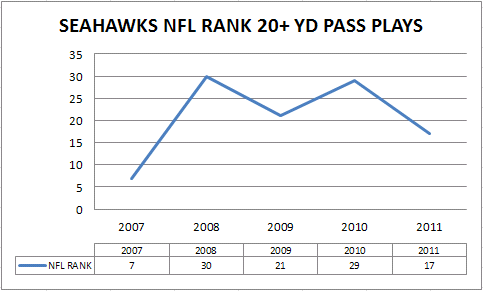