There has been some level of debate about just how good the pass protection has been for Russell Wilson. The facts are that the Seahawks have given up the 10th-fewest sacks in the NFL, but are ranked 20th in sack surrendered as a percentage of pass attempts (a big drop after they gave up four vs the Jets). Both are significantly improved over last season when Seattle finished among the bottom five teams in football in both categories. Some will tell you that Wilson’s elusiveness in the pocket is the key to the improvement. Others will credit the offensive line. The unspoken element is the play-calling of Darrell Bevell. Specifically, the use of play-action passes on a high percentage of throws has a direct effect on defensive players ability to rush the passer aggressively. A new element has emerged from Bevell’s playbook in recent weeks that has a similar impact on pass rushers. The screen pass has returned to Seattle. Seahawks fans that are old enough to remember John L. Williams and Dave Krieg know the screen pass very well. It was a staple of the Chuck Knox offenses, and was a deadly counter-punch when used effectively.

Bevell has dabbled with it in the last two games, in a way that reminds me of the way he dabbled with the read-option against Carolina. That scheme emerged more and more over the past few weeks as the team got more comfortable with it. The same may be happening with the screen game. Take a look at the two very different approaches the Seahawks took with the screen pass in the Jets and Vikings game. First, we will explore the play against the Jets. 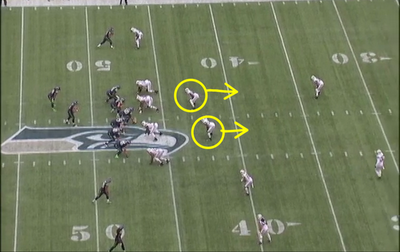 Seattle lines up in a 3 WR, 1 TE, 1 RB formation. The Jets have two linebackers in the box, and four down lineman. After the snap, the Jets linebackers drop into zone coverage. 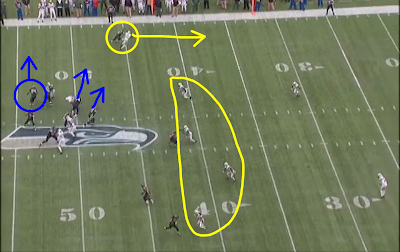 Marshawn Lynch leaks out to the left, and Wilson scans the field, looking like he is going to throw to a receiver. Doug Baldwin is open underneath, and it is possible Wilson had the option to throw there. Two lineman are already leaking out the left with Lynch, so there is no doubt the screen is a designed play. The only question is whether it was the primary read for Wilson. This is different than the classic screen where the quarterback is back-pedaling in the hopes of baiting the lineman deep into the back-field before he throws it over their heads. The receiver, I believe to be Golden Tate, is running his man off the play deep down-field, leaving a gaping hole on the left side. 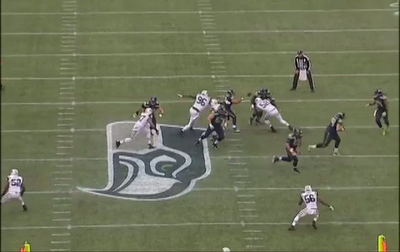 Wilson waits until the Jets lineman are right on him, and then executes a shovel pass to Lynch. 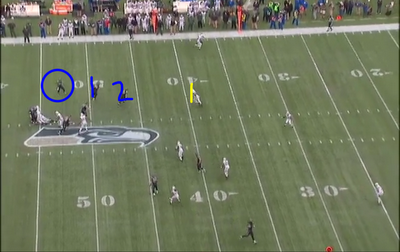 At this point, Seattle has two lineman, and Lynch against just a single defender on that half of the field. 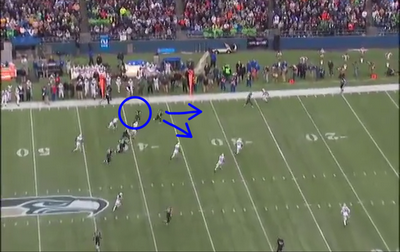 The first lineman, Paul McQuistan, whiffs on his block, but interferes enough with the defender to allow Lynch to run by untouched. John Moffitt is still leading the convoy, and can pick which defender he wants to erase. 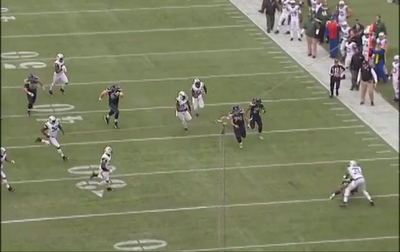 Antonio Cromartie is getting blocked at the 25, and Lynch has still gone untouched at the 35 with Moffitt leading the way. 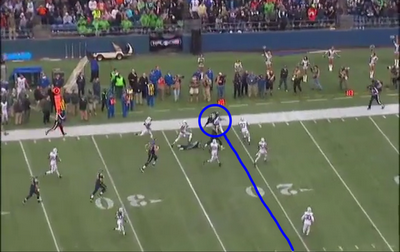 Lynch is finally tackled by Cromartie at the 21, after a 26-yard gain.

Now, look at the inside screen run in the Vikings game. 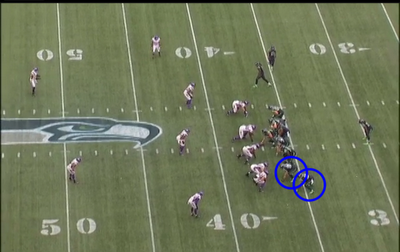 Seattle lines up with 2 tight ends, 2 WRs, and 1 RB. Golden Tate comes in motion toward the line. The two tight ends are on the left side off the formation, which draws two of the Vikings eight defenders in the box that side of the formation. The Vikings are geared up for the run. 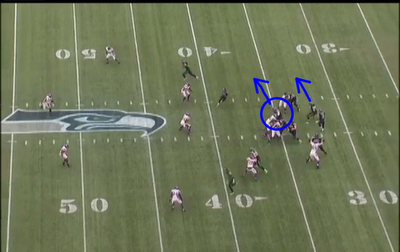 Lynch slides out to the right, as do a couple of his lineman. Sidney Rice is occupying the corner and safety on that side with a go route. Tate runs a crossing pattern that holds the linebacker on that side, and occupies the middle linebacker who appears to have zone responsibility. Both tight ends are out in patterns. 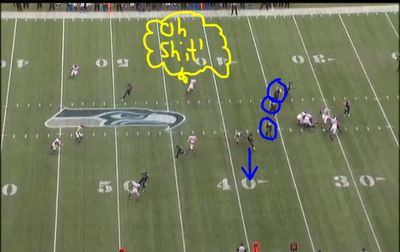 Wilson has yielded some ground and got the ball out to Lynch, with what now is three lineman in front of him. There is one Viking defender on his side of the field within 20 yards of him. Unlucky for that guy. Tate has effectively pulled his defender away from the play with his crossing pattern. 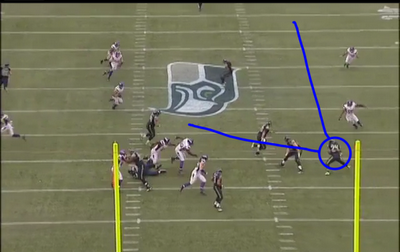 Lynch chooses to take the play inside. It is unclear whether it was designed to be an inside screen, or he just read it that way. Check out the lineman running from left to right and the defender to Lynch’s right. He’s about to go bye-bye. 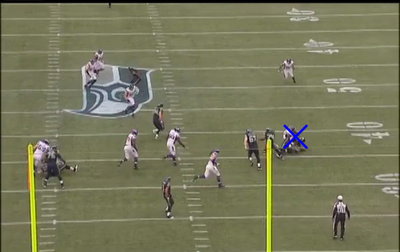 Breno Giacomini eliminates the nearest threat, and Lynch is off to the races. He ends up running all the way back across the field for a 23-yard gain.

Closing Thoughts
Two plays in two weeks does not a trend make, but this has not been part of the offensive approach for a number of years, so it stands out. The fact that both plays were extremely effective would make most coaches explore it further. These are timing plays, and require a lot of repetition. Even if they are only a minor part of the offense, the threat of these sorts of plays will give defensive coordinators headaches. Seattle ran one from a passing formation and one from a running formation. Players have enough trouble tackling Lynch when he runs right into them. Tackling him with 2-3 lineman acting as body guards is nearly impossible. Keep an eye out to see how this evolves over the rest of the season.