Battle Of The Best: 2013 Seahawks Defense vs. 1976 Pittsburgh Steelers

the soccer stadium with the bright lights
There have been many stories about what defense stands as the best in the history of the NFL. This series intends to trump them all. The 2013 Seattle Seahawks defense belongs in the conversation for all-time great defenses, but it is unclear exactly how they compare to the legendary 2000 Ravens, 1985 Bears, the vaunted Pittsburgh Steel Curtain and others. One-by-one, I will examine the 2013 Seahawks versus titans of years gone. We will look at numbers that compare apples-to-apples as best as we can across generations and rule changes. It is not clear where the Seahawks stand as we begin. The goal is to be objective and to enjoy the battle. Next up, Jack Lambert and the 1976 Pittsburgh Steelers.

The Steel Curtain was one of the most feared defenses in NFL history. They ruled the 70s with four Super Bowl wins, so why would I pick one of the years where they did not win the championship? Having done a few of these now, I can see which of the Steelers defense will fare the best in these measures, and the ’76 group stand above the rest. We can credit them with being a championship defense, as they won one the previous two years, so that will not be held against them. The biggest challenge for this Steelers defense is the era they played in. 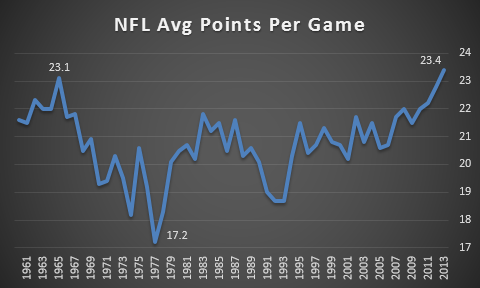 Offenses were never more feeble in the NFL than they were during the 70s. Time to see how that impacts the Steelers relative numbers.

Right away, we see a massive divide between the average offense of the 70s and the average modern offense. Teams averaged almost 50 yards fewer per game than they do now. The Steelers 237 yards per game allowed is an eye-catching number, but relative to the era in which they played, it was less impressive than what Seattle did at nearly two standard deviations below the norm.

Looking at gross yards allowed gives an overview, but it is important to look at yards surrendered per play. A defense that is on the field longer because their offense cannot move the ball will face more plays and more total yards allowed. They should not be penalized for it.

Even when zooming to the per play level, the Seahawks separate themselves from the Steelers. This round is solidly in the Seahawks favor.


This one is closer. Holding teams below 10 points per game in any era is remarkable. Seattle has a slight edge here in relative numbers, but not enough to give them an edge over the absolute number Pittsburgh put up. Let’s take a look at scoring per play to see if the picture gets clearer.
These teams are pretty inseparable in scoring defense. Seattle has a better performance relative to era in which they played, but the Steelers absolute performance is far ahead of the Seahawks. Split decision in this round.

Up to this point, we have been comparing the two defenses performance against league averages. But neither the Seahawks nor the Steelers played every opposing offense in the league. We need to get specific about which offenses they played, and how they did relative to the averages of those offenses.

Both teams get credit for winning a Super Bowl, even though this particular Steelers team did not make it to the championship. Still, Seattle wins this round on the strength of how they stepped up against the best competition and held their specific regular season opponents farther below their typical output.


Pittsburgh is far behind here. They took the ball away far more often, but so did everyone else in the 70s. They were not even the best in the league at doing so, ranking 5th in the NFL. Seattle easily wins this round.


Terry Bradshaw, Lynn Swann, Franco Harris, and the rest were among the better offenses in the NFL. There were top ten in scoring and yards for seven straight seasons from 1974-1980. Sure, they were helped by a dominant defense, but that defense was helped a lot by that offense as well. Seattle gets a slight bump here as their offense was a tick below what the Steelers ran out there.

Blasphemy, I know. How on Earth could any reasonable person place the 2013 Seahawks ahead of the best of the Steel Curtain defenses? The numbers speak for themselves. Some may place a greater weighting on the run of championship football the Steelers put together in the 70s. I see a complete team that cannot claim the defense should get the lion’s share of the credit for their winning. Or, at least, it is too muddled of a picture to give them all the credit. This is a classic case of why the standard deviation route is so interesting and valuable. Before this research, I was not aware how bad offenses were in the 70s. To judge a defense without being aware of what they were up against makes little sense. The Seahawks played in a far more offense-friendly era, and stood out more than the normal defense against those offenses. They also raised their level of play against the very best of those offenses, where the Steelers took a step back in those moments. Seahawks earn the win here.
Keep an eye out for round six of the Battle of the Best when the Seahawks will take on the 1990 New York Giants.