Seahawks fans have heard it before. Some even are guilty of it themselves. Russell Wilson has won a Super Bowl, and is entering his third season, so the team should lean on him more and pass more often. Others will point to various quarterback rankings that are announced and hold it against Wilson that he has not proven he is capable of a 4,000 yard season. Super Bowl history indicates all that talk is counter to what matters most: winning a championship.

The Super Bowl research I have done so far has indicated that teams who get out of balance with their passing and rushing attacks are less likely to win a Super Bowl. But those articles focused on specific teams over a different stretches of time. The game has changed to the point where 5,000 yard quarterback are a yearly occurrence. Names like Peyton Manning, Tom Brady, and Drew Brees are celebrated as the best players in the league at the most important position on the field. The general NFL narrative is that the best teams have the best quarterbacks, and the best quarterbacks prove their worth by being able to take over games and throw for bushels of yards. Let’s see how that narrative translates to the last 25 years of Super Bowls, dating back to 1989.
The following is a list of the starting quarterback for the winning and losing team of each of those Super Bowls, along with their season total in passing yards. Where indicated, some players were injured for enough games that I chose to include their backups passing yards in their season total to get a better read on how much the team passed overall. 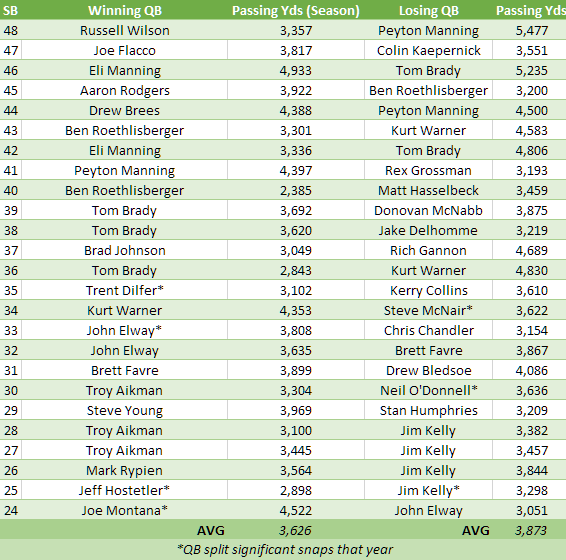 At a glance, it appears that teams that pile up a ton of passing yards are not necessarily in a better position to win. Breaking down the totals should help.

There certainly does not appear to be any indication that heroic passing totals leads to Super Bowl rings. In fact, the more a team has passed the ball, the less their winning percentage is in the big game. Conversely, winning percentage appears to increase as the passing yardage decreases.
None of this means teams should try to be terrible passing offenses. The mounting evidence in this series suggests that repeated and sustained championship success comes from offensive balance. We have seen Aaron Rodgers follow up his first and only ring with one of the most prolific passing seasons in NFL history and go 15-1, only to lose in the first round. We have seen Tom Brady average 3,668 yards passing in the three seasons he won a Super Bowl, and 5,020 yards in the two years that he got to the big game and lost.
A whopping 17 out of the last 25 Super Bowl winners (68%) have passed for fewer yards on the season than their championship opponent. Seattle typified that by passing for an astonishing 2,120 fewer yards on the season than the Broncos.

Let people continue to question whether Russell Wilson is elite. Let the talking heads say he needs to prove he can carry a team. Wilson and Pete Carroll are smart enough to write their own narrative. A balanced offense and stingy defense will get a team much farther than fantasy football quarterback.