I keep trying to obsess about this game. Seattle has a chance to do what few other teams have ever accomplished, and it starts with a win this Saturday. But my obsession to write about the Seahawks usually comes from a place of anxiety; I want to cover every angle to avoid getting blindsided by an unexpected outcome. Pete Carroll, and his merry band of gridiron assassins have robbed me of my writing fuel. The blades of anxiety have been dulled. And I don’t think I am alone. There may have never been a Seahawks playoff game that generated less buzz in the build up than this one.


I found myself wondering today if the 12 flag had been raised on the Space Needle yet. A quick Googling of webcams and space needle came up with an obnoxiously long list of camera shooting from the Space Needle, letting me see every Seattle building except the one I was interested in. My guess is the flag will be raised on Blue Friday, but what a mistake. Give the city a full week of build up before the first game. I think I complained about this last year. Something tells me I will be complaining about it again next year. Plenty of tickets are still available to the game.

There are a few extra press conferences, and some more national coverage of the team, but it hardly feels like playoff time in Seattle. Offices are not decked out in posters and colors. Coworkers are not talking about the big game this weekend. HawkBloggers are barely eeking out an article each day. Are we really so jaded that we are going to take this game for granted? I think we are.

That might be part of the transition from mediocre underdog to peerless super power. Apex predators do not concern themselves with threats from lesser species. Panther fans may take issue with that characterization, but anything other than a Seahawks win this weekend would be colossal upset and would say far more about the Seahawks preparedness than the Panthers superiority.

The Seahawks were the hunted earlier in the year. They have now returned to their natural state as the hunters. No opponent is safe. It may take a few plays or a few quarters to break the Panthers, but they will break.

Tempting fate is not something I am fond of. My superstitions are never entirely extinguished. All the classic warnings signs are there for a tough game. Nobody is picking the Panthers to win. Many are picking them to lose big. Seattle has had a week off. They have been getting a lot of strokes lately from the media and everyone else outside the locker room. Fans are selling their tickets. People are already openly discussing who the Seahawks should hope to play next.

All of that may be true, but Carolina is not the team to take advantage of that. SportingCharts.com has a nice comparison breakdown of the two teams that makes the point visually. The highlighted cell (dark blue for Seattle, light blue for Carolina) indicates which team is better in each category. 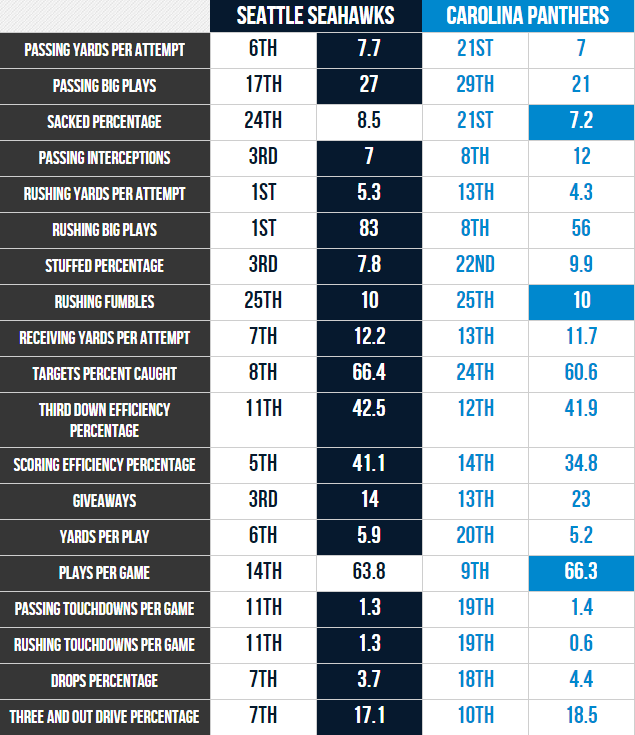 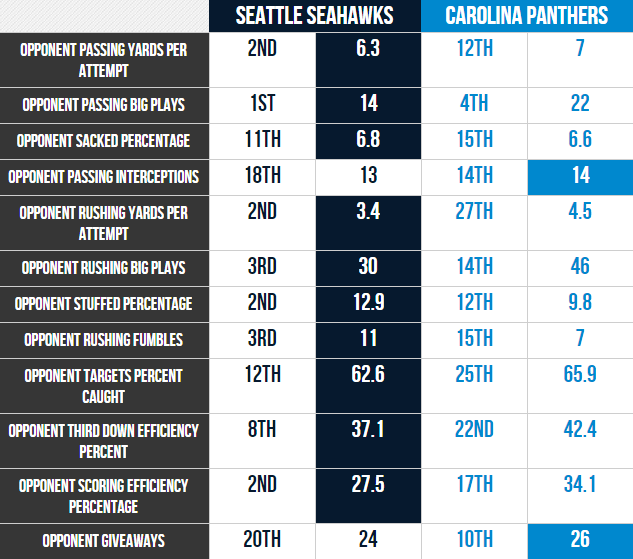 Carolina’s claim to fame is protecting the quarterback slightly better, running more plays, getting one more interception and two more total takeaways. As unsightly as it is to say, the Seahawks are the far superior team, and should win comfortably. That may be tempting fate, but more likely it is forecasting it for the Panthers.

Jordan Hill goes out for the year yesterday and then Star Lotulelei is lost for the Panthers today. There has been plenty of hand-wringing about the Hill injury among Seahawks fans, and for good reason. He had at least a half-sack in each of the last four games and 5.5 sacks in the final six weeks. Searching for his name might soon return information about him instead of his NBA namesake.
He was a player on the rise in a role the team had tried to fill all season. It has been a terrific development for Hill and for the Seahawks future at the position. The impact on the rest of this season is a little overblown. Many of Hill’s sacks came from cleaning up after other players flushed the quarterback from the pocket. That is fine. He is doing his job. It is just very different than a guy that offensive line coaches are game-planning for because he is disrupting the offense so consistently.
DeMarcus Dobbs returns from injury this week and has made some nice plays in his few chances. He is veteran who is a better run defender than Hill and may have similar fortune in sacks. Kevin Williams is also a natural 3-technique defensive tackle who has been asked to play nose tackle in the absence of Brandon Mebane. Williams has been coming off the field in passing situations, but expect a bit more of him as well in Hill’s role.

Kevin Williams is a natural 3-technique defensive tackle, the role Jordan Hill had been playing

The team will definitely want to keep Williams fresh since his priority has to be nose tackle, but I would wager he will see meaningful time as a rush defensive tackle. On a scale of 1-10, with 10 being devastating, the loss of Hill rates around a six.

Losing Lotulelei for the Panthers has to rate far closer to an eight or nine. ProFootballFocus.com is far from perfect (Hill has a negative grade from them), but it can be a useful starting point in evaluating players. Lotulelei was rated as the sixth-best defensive player on the Panthers this year. His replacement, Colin Cole, was rated as the fourth-worst.

Lotulelei was a first-round pick last year that specializes in run stuffing and disrupting the line. I guarantee you opposing teams identify him a player who requires attention and a plan. His ability to occupy blockers makes it far easier for linebackers Luke Kuechly and Thomas Davis to wreak havoc. His absence could increase the chances that guys like J.R. Sweezy are engaging with the linebackers on the second level than double-teaming Lotulelei at the line.

The Panthers only chance to compete in this game is by stuffing Marshawn Lynch and the Seahawks running game. That was at least a possibility with Lotulelei clogging the middle, but a team that already comes in ranked 27th in the NFL in opponent yards per carry at 4.5, and has actually been even worse during their recent hot streak at around 4.7, appears to be incredibly vulnerable to the Seahawks biggest offensive strength. And did I mention Max Unger is back in the lineup?

The Morning After: Seahawks Stomp 49ers with Backups of Backups