Tom Brady is a god. He wins Super Bowls while brushing his teeth in the morning and throws touchdowns while kissing Gisele good night. Bill Belichick is a defensive genius. He can stop entire offenses with one scowl and scoop up any threats with his hoodie. These are the Patriots, boys and girls. They do no wrong (at least on the football field). The Seahawks, on the other hand, are a team that is just a great defense and a good running game. Their offense is “good enough” to compete, but hardly a threat. Not so fast. There is a massive secret that only you get to know because you were smart enough to read this article.

The Seahawks are a running team. Pete Carroll does not try to hide it. Their wide receivers and tight ends are not well know in the league and are often considered the weak part of the offense. Russell Wilson has plenty of doubters remaining about his ability to win a game with his arm instead of just his, and Marshawn Lynch’s, legs.
So it should come as no surprise that the Patriots rank higher in explosive pass plays (defined as 16+ yards) than the Seahawks. New England has had 84 explosive pass plays this year, good for 15th-best in the NFL. Seattle has 74 explosive pass plays this year, which ranks 23rd in the league.
Those numbers are misleading, though, in isolation. No team passed the ball less this season than the Seahawks. So the better question would be that when each team passes the ball, which is more likely to result in a game-changing explosive play? The answer: Seattle, by a landslide.

Brady and the vaunted Patriots passing game is down there with the likes of Shaun Hill and the Rams and Colin Kaepernick. Now, it is worth pointing out that the Seahawks defense is built to limit explosive plays (more on that in a moment), so the fact that New England has a successful offense without relying on explosive plays could prove to be a challenge as Philip Rivers demonstrated earlier this year. History does not support that notion. Drives containing explosive plays are far more likely to result in points than one that does not. This, however, is just passing. We should look at the offense overall.

Myth #2: Patriots offense is more explosive than the Seahawks

No team in the NFL had more explosive plays on offense this year than the Seahawks. They led the NFL with a whopping 61 explosive rushing plays, a good 13 more than the next closest team. To give you some idea of how large of a margin that is, the team with 13 fewer explosive running plays than the second place team on the list is thirteen spots below them. In other words, the gap between #1 and #2 is equal to the gap between #2 and #15.
That helped Seattle to a total of 135 explosive plays. The Patriots had 114. New England fans are smart, and if they are reading this are saying, “But you just finished saying it is not about how many explosive plays you have, but the percentage of your plays that are explosive.” Good point. The news does not get better for Patriots fans. Seattle had 21 more explosive plays than New England despite running 87 fewer offensive plays overall.
“Fine then,” says the guy in the Steve Grogan jersey. “You can have your explosive plays but good luck getting them against Belichick, Revis, Browner and Wilfork!” That does sound difficult. Let’s see how those guys did limiting explosive plays on defense this year.

Seattle, on the other hand, was the best in the NFL at keeping plays in front of them and getting receivers to the ground before breaking big plays.

Wilfork is a bad dude. Dont’a Hightower hits people so hard his apostrophe falls off. They combine with other solid run defenders to make New England a formidable opponent for the power running game of Seattle. But remember that the Seahawks were not just good at explosive running plays, they were far and away the most dominant team in the league in that statistic.

The Patriots are better at slowing big running plays than big passes, but they are hardly dominant. Middling maybe. Dominant? Not so much.

It should also be called out for completeness that a Patriots team that ranks 20th in explosive rushing plays on offense will be facing a Seahawks team that ranks 5th in the NFL in stopping big rushes.

All this adds up to a Seahawks offense that is best in the league at creating explosive plays and a Seahawks defense that is best at limiting them going against a Patriots offense that has trouble finding them and a Patriots defense that cannot seem to stop them. Seattle ranks #1 in the NFL in explosive play differential at +58, where the Patriots check in at #24 with a -11 mark. That is a big deal, and something you probably will not hear anywhere else for at least a week. Feel free to tell your friends. They will be amazed by your knowledge. 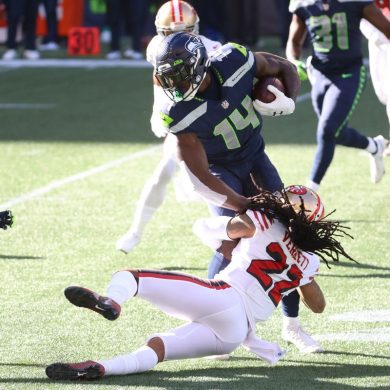