Seahawks fans are familiar with the myriad of records Russell Wilson has been breaking over the past five weeks. What they, and other NFL fans, may not realize is that the league is seeing fantastic performances from a number of quarterbacks during the same stretch. A whopping eight quarterbacks have a passer rating over 100.0 in the last five weeks. That is the same number who have 10 or more touchdowns in that span. An encouraging sign for the league is that many of the names leading the way are guys not named Brady, Brees or Manning. We may look back at 2015 as the year the baton was passed to a new generation of gunslingers.

Wilson and MVP frontrunner, Cam Newton were drafted a year apart. Newton had a massive statistical rookie year, but has only recently grown into a franchise quarterback who appears capable of leading his team to a championship. Wilson has almost the opposite track record. He won immediately with middling pass numbers, and has now added dizzying passing records to his repertoire. These young guns lead all NFL quarterbacks in passer rating over the past five weeks, with Wilson also leading for the whole season.

Wilson’s 143.6 rating over five games is an NFL record. He also leads in yards per attempt, fewest sack yards, fewest interceptions, most touchdowns and highest completion rate. It has been a good five weeks if you are a Seahawks fan. Newton is right behind Wilson in touchdowns, and has only thrown one pick, leading to a sparkling 121.3 rating.

The third name on the list might surprise you. It surprised me. Kirk Cousins, the second quarterback taken by the Redskins in the 2012 draft, is playing some of the best football around. He does not have the touchdown passes that Newton or Wilson do, but an eye-popping 9.0 yards per attempt ranks second. He has also completed 73.8% of his passes, trailing only Wilson. The return to health of Desean Jackson has keyed Cousins emergence, and will make the Redskins a dangerous team should they win the NFC East.

Increase the stretch to the last six games instead of five, and Kirk Cousins rises to second in passer rating (122.6) behind Russell Wilson (132.6), and takes over the lead in completion rate (74.7%)

Matt Stafford was drafted just two years before Newton and is still 27 years old. He struggled mightily earlier in the year, but has come out on fire since the Lions changed their offensive coordinator. A heartbreaking loss to the Packers, along with a fumble at the one yard line against Seattle, has kept the Lions out of the postseason. Should Stafford maintain this newfound accuracy that has him nearly completing 70% of his passes, the Lions will have a chance to get back in the thick of the race next year.

Alex Smith and Carson Palmer are the only two out of the top nine in passer rating who are over 30 years old. Smith is just 31, and should have at least 4-5 years of prime quarterback years ahead of him. His Chiefs are as hot as any team in the NFL, and their formula calls for conservative and efficient quarterback play. Smith, and youngster Teddy Bridgewater, are playing essentially the same type of game. Their numbers are nearly identical. The Seahawks defense made life difficult for Bridgwater, but he is otherwise having a very efficient second year.

Blake Bortles is tied for third in touchdown passes after Newton and Wilson. This has been a breakout season for Bortles, who is throwing as many deep passes as any quarterback in football.

Tyrod Taylor has been playing steady football. If you had asked Bills fans if they would take a 26 year old quarterback with a 97 rating to start the year, most would have jumped at the offer. Taylor has nine touchdowns and only one interception over five games, but the Bills are just 1-4 in that stretch.

Tyrod Taylor has 9 TDs and 1 INT in the past five games, but the Bills are just 1-4 in those games

Palmer has been the most consistent quarterback all year, but clearly does not count as an up-and-comer any longer. He joins Ben Roethlisberger as the only true elder statesmen and recognized elite quarterbacks in the top ten for passer rating. Brady is well down the list after a white hot start to the season. Peyton Manning has struggled all year, and has been out due to injury. Philip Rivers and Aaron Rodgers are closer to the bottom than the top.

If you were to sort this list by touchdown passes, the names change a bit. Wilson and Newton still lead, but Eli Manning and Brady rise. That also highlights another young quarterback, Jameis Winston, who has an impressive 10 touchdown passes in five weeks.

One aspect that tends to separate young quarterbacks from vets is how they handle the increased pressure of situational football. Making the proper pre-snap adjustment and read while facing an exotic blitz from a defense on 3rd down is very different than dropping back on 1st and 10. 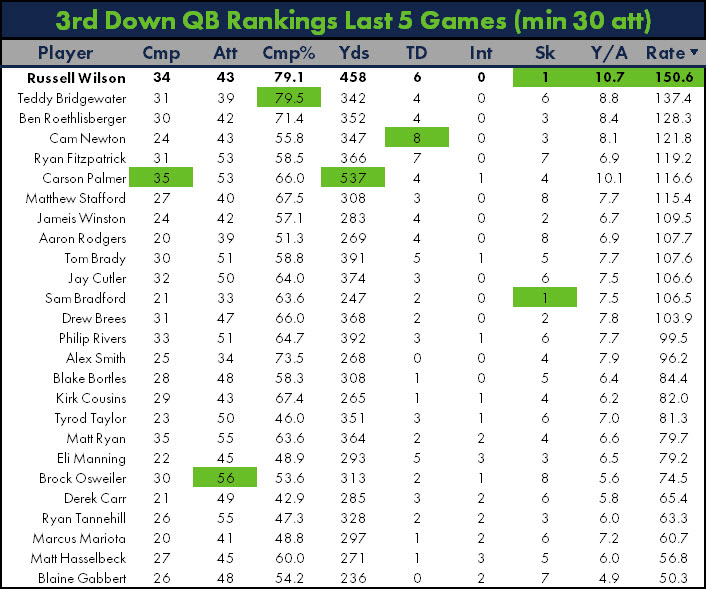 Amazingly, Wilson’s rating is actually better on third downs during his hot streak than it is overall. His 10.7 yards per attempt combined with a nearly 80% completion rate has helped Seattle lead the NFL in 3rd down conversion rate (64.1%) over this period of time. The Steelers are second at 52.8%, so it is not surprising to see Roethlisberger high on this list.

But look at Bridgewater up there at number two and Newton at number four. Maybe even more surprising is to see Winston above Rodgers, Brady, and Drew Brees. Granted, this is just a little over a quarter of a season, but I’m not sure anyone would have predicted Winston would outperform those quarterbacks on 3rd down for one game, let alone five.

Moving into the red zone mixes up the names further. I probably set the minimum attempt bar too low, but guys like Cousins or Bridgewater shouldn’t be left off the list due to lack of opportunity. Brian Hoyer shows on top for passer rating, but he has not played in each game, so his numbers should be discounted. Red zone play should be judged by how often the quarterback gets in the end zone, so the table is sorted that way instead of passer rating. 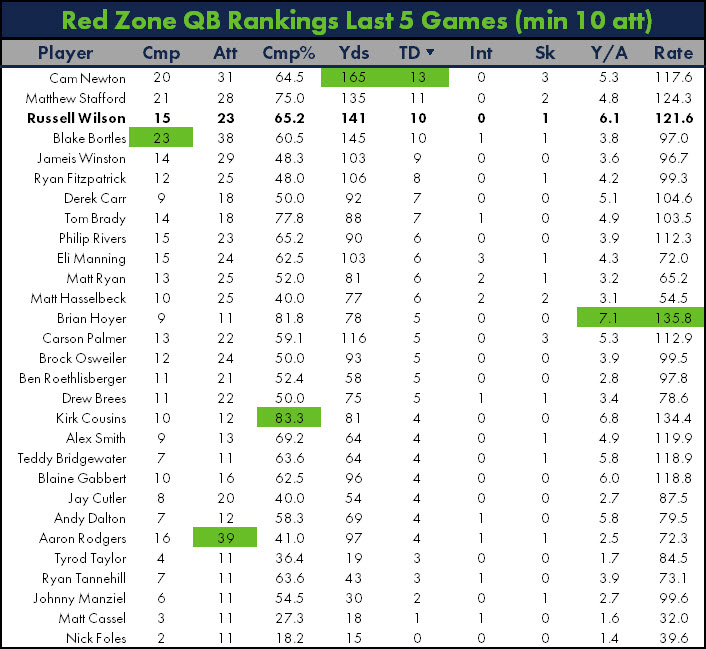 All five of the top performers are 27 years old or younger. Derek Carr joins the list of young quarterbacks making an appearance toward the top of the charts, tied with Brady.

The NFL saw a massive jump in passer efficiency in the early 80s due, in part, to rule changes and the advent of the West Coast offense made famous by Bill Walsh and the 49ers. As you can see below, league average passer rating has been climbing ever since. 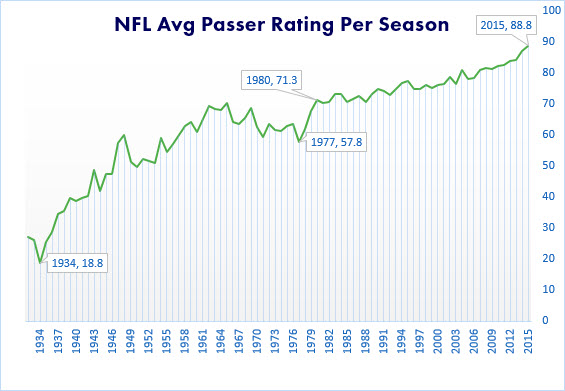 Every year sets a new record for league average passer efficiency. This year represents a 5.0 point jump from where the league was three years ago. That is the largest passer rating jump since 1981, when the three year increase was 8.4.

The league has made it nearly impossible for defenses to slow down the passing game, and these numbers should give the NFL some pause about whether they have swung things too far in favor of the offense.
Some of the credit, though, should go to this new breed of young quarterbacks who were initially seen as incapable of playing within the pocket or were simply dismissed too quickly. Wilson is doing things Dan Marino, Joe Montana, Manning, Brady and Rodgers have never done. Newton is collecting touchdowns like McDonald’s is giving them away in Happy Meals. There has been some consternation about what will happen to the quality of play once legends like Brady, Brees, and Manning retire. If these last five weeks are any indication, the league is going to be just fine.