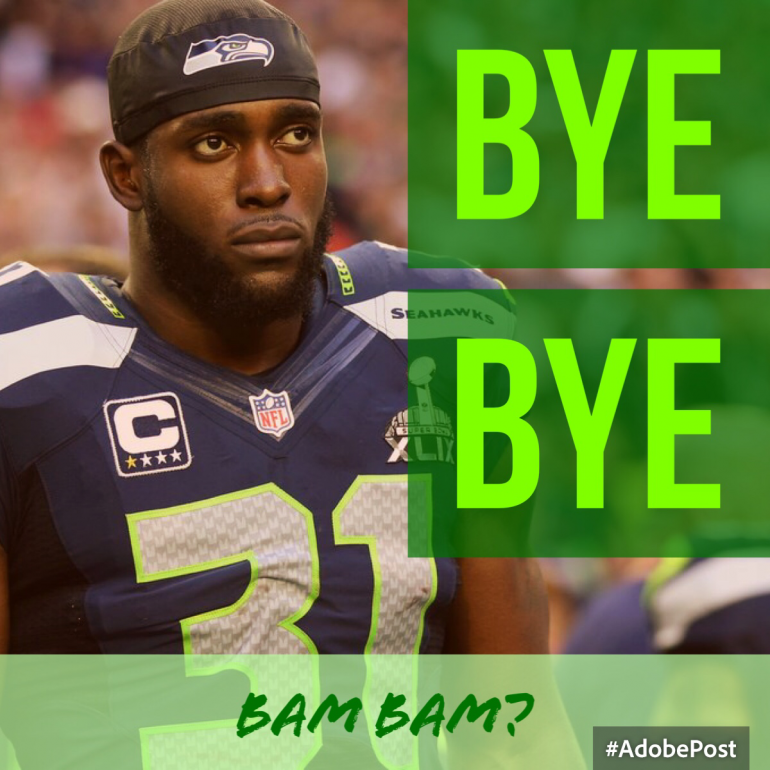 I never watched Kam Chancellor play in college at Virginia Tech. When his name was announced during the 2010 draft as a Seahawks draft pick, I immediately looked him up on YouTube. Never have I fallen in love with a player faster than I did that day. Athletes dream of being built like Kam Chancellor. Fans dream of players hitting like Kam Chancellor. He is everything you want an NFL player to be. Now, he may be patrolling the secondary of another defense for the first time in his NFL career.

Dave “Softy” Mahler asked me a week ago whether I expected Chancellor to return to the Seahawks. I answered, “No.” It was a hesitant answer, but one I have grown more sure of as I studied the 2016 free agent class, especially along the offensive line.  The evidence that Chancellor will be playing elsewhere is all circumstantial and hearsay, but this is not a court of law. Here are the tea leaves as I read them:

1. The relationship between Chancellor and the Seahawks is as strained as any since Joey Galloway

It is no secret that Marshawn Lynch and the Seahawks coaching staff and front office have not always gotten along. Lynch has flipped off the sidelines, held out of training camp, and given them precious little warning about his inability to play in a playoff game. Lynch has never, though, missed a game due to his frustration with the organization.
Chancellor missed two, and was prepared to sit out the whole year. Nothing was done to soothe that festering wound. Chancellor simply decided to come back for his own reasons. You can be sure he still believes he was wronged and is still deeply unhappy with the team. The last Seahawk to miss time during the season due to a contract dispute was Joey Galloway. He was traded the following year. That was a different front office, but the end result very well could be the same.

2. Chancellor did not play to his standards this year

The Seahawks defense has been at its best when Chancellor is at his. He intimidates receivers. He destroys runners. He punishes offensive lineman. That physical nature raises at least some questions about his durability and longevity. He will turn 28 in April, and missed three games this season due to injury, the most of his career.
That led to fewer tackles than any year in his career since his rookie season when he was a role player. In fact, his tackles have decreased each of the last four years:

Chancellor’s tackle rate per game is a good indicator he is far from washed up, but there is a reason people around the NFL say the best ability is availability. You cannot make a tackle if you are not in the game. Chancellor, one of the best open field tacklers ever to step on the field for the Seahawks, missed numerous tackles this year. It was not just tackles. Chancellor had his fewest passes defensed (4) since 2012.

He did not play to his typical All-Pro standards. That has to enter into the equation when John Schneider and Pete Carroll are deciding whether they want to give him more money or an extension.

Lynch got some concession, at least from a PR perspective, for his holdout in 2014. The team guaranteed money in his contract for that year. They also gave him a big raise to bring him back this season. Players and agents would have to look at that and think there might be gold for them at the end of a holdout rainbow.
Schneider wants that to stop. Now. He played hardball with one of the most respected and accomplished players on his roster this past year when Chancellor held out. The reasons he refused to give an inch then apply just as much now. Giving Chancellor more money or an extension this offseason just tells players and agents that holdouts will be rewarded in Seattle.

There was some point during this standoff where the front office went from trying to placate Chancellor to building a plan to move forward without him. I am not sure he did anything this season to make them reconsider that stance.

That means their options are to keep an unhappy player around who is massively influential in the locker room, to give him more money and invite more brinksmanship from more players, or to find him a place where he can be paid and be happy. That last one seems pretty appealing.

Seattle traded a 5th round pick for Kelcie McCray as the Chancellor holdout barrelled toward the season opener. Chancellor was a 5th round pick. Richard Sherman was a 5th round pick. Schneider values those picks greatly, so that was a meaningful investment in the safety position.
McCray got the chance to fill in for Chancellor when he was injured later in the year and responded with two solid games (8 tackles vs Cleveland, 10 tackles vs St. Louis).
Carroll made a point after those games to call out McCray, and went as far as saying something along the lines of, “It’s pretty meaningful for the future, and what we can do at that position.” He made that inference at least twice. I was struck by it then, and it has stayed with me.
He could have just been referring to the backup safety role being in good hands with McCray around, but my read was that it was a subtle indication that he saw enough from McCray to feel good about him as a starter should Chancellor move on.

There is a clear incentive to make the decision about Chancellor now. He is still young enough and talented enough to warrant quality draft pick compensation in a trade. When he was holding out, there were rumors of a first round pick or even multiple first round picks. I doubt anyone will be surrendering that much.
If Seattle can get a first round pick for Chancellor, that becomes an easy decision. More likely, the Seahawks hold out for a second or third round pick. Why would Seattle do that?
Because they also would gain $4.1M in cap space this season, and $7.125M in cap space next season. That could be a starting guard or tackle. Would you trade Kam Chancellor for Kelechi Osemele and a third round pick? I think you would. Schneider might be seeing this as something equivalent.

Schneider talked about how the Seahawks were not always the bullies in 2015, and how they want to get back to that next season. On the surface, trading away your most intimidating player would seem to fly in the face of that goal. That assumes that Chancellor would recapture the level of play he displayed in his first four seasons if he stuck around.

What Seahawks fans need to face is that the days of Chancellor acting as the All-Pro enforcer of their secondary may be behind them whether he stays or goes.

In a world where there is no salary cap, giving a player like Chancellor more money would have probably happened. Schneider and the Seahawks do not live in that world. If Chancellor was happy with his current compensation, a trade would be far less likely. Even if he had not held out as long and caused the Seahawks to trade for a player who they now think could start in his place, Chancellor probably would be sticking around.

I want to see Chancellor happy and playing at his peak. I want to see the Seahawks maximize their cap dollars to win more championships. I don’t believe the both can happen. The Legion of Boom may soon lack legion and boom.