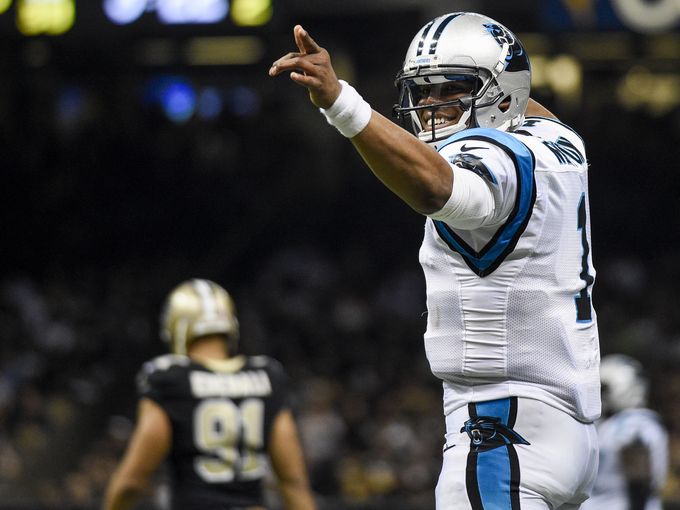 There Is Nothing Wrong With Hating Cam Newton

I didn’t want to write this article. It likely will accomplish as much as sitting down with Trump supporters to try and sway them to vote for Bernie Sanders, or vice versa. Cam Newton is a polarizing figure. The tug of war that surrounds his on-field behavior is almost more fascinating than the unmatched physical talent he brings to the quarterback position. Either you love him or you detest him. That latter groups includes me.

It included me well before the Panthers beat the Seahawks. It included me well before the Panthers went 15-1 and Newton earned MVP honors (or will soon enough). I don’t like the guy. I cheer against him regardless of who is playing him. What’s wrong with that? Well, apparently that means either I am a racist or, according to Larry Stone, a hypocrite. That point of view is almost as obnoxious as Newton’s first down celebrations.

Race is a misplayed card here

“I’ve said this since Day One. I’m an African-American quarterback that scares people because they haven’t seen nothing that they can compare me to.” – Cam Newton

I am never one to deny the role that race plays in influencing people’s opinions and behaviors, but this belief that Newton is somehow being singled out in a league where over two-thirds of the players are the same race he is makes no logical sense. Even narrowing it to quarterbacks debunks the theory.

Is there an uproar about Tyrod Taylor? Russell Wilson? Teddy Bridgewater? Robert Griffin III, when he was playing? Michael Vick? Josh Freeman, when he played? Tarvaris Jackson? EJ Manuel? I guess you could say there has been some controversy surrounding Geno Smith, but mostly because he is terrible at his job. Jameis Winston is a little polarizing, but that will happen when you are accused of sexual assault and have multiple run-ins with the law. Ask Ben Roethlisberger.

I unwittingly walked into this racial hornet’s nest a few months ago when I tweeted this during a Panthers game:

Cam Newton preens and gets the pub. Luke Kuechly is about 5X the player Newton is and never asks anyone to notice.

I expected people to challenge me on the point I made. Saying Kuechly is “about 5X the player Newton is” was meant to be a provocative statement to debate. I made it because I think Kuechly is still unappreciated around the league despite All-Pro and Defensive Player of the Year honors. He is the best player at his position in the NFL, and will go down as one of the best of all-time. Yet, as the Panthers were getting more attention for their undefeated (at the time) season, all the headlines were about Newton.

Newton was not even a Top 5 player at his position before the second half of this year. Some may have had him outside the Top 10. That is not a controversial or racial statement. Consider that when the NFL players voted for the Top 100 players last year, Newton ranked #73 and Kuechly ranked #14. Guess what happens when you take 14 x 5? Somehow, I doubt NFL players were accused of racism when their votes were tallied.

As someone who was raised a Jew, I am very sensitive to the power and pain prejudice can bring. Even just writing that sentence will almost certainly result in at least a few anti-semitic comments. I grew up in a town with literally one other Jewish kid, where being “jewed” out of things was common vernacular. I have been checked for horns and a tail.

Nobody should deny the role that prejudice plays in our society, but we must also be judicious in deciding when to pull that card, or run the risk of being ignored when it really matters.

Disliking Newton for preening after first downs and dabbing after touchdowns sits right next to despising Julian Edelman for taunting opponents and yelling in their faces after catching a 6-yard pass for a first down, or Aaron Rodger putting on the championship belt in the end zone. That is not about race. It is about arrogance.

The thesis of Stone’s article this morning was that Seahawks fans should take a long look in the mirror before criticizing Newton for showboating. Richard Sherman has done it. Marshawn Lynch has done it. Golden Tate has done it. Therefore, we have lost our right to criticize or dislike other players who do it. Poppycock.Two players score a touchdown. One plays for your team. The other plays for the opponent. Are you a hypocrite for being angry about one and cheering the other? Double standards are built into the very foundation of the games we watch.

Hating opponents is part of sports. One of the best parts of any sport is rivalry based on sports hate. Sports hate is the notion that you hate a person or a team, and it may be for something as ridiculous as a single play by a player two decades ago who doesn’t even play on the team anymore. If fans liked every team and every player and did not care who won or who lost, who succeeded or who epically failed, it would lose much of its luster.
It can obviously be taken too far. Fans beating opposing fans, or even silly things like this petition floating around trying to ban Newton from CenturyLink Field, goes well beyond appropriate behavior. Simply disliking the guy, though, should be fair game.
If Tate had played for another team and waved at the Seahawks secondary, while running into the endzone, as he did to the Rams a few years ago, he would immediately go on my hate list. I would enjoy watching every time he dropped the ball or took a big hit. I would hate it even more when he scored against the Seahawks than other players on his team.
I don’t blame opposing fans for disliking Sherman or Lynch, or even choir boy Wilson. That is part of sports.

Calling out Newton for his antics is not hypocritical, anymore than calling out Colin Kaepernick for kissing his bicep or Tom Brady for evading NFL sanctions. It is not even reserved for players. We hated Jim Harbaugh more than we will probably ever hate Newton.

Harbaugh was obnoxious. Newton is obnoxious. I don’t see how that is controversial or hypocritical. Running away from your teammates, pausing, smiling and pointing after every single first down you get is obnoxious. Implying that you are Superman after scoring a touchdown is obnoxious.
There is a difference between celebrating and gloating. There is a difference between being emotional and being arrogant. Newton is very clearly on the wrong side of both those lines.
Where Newton is absolutely right is, if you don’t like it, stop him. He could flip his middle finger at the opposing sideline after every first down if he wanted. He gets to choose what to do when he makes a good play. If he wants to be provocative, that is his right. It is my right to dislike him for it. Why that is more hypocritical than disliking Kaepernick or Brady is puzzling.

The idea that Seahawks fans are sitting on a high horse, as Stone indicated, for calling out Newton is ironic. From my vantage point, it is the people equivocating his behavior and patronizing fans for disliking opponents, who are being pretentious.
This is the way sports works. It is about bravado and ego and competition. There are good guys and bad guys, opponents and teammates. When a player chooses to do things to put himself in the spotlight, you can be sure not everyone will like him. That seems as natural as a shotgun snap.
The fact that Newton and the Panthers beat the Seahawks twice this year and that there is some animosity brewing between the fan bases seems like the ingredients for a great cross-division rivalry in coming years, possibly akin to Manning/Brady or 49ers/Cowboys. There is no reason to douse the flames.
Stone is a convenient target today, but his article was simply the straw that broke my back on this topic after plenty of media members and fans, local and national, have been joining the “the Cam criticism is racist” and “Seahawks fans are hypocrites” train.
The one person who does not seem bothered by all the criticism is Newton. He is feeding off the haters, and proving he is a great player every week. I will be cheering against him this Sunday because I can’t stand him. He will be trying like crazy to win his first Lombardi Trophy and rub it in my face, along with every other critic. Everything is exactly as it should be.