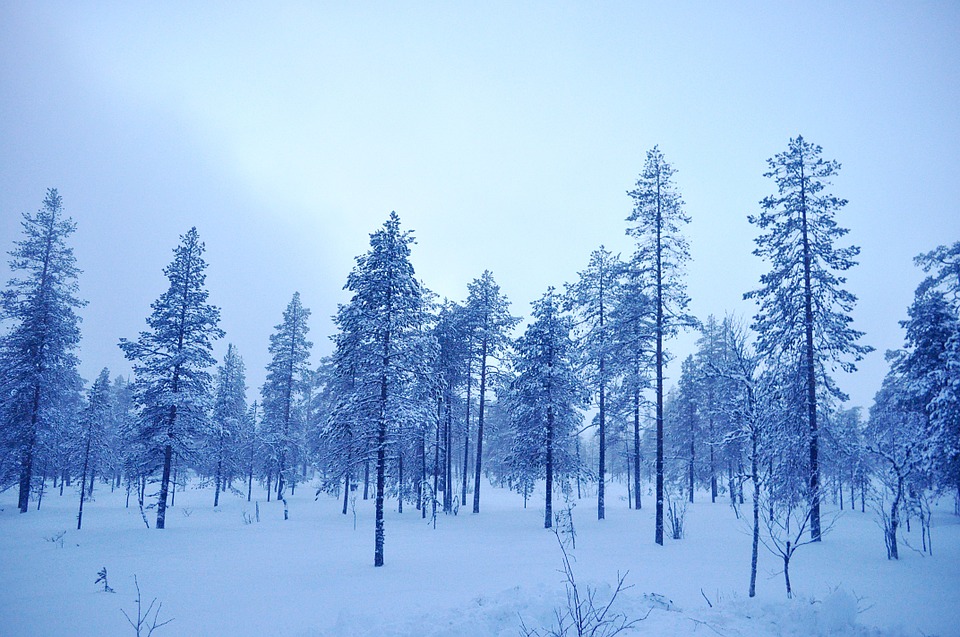 Will it be cold when the Seahawks travel to Minnesota to play the Vikings this weekend? Ya, sure, youbetcha. The current forecast calls for a high of 1 degree on Sunday. Pete Carroll mentioned in his press conference this morning that cold weather can impact handling of the football, which makes sense, but I found myself wondering if there was evidence to support that claim and what other effects I might discover. The results were eye-opening.

Thank goodness for Pro-Football-Reference.com. We are lucky to have such a great research tool at our disposal. They just so happen to have a way to search for games by temperature. It only works for games back to 1960, but that seemed like plenty of data to play with.
The way I wanted to get at the question was to compare warm weather games, which I chose to define as greater than 50 degrees, to cold weather games at decreasing temperature thresholds. These were limited to outdoor games, of course, to make it a more apples-to-apples comparison.
There were literally thousands of warm weather games, so I decided to just pull the last thousand games, which dated back to 2008. There were fewer cold weather games, but I grabbed a thousand of those as well, which dated back to 1997. This introduces a little fudge factor considering that scoring rates in the NFL have changed over those times, but I preferred a larger sample size. Also, relax! This is all just directional research. 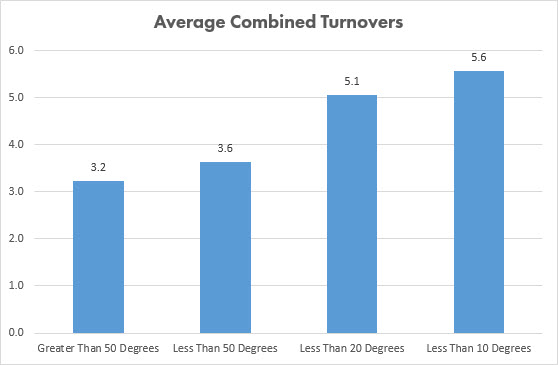 The average number of turnovers in warm weather games was just over three. If you just look at games under 50 degrees compared to games over 50 degrees, the difference appears negligible (3.6 vs 3.2).

However, as you start to lower the thermometer, that ball starts coming loose. Drop the temp below 20 degrees and you see a 42% jump in combined turnovers. Drop it down below 10 degrees, and the turnover rate jumps another 10%, closing in on nearly double the warm weather rate.

Conclusion: If your team is playing a game outdoors in sub-freezing temperatures, expect turnovers to play a major factor in the outcome, even more so than a typical game. The colder the game, the more turnovers should be expected.

My next question was how cold weather affected offenses. The hypothesis would be that they have a harder time moving the ball when it gets cold. Let’s see if that is true. 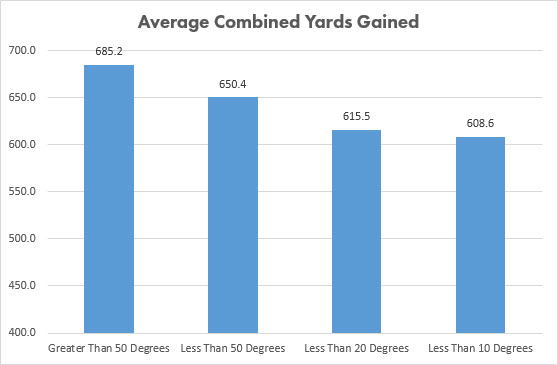 There appears to be a modest impact to how many yards offenses gain. Games under 50 degrees saw a 5% drop in combined yardage compared to warm weather games.


Again, the lower the temperature drops, the greater the impact, although it is less so for yardage. The difference is just 10% in combined yards between a game played when it is less than 20 degrees and one that is over 50 degrees. There does not appear to be a significant difference in yardage between cold and super cold games, as the under 20 and under 10 degree games are roughly equivalent.

Yards are one thing. Points are what the game is all about. I expected points would drop with the temperature, and that is exactly what they did. 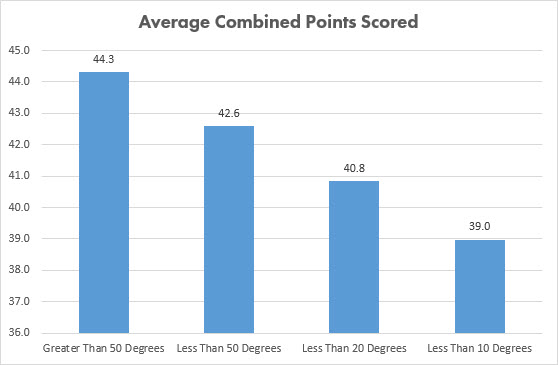 Points behave in similar fashion to yards as related to temperature. There is only an 11% drop from warm weather games to the under 10 degree frigid affairs. That is a sizable difference, but not nearly as big of a change as turnovers.

One difference between points and yards is that points steadily decrease with temperature, where yards appeared to level out.

I found myself wondering if this drop in points affected the home and road teams in the same way. One would think home teams would handle the weather a little better given they are accustomed to it. To figure this out, I broke out the average points scored by the home and road teams based on temperature as well. The results were clear. 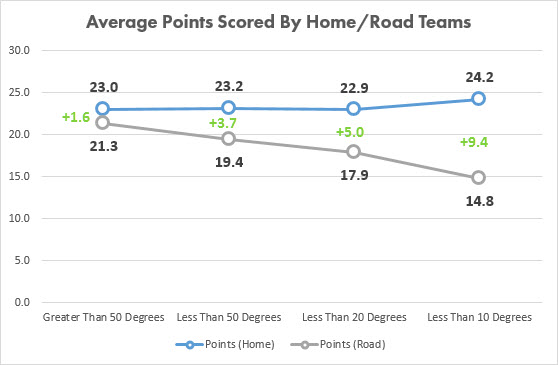 Home teams seem impervious to the temperature, and even gained some points in the coldest of games. Road teams suffered mightily. The average margin of victory grew from 1.6 points in warm weather games to 9.4 points in under 10 degree games.

There is admittedly a smaller sample size for games under 10 degrees, but the trend is not hard to decipher. Home teams are 28-11 in games played in temperatures below 10 degrees, dating back to 1960. Just two road teams have won a game in those conditions by more than seven points.

Conclusion: Cold weather games represent a significant advantage to the home team. The colder the weather, the bigger the advantage.

What it means for the Seahawks

There is already plenty of reason for the Seahawks to expect a tougher game against the Vikings this time than their last match with Minnesota. Injured stars on defense will be back for the Vikings, and adjustments are sure to be made. This data on weather increases the importance of taking care of the football and scoring points.
Seattle is one of the best teams in the league at protecting the football, while Adrian Peterson is annually among the league leaders in fumbles. The Seahawks defensive advantage over the Vikings offense is considerable, as evidenced by the 125 yards and 0 points they scored in the first game. They will need all of that advantage to come out with a win, and any win they get is highly unlikely to be by more than a touchdown.
This game will be close. Closer than anyone in Seattle wants it to be.