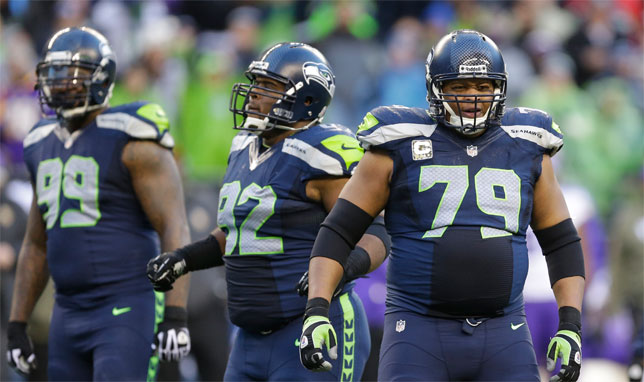 Seahawks In Search of Toughness

John Schneider made the rounds on local radio last week giving his appraisal of this past season and where the team wants to improve during the offseason. One offhand comment he made stood out and put a smile on my face. He said he wanted the Seahawks to get tougher. There were times, he explained, when the Seahawks were the bully and times when they were not. They always want to be the bully. This was a silent undercurrent in a season that fell short of expectations.

Everyone knew the Seahawks were going to face challenges keeping together their talented group from 2012 and 2013. Departures were expected and necessary to hold onto the core players. There are very few decisions Schneider made about who to let go that have come back to bite him.
Consider, though, the aggregate impact of some of these players who moved on: Red Bryant, Tony McDaniel, Alan Branch, Breno Giacomini, James Carpenter, Max Unger, Brandon Browner, Chris Maragos, Golden Tate, Zach Miller, Jeron Johnson, Chris Clemons, Clinton McDonald.
Each of those players was replaced by someone who arguably is less physical. That does not mean it was a downgrade. Would anyone rather have Clemons than Cliff Avril, or Bryant instead of Michael Bennett? Again, this is not about whether the front office made the proper talent evaluation. It is about whether this team has lost too much of its nasty edge of intimidation.
Bryant was a one-trick pony, and left the team largely without a pass rush on one side of the field, but there was not a single offensive line in football that could blow the Seahawks off the ball.
Similarly, Giacomini and Carpenter have serious flaws, but their combination of aggression and brute strength helped the Seahawks line run successfully against eight-man fronts and defenses as physical as the 49ers at their peak.
This Seahawks team struggled at times to win the line of scrimmage. It was especially evident on offense, but the defensive line lacked a physically dominant player. Bennett and Avril are master technicians, but both are undersized.
Toughness does not need to just come from the starters on the offensive and defensive lines. Tate was as physical as any receiver in football. Miller was tough as nails at tight end. Browner is the most badass cornerback in football, even with his flaws. Maragos and Johnson were assassins on special teams. As productive as Jordan Hill was last year, he does not approach the physical style of McDonald as a backup lineman.
None of this is to say the Seahawks lack tough players. They have a ton of them. It simply means a team that used to win some games just walking off the bus, has lost that overwhelming edge of physical intimidation.

The good news is that adding physical players is a lot easier than adding talented players. Guys like Browner, Bryant, McDaniel, and Giacomini were available because they were incomplete. Even Kam Chancellor slide to the fifth round because of concerns about his ability to handle the finer points of the safety position.
Physical intimidation used to be an important part of the Seahawks talent evaluation when Pete Carroll and Schneider first arrived. That seems to have morphed into a search for grit, which is another form of toughness defined more by mental determination. They may have oversteered there. The most determined undersized player will still lose a lot of battles against a more physically dominant one.
When you look at Kawann Short and Star Lotulelei in Carolina, or Aaron Donald and Michael Brockers in St. Louis, you see physically dominant duos who made life miserable for Seattle. Three of those players were first round picks. Short was a second round pick. In fact, Carolina drafted Lotulelei and Short back-to-back in 2013 with their first and second picks. The 49ers used a similar formula when they doubled up on badass offensive lineman Mike Iupati and Anthony Davis with their first two picks in 2010.
The best way to infuse your team with toughness is to invest your most precious draft choices in your lines. It is not gluttonous to pick two defensive tackles or two interior lineman with your first two picks. Create a pile.
The closest the Seahawks have come to doing that was in 2011 when they selected Carpenter in the first round and John Moffitt with their second pick (which was in the third round). It did not work out exactly as planned, but Carpenter did start for a number of years and was a road grader in the run game.
This upcoming draft is the best chance Seattle has had in years to stock up on both sides of the line. The Seahawks have a 1st-round pick, along with a pick in the 2nd-round, and two picks in the 3rd-round. Invest them all in the DL and OL and do not look back.

Some of the Seahawks toughest players are currently in purgatory. Nobody on the team is tougher than J.R. Sweezy. Ask anyone in that locker room. Bruce Irvin is a Pittsburgh Steelers-style linebacker with unmatched physical talent. Marshawn Lynch is likely retiring. Brandon Mebane and Ahtyba Rubin are both free agents. Kam Chancellor could find himself playing elsewhere if the two sides cannot find an amicable way to address his contract concerns. Will Tukuafu is a free agent.
Schneider has to consider physical intimidation and toughness when making his decisions on these players during the offseason. Some of that evaluation may even push some of these players out the door. Chancellor, for example, had one of his least intimidating seasons to date. Perhaps it is time to sell high there and get another draft pick and cap space.
Irvin and Sweezy are two players I would work hard to keep specifically because of the toughness they bring combined with their above average productivity. Are there better players at their position? Of course. Are their tougher players at their positions? Not many.
Seattle took a step back this year in being able to physically dominate the line of scrimmage. The NFC Championship was just the latest example. Schneider has done a great job retaining the core group of young talent, and has the ammunition this offseason to surround them with more badasses to help them return to their rightful place atop the NFL. 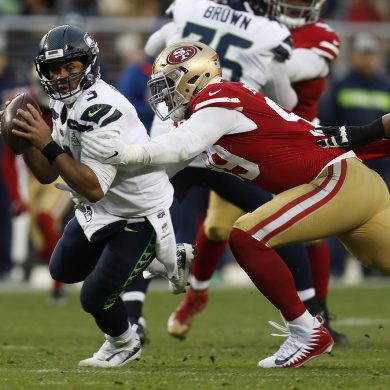